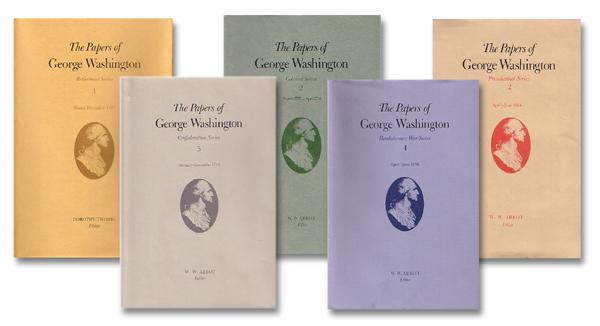 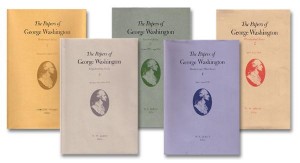 Presenting documents for scholarly and public use is the primary purpose of The Papers of George Washington. Reviews further this purpose, and project members have found 169 such assessments published in traditional print as well as digital outlets between 1977 and 2018. Happily, the overwhelming consensus among reviewers is that the edition admirably serves its large intended audience.

Initial reviews appeared in 1977 after publication of the first volumes of George Washington’s diaries.1 That year saw ten reviews, a number not reached again in a single year until 1996 and 1997 when reviews addressed volumes in multiple series, including the Colonial Series, Revolutionary War Series, Confederation Series, and Presidential Series.2 The number of reviews dropped off sharply after those high years and typically have fallen between one and two over the opening years of the twenty-first century. The largest number since then has been four, seen in 2001 and 2012. Reviews in those years addressed the Retirement Series as well as the Revolutionary War Series and Presidential Series.3

Review authors can be divided into three main categories. Academic historians affiliated with a college or university form the largest group with fifty-eight representatives. An unscientific gauging of reputation rates twenty-five of these individuals as well-known, of whom at least eight have passed away. Among the most recognizable names are British scholar Marcus Cunliffe; eminent early Americanists Richard B. Morris, Jack P. Greene, and Pauline Maier; military historian Don Higginbotham; and Mary Beth Norton, president of the American Historical Association, 2017–18.4 Public historians working in museums, historical societies, or state archival agencies form the next largest group with fifteen representatives. Brent Tartar, acclaimed for his many works on Virginia history, and Howard H. Peckham, archivist and longtime director of the William L. Clements Library at the University of Michigan, are notable in this category.5 Documentary editors, with twelve representatives, compose the third group. Gregg L. Lint, for many years an editor with The Papers of John Adams at the Massachusetts Historical Society, wrote five separate reviews that assessed volumes in three different series.6 Six other reviewers cannot be categorized readily. Three worked as librarians, and one, Charles C. Wall, served for many years as the resident director at Mount Vernon.7

Over twenty journals and digital outlets have published reviews. The greatest number—twenty-five—have appeared in The Journal of Southern History, the earliest in 1979 and the most recent in 2016.8 Among other major historical organizations, reviews have appeared most frequently in The Journal of the Early Republic (ten); The Journal of American History (eight); and The William and Mary Quarterly (seven). Until the last ten years, state historical society journals regularly published reviews. Leading the way were The North Carolina Historical Review (twenty-four), West Virginia History (twenty-one), and The Pennsylvania Magazine of History and Biography (nineteen), followed by Pennsylvania History and The Virginia Magazine of History and Biography (both with eight). The sole known digital outlet has been H-Net Reviews.9

Don Higginbotham, who eventually wrote five reviews, opened his first on volumes 1 and 2 of The Diaries of George Washington by describing them as “superb.” He especially liked the maps and illustrations because they gave a “‘feel’ for the man and his times in ways that are seldom experienced from reading such an edited work.”10 Frequent reviewers similarly praised subsequent volumes. John Ferling, now professor emeritus at the University of West Georgia and a prolific author on Founding Era subjects, noted in the first of his eventual seventeen reviews that the initial volumes in the Colonial Series met “the same high standards attained by the editors of [Washington’s] diaries.”11 Charles Royster, known for his innovative treatments of people’s experience during the Revolutionary War and now retired as the Boyd Professor at Louisiana State University, commented on the same two volumes: “For insight into Washington’s character these volumes have much to offer.”12 Royster eventually published ten more reviews in the same journal—The Journal of Southern History. His final review appeared in 2012 and covered volumes 18–20 of the Revolutionary War Series.13

Mary A. Y. Gallagher, once a documentary editor on The Papers of Robert Morris and now with The Selected Papers of John Jay, published a review of all four volumes in the Retirement Series. Gallagher chided the editors for not stating their annotation policies at the start of the series and omitting volume introductions that could have highlighted significant themes, but concluded: “Its flaws are few, its virtues many. It waits for scholars to publish articles that will call the attention of the historical profession to the wealth it contains.”14 Military historian Caroline Cox began her review of volume 20 of the Revolutionary War Series: “It is always a pleasure to welcome a new volume of the George Washington Papers.”15

Publication of The Papers of George Washington Digital Edition (PGWDE) on Rotunda, the digital imprint of the University of Virginia Press, sparked the appearance of two reviews in 2007 and another in 2008. Susan Holbrook Perdue, who has enjoyed a long and diverse career in documentary editing, prepared the last entry. She commended both “editors and publisher of PGWDE,” who “spent a good deal of time and energy developing an elegant interface that enables readers to navigate the edition.” Perdue also commended the editors for their intention to correct errors or irregularities as they came to light, a practice that ensured purchasers would receive “a superior product in every respect for any scholarly work on George Washington.”16 It will be interesting to see how reviewers respond to the inevitable new developments in the electronic delivery of edited Washington documents.

As members of The Washington Papers look toward the future, we continue to widen our search for reviews beyond traditional scholarly journals and outlets to more informal social media posts and comments—always keeping in mind our goal of reaching the broadest possible audience. We are very eager to see reviews of Washington Family Papers publications, beginning with George Washington’s Barbados Diary, 1751–52, which appeared earlier this year.17 As it was when the project started nearly fifty years ago, editors and staff want their work to live for generations, and favorable reviews help this desire become a reality.18

We have made some reviews of The Washington Papers available on our site, which you can find here.