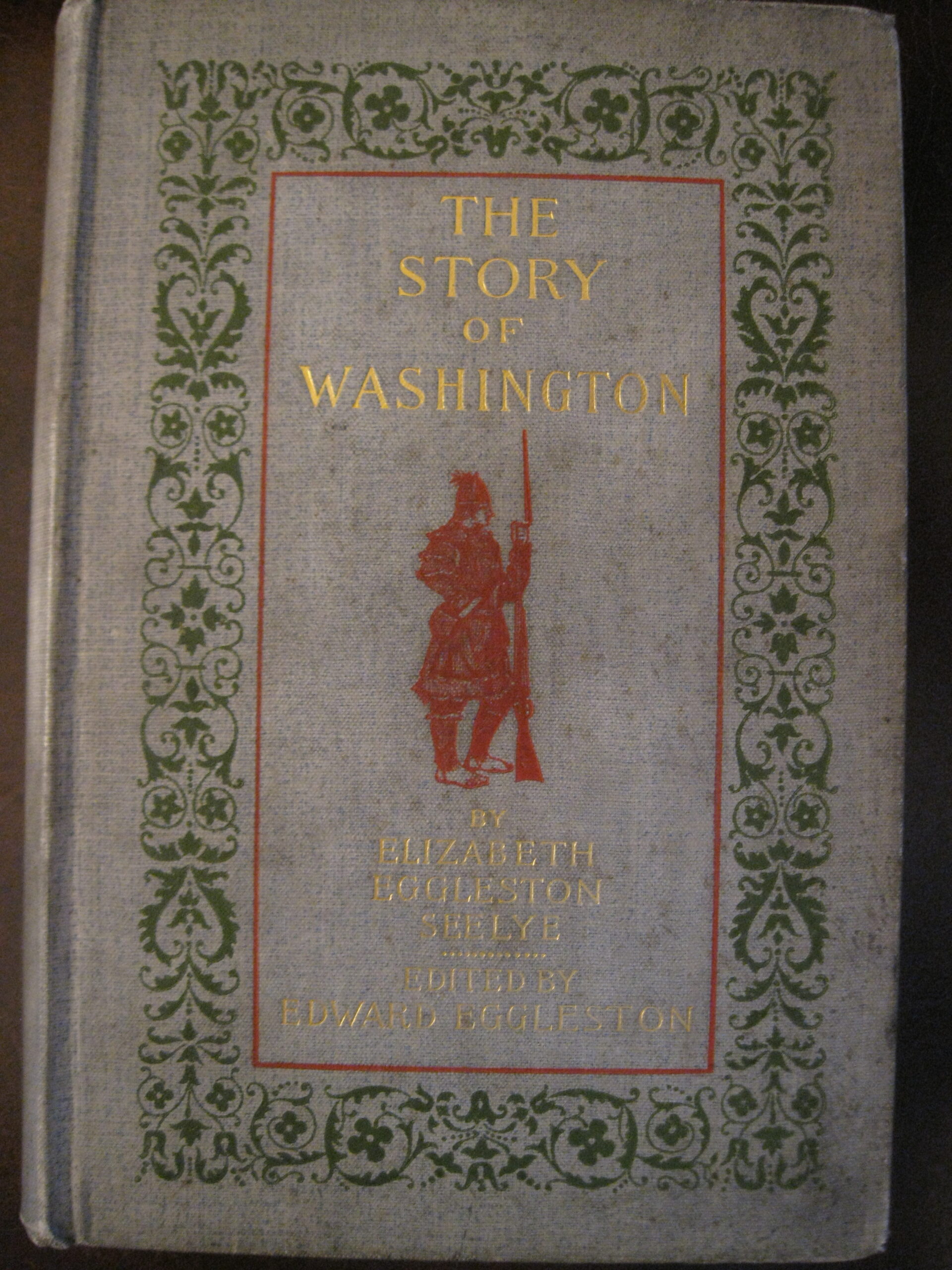 The best way to describe the Washington biographies by Elizabeth Eggleston Seelye (December 12, 1858 – November 11, 1923) and Lucy Ellen Guernsey (August 12, 1826 – November 3, 1899) would be as family affairs. The Story of Washington was written by Elizabeth, illustrated by her sister Allegra, and edited by her father, Edward. Meanwhile, Washington and Seventy-Six was written by Lucy and her sister Clara. A distinctly feminine voice permeates the pages of the two books. Both authors focused on Washington’s public life and placed a strong emphasis on the female connections that shaped the man. Seelye, in a chapter dedicated to Washington’s marriage,  described that the general carried a miniature of his wife for forty years.1 Guernsey similarly provided a full chapter on marriage, and also brought to light that despite the frosty relationship between Washington and his mother, he still took the time to send her letters.2 The deliberate inclusion of women in the biographies is a direct reflection of the female identity of the authors.

The authors shared similar backgrounds and motivations in writing their biographies. Elizabeth’s father was a known historian and children’s author who bestowed on his daughter the same passion to disseminate history to a younger audience.3 She collaborated with her sister Allegra on other American biographies like The Story of Columbus (1892) and Tecumseh and the Shawnee Prophet (1878). She had six children  from her marriage with Elwyn Seelye, founder of the New York State Historical Association. Lucy Guernsey, despite never having children herself, was a life-long advocate for children’s education, which is illustrated by the fact that her book was published by a Sunday school union. Her career was not limited to writing but also included charity work at the Rochester Female Charitable Society.

Both authors wrote in a simple and accessible manner that results in an appealing tone. When detailing Washington’s morning routine, Seelye described it more like several bullet points and concluded with how Washington “made his breakfast of Indian cakes, honey, and tea.”4 They also included interesting illustrations and maps that help keep the interest of their readers. Here, Allegra Eggleston’s talent as a trained artist shines with her vivid portraits of Washington’s family and other close connections (like the two children of Martha Washington from her marriage to Daniel Parke Custis).5 Seelye and the Guernseys did not write for an expert audience, but for adventurous and curious children who wished to know more about early American history. Edward Eggleston wrote in the introduction that his daughter’s book was made to introduce George Washington to the general reader and “especially the young reader.”6 Guernsey wrote how Mrs. Washington read to her son George “Sir Matthew Hale’s Contemplations Moral and Divine,” and subsequently lamented how Sunday-school boys and girls in her time lacked the moral foundation that George’s mother had instilled in him.7 The preoccupation of both authors with the upbringing of America’s next generation is an aspect of their work perhaps attributable to their being female biographers.

Differences are visible as well. An avid bibliophile from a young age and heiress to a long line of writers, Elizabeth was raised by her father into a literary occupation.8 Intelligent and multilingual, her proficiency with German most likely helped her translate the commentary included with a drawing by a German officer.9 Her elite education gives her biography an academic feel, particularly evidenced by the inclusion of maps that situate an older reader in the action. The Guernsey sisters were deeply influenced by the values of domestic fiction that explored morality and Christianity among 19th-century women.10 There is a large religious dimension to their biography in their portrayal of Washington as a pious person with strong moral beliefs.11 Lucy Guernsey concluded her biography by stating her hope that the reader gained through Washington “a closer love for that God whom he served.”12

The two biographies are intimate studies of George Washington that very much reflect the backgrounds and interests of the Egglestons and the Guernseys. Elizabeth Eggleston Seelye and Lucy Guernsey created books with the touch of a mother, a sister, and a daughter––women who understood that the true measure of a man lies in those closest to him: family.