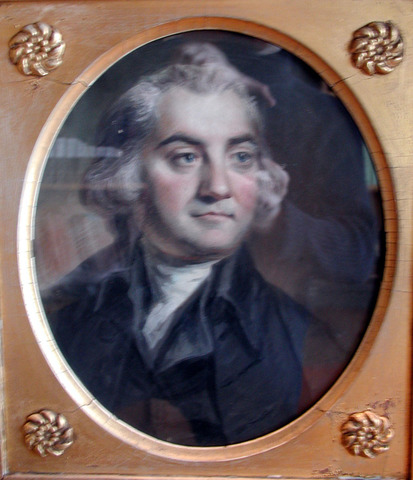 When you work at The Washington Papers, you read plenty of fawning 18th-century letters and news articles about George Washington—which is why Rev. Jonathan Boucher’s dismissive description, written in his memoirs in 1786, struck me as something interesting:

I did know Mr. Washington well; and tho’ occasions may call forth traits of character that never would have been discovered in the more sequestered scenes of life, I cannot conceive how he could, otherwise than through the interested representations of party, have ever been spoken of as a great man. He is shy, silent, stern, slow and cautious, but has no quickness of parts, extraordinary penetration, nor an elevated style of thinking. In his moral character he is regular, temperate, strictly just and honest (excepting that as a Virginian, he has lately found out that there is no moral turpitude in not paying what he confesses he owes to a British creditor) and, as I always thought, religious: having heretofore been pretty constant, and even exemplary, in his attendance on public worship in the Church of England. But he seems to have nothing generous or affectionate in his nature.1

This description made some waves in the late 1800s when Boucher’s memoirs were finally published, an era in which many U.S. history classes upheld Washington as the definition of greatness. So, who was this man who found Washington so unimpressive?

Jonathan Boucher was a Loyalist and a clergyman in the Church of England, who also tutored Martha Washington’s son, John “Jacky” Parke Custis. Boucher was born in Cumberland, England, the child of an aristocratic family that had fallen on hard times. Around 1761, Boucher became a rector of Hanover Parish in Virginia and started a school for “the sons of the first persons of the first condition in the colony.”2 A talented writer who could sometimes be too witty for his own good, Boucher wrote in his memoirs that “even my good principles and good sense seemed no sufficient security to her [his wife] that I would not one day or other in some strange humour do some capitally foolish thing.”3

In 1768, George Washington asked Boucher to admit his stepson, John “Jacky” Parke Custis, to his school in order to “make him fit for more useful purposes, than a horse Racer &ca.”4 Boucher kept a steady correspondence with Washington, and his descriptions of his new pupil make for entertaining reading. In a 1770 letter, Boucher wrote, “I never did in my Life know a Youth so exceedingly indolent, or so surprizingly voluptuous: one wd suppose Nature had intended Him for some Asiatic Prince.” Recounting Jacky’s behavior upon meeting an eligible young woman, Boucher wrote, “Jack has a Propensity to the Sex [women], which I am at a Loss how to judge of, much more how to describe.”5

In June 1770, Boucher moved from Hanover, Va., to Annapolis in order to serve as the new rector of St. Anne’s Parish.6 He took Jacky and one other student with him. During his time there, Boucher became increasingly nervous about the political state of America, in particular the “Banditti of furious Dissenters in yonder mischief-making Northern Governm’ts.”7 He made the poor decision to pick a fight in the Maryland Gazette (Annapolis) with two lawyers, Samuel Chase and William Paca, on the subject of a tobacco tax. Ostensibly the fight was about the validity of one Maryland law, but in the course of three months of “a long, keen and wearisome newspaper contest,” it became clear that the debate was actually about American independence and that Boucher was on the unpopular side.8 Boucher’s evocative writing style, which makes his correspondence so fun to read, in this case proved harmful. After accusing his opponents of “loose and fluctuating counsels,” “artifice and insincerity,” and “acting in direct opposition to the principles you avow,” he opened the floodgates for a nasty public spectacle.9

While Boucher fought politics in the newspapers, his pupil Jacky Custis managed to secretly become engaged to Eleanor Calvert. Boucher insisted that he never had “the most distant Suspicion of any such Thing’s being in Agitation” and was actually a bit hurt that Jacky hadn’t told him.10 Shortly after this revelation, Jacky left Boucher’s tutelage for good, and the relationship between Boucher and George Washington grew more tenuous.

As America began to move towards revolution, Boucher continued to publish his thoughts “to check the immense mischief that was impending.”11 This made him wildly unpopular. He wrote in a letter to a friend that “I received sundry messages and letters threatening me with the most fatal consequences if I did not (not desist from preaching at all, but) preach what should be agreeable to the friends of America.”12 At one point, having been warned not to appear at his church or else he would face physical violence, Boucher responded by bringing two pistols with him to the pulpit. He wrote that a mob of 200 men surrounded him, but he “laid Hold of one of their Head-men, a vile Scoundrel, & swore in my turn that if every Violence and Indignity to my Person was not instantly forebore, I would that Moment blow his Brains out.”13

Around this time, Boucher ran into his former acquaintance George Washington on a ferry crossing the Potomac. According to Boucher, Washington, on the cusp of taking command of the army, was on his way to the 1775 Continental Congress. Boucher wrote, “I shall for ever remember what passed in the few disturbed moments of conversation we then had.” He warned Washington that the country was heading towards a civil war, to which Washington allegedly promised “that if ever I heard of his joining in any such measures I had his leave to set him down for everything wicked.” Boucher concluded, “So little do men know of themselves, and so dangerous it is to make one false step.”14

After fleeing his house due to threats of violence, Boucher wrote a letter to Washington, dated Aug. 6, 1775, in which Boucher’s tone has transformed from admonition to disdain: “On the great points so long and so fruitlessly debated between us it is not my design now again to solicit your attention.” Boucher declared that “all those who with you are promoting the present apparently popular measures are the true enemies of our country.” He concluded, “You are no longer worthy of my friendship: a man of honour can no longer without dishonour be connected with you. With your cause I renounce you.”15

Despite his obvious political bias, Boucher’s description of Washington ought to be considered seriously. This was a man who knew Washington as a Virginian, not as a president or national symbol, and, although his flowery writing style can tend towards exaggeration, his description reveals a side of Washington which we do not often encounter. Boucher’s time in America and proximity to Washington earned him enough credibility in London to publish a book called A View of the Causes and Consequences of the American Revolution in 1797. His descriptions of Washington and the revolution, while almost shocking to some Americans, provide insight into the Tory perspective and shed light on the charged political atmosphere of America in the 1770s.