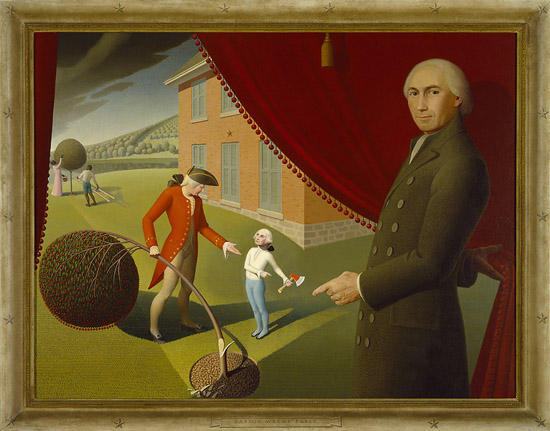 “I cannot tell a lie.” A young George Washington allegedly spoke these words to his father after being caught cutting down a cherry tree, confessing his transgression. As we now know, this tale was concocted by Washington biographer Mason Locke Weems in the early 19th century. While it was meant to illustrate young George’s virtues as a worthy hero, it has also been used throughout the years as a moral lesson to American youth. If George Washington could tell the truth in such intimidating circumstances – shouldn’t you?

Literature and theatrical performances have long been used as a platform for moral education, and George Washington himself did not escape such lessons. The first recorded reference of George attending a play was during his brief trip to Barbados when he was 19 years old. George and his older half-brother, Lawrence, were visiting the island with the hope that the tropical climate would cure Lawrence’s pulmonary difficulties. James Carter, a well-connected and well-respected man on the island, gave young George a ticket to see the play The London Merchant: or, the History of George Barnwell. Lawrence, 14 years George’s senior, did not receive a ticket.

The Tragedy of George Barnwell, as George referenced it, was written by George Lillo and first published in 1731. A cautionary tale, the play is aimed at young men – specifically apprentices – who may be led astray by life’s temptations. Small transgressions, Lillo illustrates, can lead to great tragedies. The protagonist, young apprentice George Barnwell, progresses from a break of curfew to the murder of a beloved uncle.

As the play opens, a scheming woman looking to extract money from an unsuspecting gentleman encounters Barnwell and perceives an easy target. The woman, Millwood, quickly seduces Barnwell and leads him down a path of guilt and shame. Millwood then exploits the young man’s guilt to convince him to steal from his master and, in a final act of desperation, to murder his rich uncle. As his uncle nears death, Barnwell reveals himself and expresses remorse, receiving forgiveness for his act.

Throughout the play, Barnwell is filled with guilt as he struggles internally with what is right and what is wrong. The play concludes with Barnwell’s full confession and the forgiveness of those he has wronged. Although he is sentenced to death for his crimes, Barnwell dies at peace. Millwood, on the other hand, is discovered for her role in the affairs and refuses to admit to any misconduct. She is also sentenced to death, and dies full of fear and defiance.

Unfortunately, George Washington didn’t share his impressions of the play in his personal writings. As a young man, was this a lesson he would take to heart? Or was the performance just a brief entertainment in a trip full of new and exciting experiences? Either way, one cannot help but wonder: could this youthful 19-year-old enjoying the theatre imagine that one day, he would become “George Barnwell” — and that youths would look to his (fictional) lesson of wrongdoing for moral guidance?

Click here (https://archive.org/details/londonmerchantor00lill) to read The London Merchant: or, the History of George Barnwell.