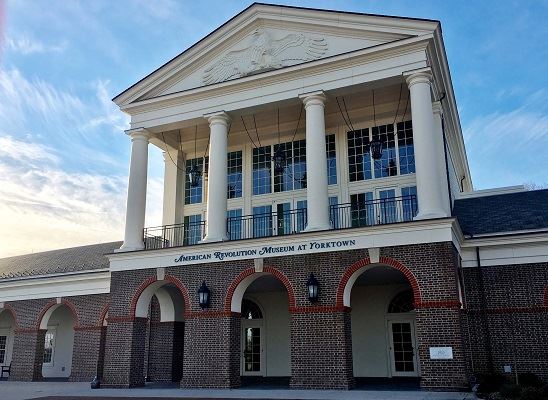 Last month, my family and I took a day trip to Virginia Beach. On the way home, we stopped by the American Revolution Museum at Yorktown. This visit to the museum (our first) was particularly special: we had the privilege of receiving a tour from Dr. Thomas E. Davidson, a senior curator, who retired from the museum at the end of July.

The American Revolution Museum at Yorktown, which opened in the spring of 2017, replaced the Yorktown Victory Center, built in 1976. While the Victory Center limited its subject matter to the Yorktown siege and surrender, the new 80,000-square-foot museum building, located next to the Yorktown Battlefield, expands its focus on the entire Revolutionary War and how the war (as well as its buildup and aftermath) affected diverse populations on both national and global scales.

In order to house a substantial increase in its collections, the museum includes a 22,000-square-foot permanent exhibition space, which is 25 percent larger than its previous space. This new space is divided into five themed galleries: the British Empire and America, the changing relationship between Britain and North America, the Revolution, the new nation, and the American people. Period artifacts, immersive environments (such as a recreated wharf), dioramas (including the little-known 1775 Battle of Great Bridge in Virginia) and short films help tell each theme’s narrative.

When I visited the old Yorktown Victory Center several years ago, I saw the tent used by George Washington during the war. Dr. Davidson explained that the tent now lives at the Museum of the American Revolution in Philadelphia because the curators there are better equipped to take care of it. However, the museum has obtained other very impressive artifacts, totaling 1,300 in all, including:

My favorite artifact from the collection was a pair of stays worn by an infant girl.1 My two-year-old daughter refuses to wear socks, so I can’t imagine her agreeing to wear stays!

The museum also makes optimum use of interactive exhibits, such as touch screens. In one of the galleries, Dr. Davidson showed us a touch screen that included a video of a Martha Washington re-enactor describing her life during the Revolutionary War. Using the touch screen, visitors can also view the only letter written by Martha to George known to have survived. In the letter, which is actually a note at the bottom of another letter, Martha referred to her absent husband as “My Dearest” and wrote, “I am sorry you will not be at home soon as I expe<ct>ed you.”2

Probably the most incredible experience at the museum is a 4-D film, in which visitors can seemingly experience the siege of Yorktown. In addition to scenes being re-enacted on a panoramic screen, simulated fog creeps into the theater, wind blows through your hair, lights flash, and your seat rumbles as the battle wages on around you.

Directly outside the building is a recreated Continental Army encampment, which includes tents for soldiers and officers, a drill field, and an artillery demonstration area, complete with costumed historial interpreters. Past the encampment lies a Revolutionary War-era farm, with a farm house, kitchen, tobacco barn, and quarters for the enslaved community. On the day we visited, female interpreters were feeding chickens and ducks in the yard.

An introductory film and education center, as well as a gift shop, cafe, and space for temporary exhibits, round out the museum experience. Even the parking area is worth exploring: 13 state flags fly high, representing each of the colonies, and a George Washington statue sits on a bench, waiting to greet you and to wish you farewell.

A special thank you to Dr. Thomas E. Davidson, retired senior curator at the American Revolution Museum at Yorktown. For more information on the museum, please visit https://www.historyisfun.org/yorktown-victory-center/.