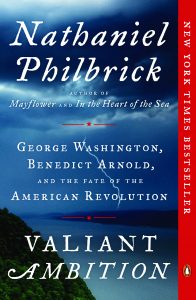 According to Philbrick, Connecticut’s Arnold and Virginia’s Washington were highly ambitious men whose childhood experiences left them with chips on their shoulders. They coveted not just respect but renown, which they acquired by risking their lives in battle. But Philbrick also claims that Arnold was the superior military commander, contrasting Arnold’s supposedly decisive role in such Patriot successes as Valcour Bay and Saratoga to Washington’s loss of New York City in 1776 and Philadelphia in 1777. And Philbrick even suggests that Washington may well have ended up like Arnold if he had been robbed of credit for his victories as happened to Arnold after Saratoga. While Arnold (being his “usual daredevil self”) was crippled by two shots to his left leg in that 1777 battle, he was eclipsed by Horatio Gates.1 Consequently, Gates replaced Arnold as the favorite of a New England-based Continental Congress faction that distrusted landed Patriot grandees like Philip Schuyler, Henry Laurens, and Washington himself.

Philbrick claims Arnold actually aspired to join the landed gentry but felt—largely without cause—that he had been snubbed by wealthy Patriot landholders who had long since embraced Washington. While at newly liberated Philadelphia in 1778, moreover, Arnold came to be embraced by British-friendly merchant families as the city’s lenient military governor. Young Margaret Shippen, who belonged to one such family, had befriended the British adjutant general John André before the Patriots reclaimed the city. But she married Arnold in 1779, expecting him to meet her considerable expenses. As a result, Arnold’s erstwhile congressional supporters subjected him to a “merciless witch hunt” by accusing him of mostly false corruption charges.2 Washington was forced in 1780 to reprimand Arnold, who had faced a court martial even while British officers were praising him as the most formidable Patriot commander.3 And so Arnold resolved to collude with André in order to betray his new command of West Point to the British, whom he now regarded as his sole hope for wealth and military fame.

Philbrick paints a fascinating and even rather sympathetic portrait of Arnold’s “self-serving derring-do,” which might have enabled Arnold to “become one of the immortal heroes of the Revolution” had he been able to have, like Washington, “applied his talents to a pursuit that while fulfilling his desire to serve his country also lined his pockets . . . .”4 Yet while Philbrick allows that Washington mastered his emotions and developed a sense of grand strategy to a greater degree than Arnold during the war, he goes too far in depicting Arnold as an impressive general.  Philbrick therefore concludes that “Washington was not a good battlefield thinker” and consistently “out-generaled,” intimating that he was not among the “few officers in either the American or British army who possessed [Arnold’s] talent for almost instantly assessing the strengths and weaknesses of the enemy.”5  And Philbrick lauds Arnold’s costly Valcour Bay exploits in October 1776, for “while Washington’s army to the south continued to suffer setback after setback, Arnold had shown that it was possible to stand up and fight.”6

Philbrick, however, ends his comparison of Arnold and Washington right before the former entered British service in October 1780 to fight the Patriots in Virginia. And by February 1781, as General Nathanael Greene learned, Arnold had put himself in a position to be captured because Washington had sent troops under “the Marquis De la Fayette and made a proposal for a cooperation in Chesapeak Bay against Arnold, with the whole of the French fleet and a part of their land force.”7 Lafayette informed Washington on March 25 that he had “Directed that Arnold Be Circumscribed Within His works on Both Sides of the Dismal Swamp.” But he bemoaned a day later that “The Return of the British fleet with vessels that Must Be transports from New York is a Circumstance which destroys Every Prospect of an operation Against Arnold,” who would have been doomed if the French navy had managed to complete Washington’s projected encirclement.8

One can perhaps see, then, why Americans at the time had considerably less respect for Arnold’s character and competence than Philbrick has. As Benjamin Franklin wrote Lafayette from Paris in May 1781:

Your Friends have heard of your being gone against the Traitor Arnold, and are anxious to hear of your Success, and that you have brought him to Justice. Enclos’d is a Copy of a Letter from his Agent in England, by which the Price of his Treason may be nearly guess’d at. Judas sold only one Man, Arnold three Millions; Judas got for his one Man 30 Pieces of Silver, Arnold not a halfpenny a Head. A miserable Bargainer: Especially when one considers the Quantity of Infamy he has acquir’d to himself, & entail’d on his Family.9