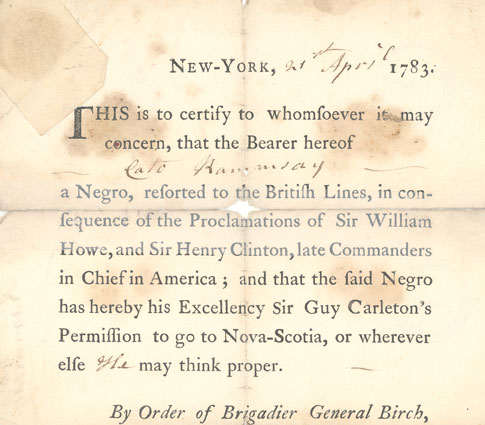 In my opinion, one of the most interesting stories that began in an earlier volume of the Papers of George Washington is the career of Samuel Birch, a British officer who first appears in volume 20 of the Revolutionary War Series. Patriot spy Abraham Woodhull (alias Samuel Culper) wrote Maj. Benjamin Tallmadge an intelligence report from Setauket, N.Y., on Feb. 26, 1779, listing “The 17 Regm. Drago[o]ns Coll Burch” among the British regiments stationed on Long Island.1 Gen. George Washington received that report, and his guards would narrowly avoid battling Birch’s dragoons a year later when the British attempted an abortive operation to apprehend Washington.2 Birch’s effort to capture Washington was certainly one of the more colorful episodes of the Revolutionary War, but I am also interested in Birch because his career vividly illustrates the many ironies of that complicated conflict.

Lieutenant Colonel Birch of the 17th Light Dragoons had been a British officer since 1772. Timothy Newell, a Boston selectman, wrote in his diary on Oct. 27, 1775, that in British-controlled Boston, “The spacious Old South Meetinghouse [was] taken possession of by the Lighthorse 17th Regiment of Dragoons commanded by Lieut. Colo. Samuel Birch. The Pulpit, pews, and seats [were] all cut to pieces and carried off in the most savage manner as can be expressed and destined for a riding school.”3 In 1776, moreover, Birch’s dragoons razed the Long Island home of Francis Lewis, a signer of the Declaration of Independence and New York delegate to the Continental Congress.4 Lewis would note in an August 1779 letter to an unofficial United States diplomat in Europe, “I have been early a great sufferer by the British depredators having all my effects to the Amount of at least £12000 Sterling plundered by a party under the orders of a Lieut Col. Burch of the Light Dragoons.”5

His Excellency the Commander in Chief [Gen. Henry Clinton] has appointed LIEUTENANT COLONEL BIRCH, of the 17th Light Dragoons, COMMANDANT of New-York, with the Rank of Brigadier General.

Governing New York City in a somewhat draconian fashion, Birch warned various rule-breakers that they would be “prosecuted with the utmost Rigour,” pay “such Fine as may be adjudged,” or “put in confinement, and expelled the lines, as soon as an opportunity offers for that purpose.”7 Yet he also threatened other lawbreakers with the “forfeiture of Five Pounds for every offence, one half of which will be given to the informer, the other for the use of the alms house,” issuing regulations as well to punish price speculators who were operating “to the manifest injury of the inhabitants, particularly those in indigent circumstances.”8

Birch, moreover, freed and sheltered several thousand slaves in New York City who had fled Patriot masters, although he did not attempt to emancipate slaves owned by Loyalists.9 More than 1,500 of the freed slaves who sailed from New York City for Nova Scotia in 1783 established Birchtown, which was the largest settlement of free blacks in North America at the time.10

Should we regard Birch as a hero or villain? Washington’s verdict seems clear. He never corresponded with Birch but wrote Maj. Gen. William Heath on Aug. 22, 1782:

As this is the second instance in which Genl Birch has contravened my Intentions in granting Flaggs to come from the Enemys Lines by other Routes than that of Dobbs Ferry—you will be pleased to write to that Gentleman on the Subject, & inform him that if any other Flags are granted any other Way than that of the Established post of Dobbs Ferry, they will be positively detained as prisoners.11

Yet can we really answer the preceding question about Birch or, for that matter, anyone else who participated in the Revolutionary War? To me, at least, Birch’s career illustrates the complex, ironic, and messy nature of the American Revolution and, indeed, of history as a whole.