Many new transcribers will write down exactly what they see, especially when they are unsure of what the word should read. However, no matter how much a word might look like a string of nonsensical letters, the chances that an author chose to write gibberish in the middle of a sentence is close to nil. It is better, then, to rely at least a little bit on context to determine what the writer meant to convey.

But it’s also possible to go too far in interpreting an author’s spelling or meaning. “Correcting” an 18th-century writer’s grammar or spelling can take away valuable historical context. Take, for example, this fragment of George Washington’s Barbados diary:

In the center paragraph of the notebook, Washington wrote that the crew had “catched a Dolphin.” I wouldn’t want to correct his grammar here, as it shows the way Washington wrote, and likely spoke, when he was 19 years old. Let’s look as well at the two times he spelled the word “dolphin.” The first time, Washington clearly wrote “Dolphin”; but in the second instance, it looks like he wrote “Dalpin.” There’s not a lot of difference between a script “o” and “a,” and Washington clearly spelled the word correctly once. Should I correct the spelling in the second instance? I believe on this point editors would disagree on what to do. If this were the only time Washington used an “a” in place of an “o” for the word dolphin, I would correct it, figuring that the “o” looked like an “a” due to sloppy penmanship. However, since he repeatedly wrote “Dalpin” or “Dalphin” elsewhere in the journal, we chose to keep the letter as “a.” I believe showing that young Washington misspelled words, even words he had spelled correctly earlier in the paragraph, carries historical meaning.

I write the above to give readers who do not have a background in transcription a glimpse into some of the issues that transcribers face. In some cases, the handwriting is so bad that you really do need to rely on context for what the author meant to say, even if what you’re looking at on the page is pretty much just a squiggle. Eventually, if you become familiar enough with a person’s handwriting, you can decipher most squiggles.

But what do you do when a person is writing a name? It’s tough to figure out a name from a letter’s context. And you can’t always trust that the person writing the name knows how to correctly spell it—as anyone reading Alexander Hamilton’s and George Washington’s multiple attempts to spell “Kosciuszko” can tell you.

In some cases, you have to go to other sources to figure out names. Ship captains, merchants, doctors—many of these people left paper trails in other places that can help you figure things out.

This brings me to the point of my post. I am currently working on the papers of Supreme Court Justice Bushrod Washington. Though his handwriting has its quirks, it is quite legible, which is good, because his legal writing includes a lot of names and numbers.

In his letters, Bushrod Washington frequently divulged his line of thought regarding a case, and to clarify his position he often included a legal citation. Legal citations, I have learned, are recorded differently from historical citations. Lawyers give the name of the case followed by the volume number, an abbreviation of the name of the person who put together the report, and then the page number. It looks like this:

I appreciate the simplicity of this citation system, and I imagine it was quite convenient for a Supreme Court justice who presumably had all of these books in his office to reference. I am, however, neither a legal scholar nor a lawyer trained in the late 1700s, so many of the names  that Washington cites haphazardly are not as obvious to me as they would be to his legal colleagues. Fortunately, I have the assistance of the internet and the University of Virginia Law Library at my disposal.

I thought it might be interesting to walk you through my process for transcribing and annotating these cases.

Let’s look at the first name underlined in figure 2. I read the first few words as “Lacy vs Reynolds,” but I struggle with the words that follow. Are they “Cro. El.” or “Gro. Et.” or “EC”? I’m not entirely sure from reading the handwriting alone. Also, Washington left out the volume number, apparently not finding it necessary. (Or maybe there is only one volume!) I won’t be able to confirm any of these items until I look up the case.

Instead of swiveling in my chair to grab a volume like Joseph Story (the recipient of this letter) might have, I pop on over to HeinOnline, an incredible resource of legal volumes that are organized into different databases. At this point, I’ve figured out from context that Bushrod isn’t citing American cases, but rather English cases, so I choose HeinOnline’s database for “English Reports, Full Reprint, 1220-1867.” 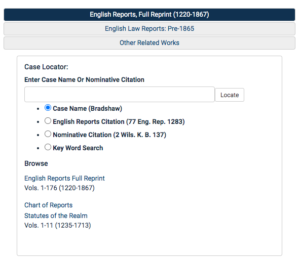 Here, I can search by the case name, English reports citation, nominative citation, or key words. Washington doesn’t cite “English reports,” as the reprint for that text was not completed when this letter was written, so I can search either the nominative citation or the case name. I clearly see “Lacy vs Reynolds” in the manuscript, so I type that into the search box and search by case name. 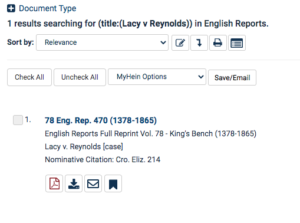 It immediately provides me with a link to “78 Eng. Rep. 470 (1378-1865),” where I can see the nominative citation is “Cro. Eliz. 214.” GOT IT! It seems that Bushrod Washington was referring to this case, abbreviating the nominative citation of  “Cro. Eliz.” (which refers to Croke, Elizabeth) to “Cro. El.” By double-checking, I’ve made sure that I have the correct case name and citation. If I went only by my eyes and my gut, I’d miss quite a few of these references, making my transcription unusable to future readers.

Of course, not all of Bushrod Washington’s legal citations are as cut-and-dried as that. Sometimes his references are wrong. Take, for example, the second underlined citation in figure 2.

I initially transcribed that as “King vs Nowell.” In fact, I was so confident in that reading that I put it into HeinOnline’s search by case name function. I got nothing. After trying a few different options—searching just “King” gave me too many cases to easily sort through, and trying “Nowell” or “Norvell” didn’t work—I decided to search by the citation. In this case, “1 T. rep. 118” or, as HeinOnline abbreviates it, “1 T.R. 118.” The answer popped up immediately: “Kirk v. Nowill.”

No matter how much I squint at that manuscript, I don’t see “Kirk”; Bushrod must have written “King” in error. This means that I’ll keep Bushrod’s citation of “King,” but I’ll add a footnote pointing the reader to the case that he intended to reference.