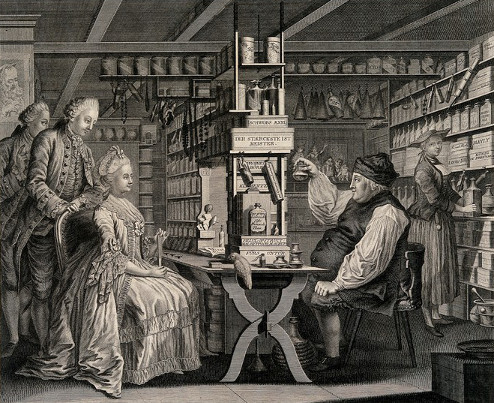 Martha Custis’ home was a sickly one in the summer of 1757. Dr. James Carter visited the family regularly. On June 12, he ordered a purgative of rhubarb for “Master Johnny,” Martha’s three-year-old son, John “Jacky” Parke Custis. Two days of steady care did nothing to help her husband, Daniel, who was also ailing. He died suddenly on July 8, aged 45. Only two weeks a widow, Martha had to call the doctor yet again on July 20: Jacky was ill once more. On Aug. 1, an enslaved woman belonging to the household was prescribed a “Cordial Astringent,” and for three days in mid-September, Dr. Carter waited on Martha herself. Remedies during these months included hartshorn, diascordium, syrup of poppies, chamomile, ipecacuanha, and tamarind.

If it were not for Martha’s handwritten statement of the above medical costs (on a sheet of paper in the Custis Family Papers at the Virginia Museum of History and Culture, formerly the Virginia Historical Society), we would know little about the state of her household leading up to and immediately following her first husband’s death.1 Financial papers—that general term for documents such as bills and pay orders, receipts and receipted bills, invoices and inventories, statements of account, bills of lading and exchange, accounts of sales, memoranda, and estate settlement papers—are rich with detailed information. Almost one-third of the 600 Martha Washington documents that The Washington Family Papers project has assembled since its inception in 2015 are financial in nature, whether authored by, addressed to, or written about her. As the project prepares to submit its manuscript of The Papers of Martha Washington to the University of Virginia Press this summer, we take a moment to consider this important set of documents.

It should be noted at the outset that, owing to the sheer number and often complex formatting of Martha’s financial papers, the project determined early on not to publish them all in the letterpress edition but to await their publication in the Washington Papers’ digital edition. A significant sampling of these documents, however, will be published in full in the volume, most notably an early invoice by Mrs. Custis, an account of Lady Washington’s travel expenses during the Revolutionary War, and the inventory of Mount Vernon following the Widow Washington’s death.2 In the interim, the project offers a calendar that lists Martha’s 187 financial documents and gives detailed summaries of those not published in the volume. All names and subjects from the calendar will be fully indexed.

A great percentage—42 percent—of Martha’s financial papers predates her marriage to George Washington, which took place on Jan. 6, 1759. These documents provide a number of insights into her early life as a wealthy plantation mistress. Martha and her husband Daniel Parke Custis participated in the complex trading networks between Great Britain and colonial Virginia, exporting large amounts of tobacco for all manner of goods imported from London, Liverpool, and Glasgow. Daniel’s “Invoice-Book & A Memorandum of Sundry drafts of Merch[an]ts of Great Britain” for this period notes some early expenditures for his wife, including “one p[ai]r of neat stone sleave Buttons set in Gold” and “a Velvet Hat for Mrs Custis.”3 She would be a lady of fashion, as a 1753 bill from Robert Cary & Company attests: “A p[ai]r [of] Silver Shoe Buckles for a Lady,” “A Chasd Gold Lady’s Watch Chain,” and “An Egg Trinket & a heart D[itt]o” were to grace her form. A silver coffee pot and sauce boats, engraved with coats of arms, would adorn the dining table.4 Even their correspondence would reflect the couple’s wealth: in 1754, Daniel ordered a ream of “dutch Arms cutt, ” “1/4 lb. best wafers,” and “3 Papers Inkpow[de]r” from Mount & Page in London.5

The Widow Custis inherited her husband’s business responsibilities, and she faced them determinedly. She soon took over the correspondence with Daniel’s tobacco agents.6 Many bills and receipts also show Martha supplying her household in his absence. She settled her husband’s debts, including his bill to Capt. Richard Chamberlayne for “Sawing 2000 foot of 2 1/4 Inch Plank” and “finding Timber”; the balance, outstanding since 1751, was paid on Nov. 2, 1757, by “Mrs Martha Custis.”7 Three days later, she paid £5 3s. to have William Poindexter inspect and price her tobacco.8 That December, James Gildart sent Martha from Liverpool myriad fabric and clothing supplies, carpentry tools, sugar, clover seed, grain, salt, brandy, and gunpowder for over £150.9 She had a plantation to run, and four-year-old Jacky and her two-year-old daughter, Martha “Patsy” Parke Custis, were growing. On Jan. 17, 1758, Martha’s London agent paid for “4 p[air] girls fine white thread hose,” “4 p[air] Boys d[itt]o,” and “6 p[air] wom[en]s 4d Supr fine Cotton” from Nathaniel Woodrooffe, a hosier in Cheapside.10 She purchased “2 spinning wheals” from John Hazelgrove in July 1758.11

The settlement of the Custis estate was a task that would fall largely upon the shoulders of Martha’s second husband, George Washington. From 1759 to 1761, financial accounts for Martha’s, Jacky’s, and Patsy’s shares of the estate were carefully prepared and outlined; as noted in the calendar, these documents can be found, with contextual annotation, in The Papers of George Washington.12 During this period, the record of Martha’s financial papers significantly dwindles, resuming in 1772 with a receipt to George from Charles Willson Peale “for drawing Mrs. Washington’s Picture in Miniature for the use of Mr. [Jacky] Custis, and at his desire.”13

Though George did not accept payment for his service as commander in chief of the Continental army during the Revolutionary War, he did request reimbursement for travel and other expenses.14 As Martha traveled to all eight of her husband’s winter encampments, the paper trail of her movements picks up in 1776 with “Sundry Bills p[ai]d by Mrs Washington at Philadelphia,” including her expenditures “when I was in New York.”15 Maj. Caleb Gibbs’s account in February 1780 lists the costs of “a Journey to meet Mrs Washington” at Philadelphia that January and “to Bring [her] Chariot with 2 servants & 4 horses” back to Morristown, New Jersey.16 Most significant is a July 1, 1783, account, in George’s hand, of his wife’s “Expences from Virginia to my Winter Quarters & back again to Virginia,” which documents her travel costs from December 1775 to Cambridge, Mass., all the way to December 1782 to Newburgh, New York.17

George’s inauguration as president of the United States on April 30, 1789, initiated another series of financial papers involving his wife. On her way to join her husband at New York, the nation’s capital, Martha made the arduous journey starting at Georgetown and continuing through fifteen other towns and cities, escorted by Col. Gabriel Peterson Vanhorn. The total cost, about £50, included “Carriage of a Trunk from Phila[delphia] to New York & Stage Horses from D[itt]o.”18 While she was passing through Philadelphia, an elaborate meal was held in her honor at Gray’s Ferry and Gardens. Both menu and bill for over £26 survive, along with a partial guest list of Philadelphia notables in attendance, among them Benjamin Franklin’s grandson and son-in-law, William Temple Franklin and Richard Bache, respectively. In addition to the 12 named guests were “Capt[ain] Miles & 39 Gent[lema]n Troopers[,] four Continental Officers[,] Mrs Washington & 20 Ladies.” Numerous bottles of madeira, champagne, claret, porter, ale, and cider were ordered (along with “45 Bowls” of “Punch”), as well as 79 “Dinners.” The whole was paid by the state of Pennsylvania in 1791.19 From receipts for hair-curling irons to bills for mending lace, most of Martha’s financial documents from the presidency suggest that keeping up appearances was paramount.20

Finally, there is one last shift in Martha Washington’s financial papers: a great influx of bills and receipts documenting the aftermath of George’s death on Dec. 14, 1799. As with her first widowhood, her second demonstrates the financial responsibilities gained from the loss of a spouse. These documents from 1800 until Martha’s death in 1802 account for the next-largest percentage—26 percent—of her financial papers. The documents show that her concerns extended beyond the household to the management of the Mount Vernon plantation. On April 3, 1800, for instance, she received 600 barrels of corn from her nephew William Augustine Washington in payment of a $1,500 debt.21 In his bill to “Lady Washington” of May 21, Edward Martin charged Martha for parts and repairs to farm equipment, including a plow.22 Mount Vernon farm manager James Anderson, who had convinced the retired George Washington to go into whiskey-making, bought “Two Gross Corks for the use of Mrs Washington” on June 24.23 That fall and winter, weaver Lawrence McGinnis charged Anderson on Martha’s account for making over 200 yards of “Negro Cloth.”24 By 1801 Martha was concerned about collecting “my rents” and the “Interest due me on U.S. Stock.”25 Lastly, her daybook for 1802, apart from recording a deposit of $2,989.79 with the Bank of Alexandria on Feb. 9, lists transactions with a variety of individuals, including “Ceasar,” a weaver named “Magenis” (“Magines”), and the tailor William Jones.26

As with the estates of Daniel Parke Custis and George Washington, the estate of Martha Washington accumulated its own bills following the widow’s death on May 22, 1802, most of them paid out by her executor and grandson-in-law, Thomas Peter. Martha owed taxes on her property in Washington City.27 The process of drafting her will, which had been exacerbated by “many questions propounded by Mr [George Washington Parke] Custis,” her grandson, came at a cost.28 In the end—thanks to a receipt from 1804—we know that Martha’s mourners donned “19 3/4 Y[ar]ds bl[ac]k Crape,” black silk handkerchiefs, gloves, ribbon, and shoes supplied on May 24 and 25, 1802, by the Alexandria, Va., firm Bennett & Watts.29 As they do in the case of Martha Dandridge Custis Washington, financial papers transform the historian’s portrait from generic limning to flesh-and-blood likeness.

* Sense and Sensibility, a novel by Jane Austen (1775–1817), was published in 1811. Martha Washington’s nephew Bushrod Washington (1762–1829) ordered “the whole of Miss Austens Novels” for his wife, Julia Ann “Nancy” Blackburn Washington (1768–1829), just months before their deaths (Bushrod Washington to R. H. Small, April 8, 1829, Haverford College). The pun is used in the title of Gary Saul Morson and Morton Schapiro’s Cents and Sensibility: What Economics Can Learn from the Humanities (Princeton, N.J., 2017).