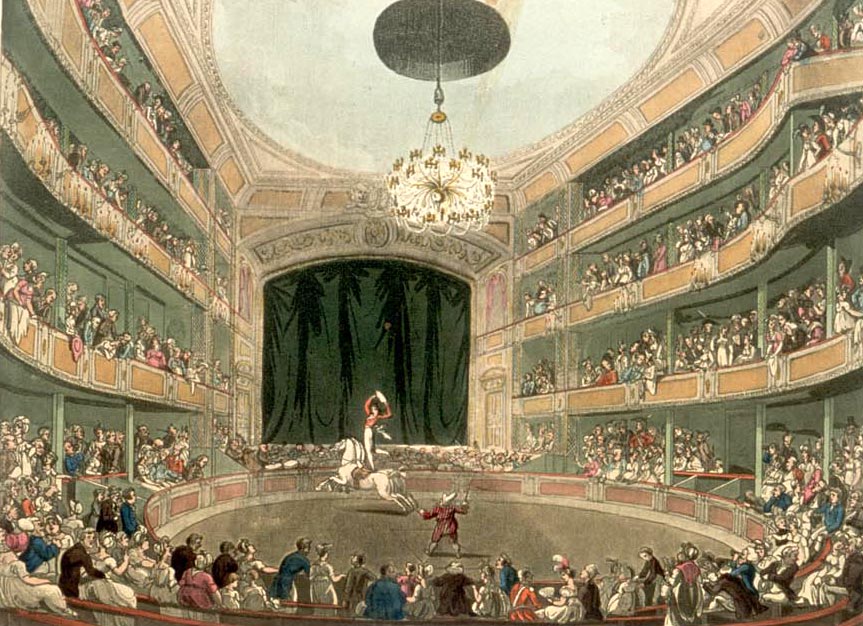 On Wednesday, April 24, 1793, George and Martha Washington responded to an invitation from Samuel and Elizabeth Powel. Their letter read, “Mrs Washington is so much indisposed with a cold as to make her fear encreasing it by going to the Circus this afternoon. The President & rest of the family propose to be Spectators at the exhibition of Mr Rickets.” The family members who presumably did attend were Martha’s grandchildren, Nelly and Wash, who were living at the presidential house at the time. The grandchildren living with their mother, Eliza and Patsy, could possibly have attended as well. Martha’s indisposition, however, came at an unfortunate time, as it prevented her from attending a key moment in American entertainment history—the introduction of the modern circus.

Philip Astley created the concept of the modern circus in England in 1768. A skilled horseman, Astley learned to ride standing on a horse’s back. He discovered that riding in a circle helped him balance during the trick, and thus he has been credited with inventing the first circus ring. By 1770 Astley had built an amphitheater and added a clown, musicians, and additional entertainers to his show.

Twenty-five years later, John Bill Ricketts, a Scottish horseman, introduced Americans to Europe’s new form of entertainment. His exhibitions were held in Philadelphia and New York. Though Ricketts offered a clown, tumblers, and other acts familiar to the twenty-first century reader, his horsemanship was the true highlight of the show. The March 27, 1793, issue of the Federal Gazette and Philadelphia Daily Advertiser invited readers to experience Ricketts’s “unparalleled EQUESTRIAN PERFORMANCE.” Ricketts’s first circus was reviewed in Philadelphia’s Dunlap’s American Daily Advertiser on April 4. The reviewer exclaimed that the “upwards of seven hundred Spectators” were treated to a performance “beyond expectation, beautiful, graceful and superb, in the highest extreme.”

George Washington‘s attendance at the circus did not go unnoticed. The April 24 issue of the Dunlap’s American Daily Advertiser informed readers that, “This Afternoon, The President of the United States and Family will honor the Circus with their Company.” Although it seems that she missed this one, Martha Washington may have had a second chance to witness the first American circus two months later. The July 16 issue of Philadelphia’s General Advertiser noted that at a benefit for the poor thrown by Ricketts, “The President of the United States and his family were among the company who visited the circus.” In his financial papers, George recorded on May 24, 1797, that he had paid 2 shillings, 3 pence for “Circus exp[ence]s going to George Town.”1

Did George and Martha Washington enjoy this new form of entertainment imported from Europe? Although no specific comments from either has been found, an advertisement in the January 23, 1797, issue of the Gazette of the United States, & Philadelphia Daily Advertiser stated that Ricketts offered a performance “BY DESIRE OF THE PRESIDENT OF THE UNITED STATES,” suggesting that George Washington, at least, was indeed amused.