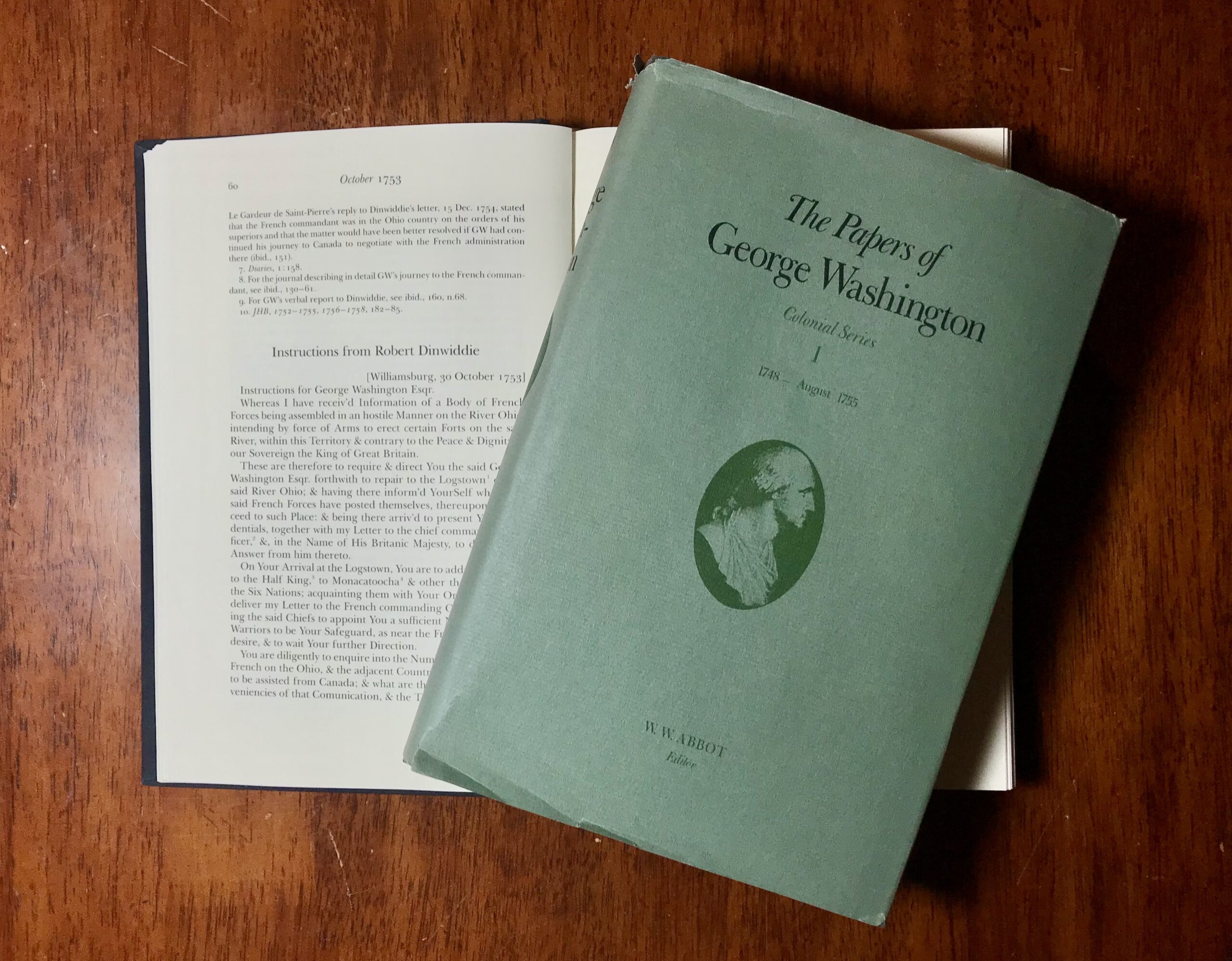 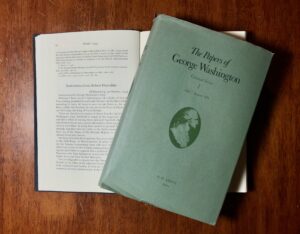 Documents in the first volume of the Colonial Series tell a coming-of-age story that showcase George Washington’s rapid transformation from 1748 to 1755. GW began his career working as a professional surveyor on the frontier, then the fringe of his society, but in less than five years became one of Virginia’s most distinguished soldiers. What started as quiet adolescence in the country with a comfortable occupation turned into the tale of a young man confronting the dangers of a military career while caught in the middle of a burgeoning conflict and political intrigues.

From 1749 to 1751, GW conducted land surveys in Virginia’s Northern Neck Proprietary owned by Lord Thomas Fairfax, who took a liking to the young man, along with other members of the prominent Fairfax family. GW’s first known land survey dates to 22 July 1749. The 17-year-old surveyed 400 acres for Richard Barnes on Flat Run in Culpeper County. He worked primarily in good weather during the spring and fall.

Romance also was on GW’s mind. In a letter to a friend known only as Robin in 1749–1750, he recalls a mysterious old flame described as the “Low Land Beauty.” Poetry that GW may have written in 1749 and 1750 suggest a hopeless romantic. If GW composed these poems, they reveal an emotional young man at the cusp of adulthood willing to surrender himself “to cupids feather’d Dart.”

In 1752, GW’s gallivanting youth ended abruptly with the death of his half-brother Lawrence, who had fought in South America with the British army and had served as Virginia’s adjutant general since 1743. GW looked up to Lawrence and wanted to follow in his late brother’s footsteps. GW wrote Virginia lieutenant governor Robert Dinwiddie on 10 June 1752 seeking appointment to the vacancy. Dinwiddie had succeeded Sir William Gooch as the lieutenant governor of Virginia in 1751 and knew both Lawrence and GW. On 30 Oct. 1753, more than one year after the initial request, Dinwiddie officially appointed GW with “especial Trust & Confidence” as Virginia’s adjutant general for the southern district. Dinwiddie effectively launched GW’s military career with the stroke of a pen.

Soon after, Dinwiddie sent GW to deliver a message to French forces encroaching on land Virginians claimed along the Ohio River and to gather intelligence on French activity. The young man returned from the harrowing journey in early 1754 and reported concerted French efforts to occupy the territory. Completing his mission with distinction allowed GW to hope for a higher commission despite doubts about his “youth and inexperience” expressed in a letter to Richard Corbin, a successful planter who became influential in Virginia politics. Commissioned lieutenant colonel of the new Virginia Regiment, GW responded to Dinwiddie on 20 March 1754 that he intended to fulfill the duties of “the Profession I have now enter’d into.” Long gone were the days when surveying land filled his hours. GW would continue to perform surveys throughout his life, many of them at Mount Vernon, which he leased from Lawrence Washington’s widow until her remarriage and the death of her daughter enabled GW to inherit the property overlooking the Potomac River.

Family and home matters were secondary while GW led the Virginia Regiment toward the French force in what is now western Pennsylvania. Uncertainty and tension preceded what amounted to an ambush of a French party, with GW leading the colonial militia and warriors under Tanacharison, a Seneca chief referred to as the Half-King. He reported to Dinwiddie on 29 May that the engagement lasted less than fifteen minutes and resulted in British victory as well as the death of the French party’s leader, Monsieur de Jumonville. Three days after the battle, GW wrote to his younger brother John Augustine how he expected “every Hour to be attacked by superior Force” given rumors of an incoming French regiment wanting retribution. Fear reigned in GW’s camp, but the French never came. Soon, congratulations trickled in from friends like Charles Carter, who wrote on 5 June that Washington deserved to be “crownd with Laurels” upon his return home.

GW’s decision to attack brought significant consequences. Killing Jumonville and his companions on what the French claimed was a diplomatic mission triggered the French and Indian War, the North American theater of what became the Seven Years’ War. Suddenly, the peripheries of the British empire became center stage for a conflict of global proportions.

Following the initial clash, Washington concerned himself with the well-being of his soldiers. He established Fort Necessity and asked favors from important political figures like Alexandria merchant John Carlyle to help cover the salaries of his troops. Years later, this experience served GW well when he had to plead constantly for funds to pay his army during the American Revolution.

GW’s fortunes reversed quickly on 3 July when he agreed to abandon Fort Necessity after being surrounded and pinned down by a superior force. Led by Louis Coulon de Villiers, Jumonville’s brother, the French and their Native American allies attacked the poorly sited fort and fulfilled springtime rumors of a powerful response to British intervention. GW signed articles of capitulation but qualified the loss as the result of an “unequal Fight” when he gave an account published in the Virginia Gazette (Williamsburg) for 19 July 1754. Much to his dismay, GW later discovered that he signed without knowing all the terms, which included an embarrassing, and troubling, admission. The capitulation agreement was in French, which GW did not read or speak, and he was at the mercy of an unreliable translator. By signing, he admitted to being among the assassins of Jumonville. GW apparently learned a hard lesson from this mistake. When he dealt with the French again during the American Revolution, members of his innermost circle served as his translators.

Despite losing Fort Necessity, GW’s military career did not come to an end. The speaker of the House of Burgesses, John Robinson, sent a letter on 15 Sept. 1754 assuring GW that “the House of Burgesses have taken particular Notice of the Bravery of Yourself, and the rest of the Officers and Soldiers under your command, in the gallant Defense of your Country, and have ordered me to return you their Thanks.” Such recognition did not compensate for the disappointment GW felt when Dinwiddie broke up the Virginia Regiment into ten companies with a captain being the highest ranking officer in each company. Rather than accept a demotion, he resigned.

Still eager for military honor and career advancement, GW maneuvered his way onto another career-defining expedition as a volunteer aide to British general Edward Braddock, who had been assigned to lead a massive British attempt to capture Fort Duquesne at what is now Pittsburgh. This campaign took place during the spring and summer of 1755. GW wrote to his mother Mary Ball Washington on 6 May to report that “nothing yet worth relating” had happened. That changed as Braddock’s command laboriously constructed a road through the woods and across the mountains. This volume contains correspondence from GW’s heavily edited letterbook of the ill-fated Braddock Campaign. These letters contain both GW’s original script as well as edits that he made later in life, apparently to present more polished prose. The experience with Braddock was far from easy. By late June GW confided to his brother John Augustine how he suffered from violent “Fevers & P[ai]ns” in his head that prevented him from riding a horse and clearly affected his ability to write. Soon after GW wrote this letter, the French and their Native American allies struck again with ferocious and fatal precision.

GW described to his mother on 18 July 1755 the terrible ambush the British had suffered nine days before at the hands of an enemy who had shadowed the movements of Braddock’s column. Still suffering from illness and one of the few officers not killed or wounded, GW did all that he could to stabilize the chaotic battlefield situation and then organized the retreat of what was left of the shattered and demoralized English army. It is hard to know how Mary Ball Washington responded to her son’s graphic account of the sudden attack and terrible losses when she read these words from him: “I luckily escaped with[ou]t a wound, tho’ I had four Bullets through my Coat, and two Horses shot under me.” GW’s account of the defeat draws a sharp distinction between the English soldiers from Great Britain and the soldiers from Virginia. He wrote to his mother that the English soldiers “behavd with more cowardice than it is possible to conceive” and eventually “they broke, and run as Sheep pursued by dogs.” In his report to Dinwiddie, also written on 18 July, GW praised the Virginia militia as having “behavd like Men, and died like Soldier’s.” By differentiating the contributions of English and Virginia soldiers, GW contended for the latter being treated as equal to the former rather than as inferiors, a recurring reality that he despised.

GW also observed in his report to Dinwiddie: “I Tremble at the consequences that this defeat may have upon our back setlers.” Responding to GW’s shocking account, Dinwiddie admitted the defeat of the English forces “by such a handful of Men gives me very great Concern” and expressed amazement that the ranking British officer had marched “to Winter Qrs in the Middle of Sumer,” leaving “the Frontiers of his Majesty’s Colonies open with[ou]t proper Fortificat[ion]s & exposd to the Invasions of the Enemy.” That, however, was the truth, and GW soon would be involved as the leader of Virginia troops trying to shield the frontier settlements from French encroachments.

GW would go on to participate extensively in the war he helped to ignite, but these first few years on the frontier served as the basis for the rest of his military career. With Dinwiddie’s support, GW transitioned from a professional surveyor to become one of Virginia’s most prominent soldiers. Through a mixture of triumphs and failures that marked these formative years, GW established a favorable reputation for himself among Virginia’s political elite and acquired military experiences that later proved invaluable assets as commander of the Continental army.