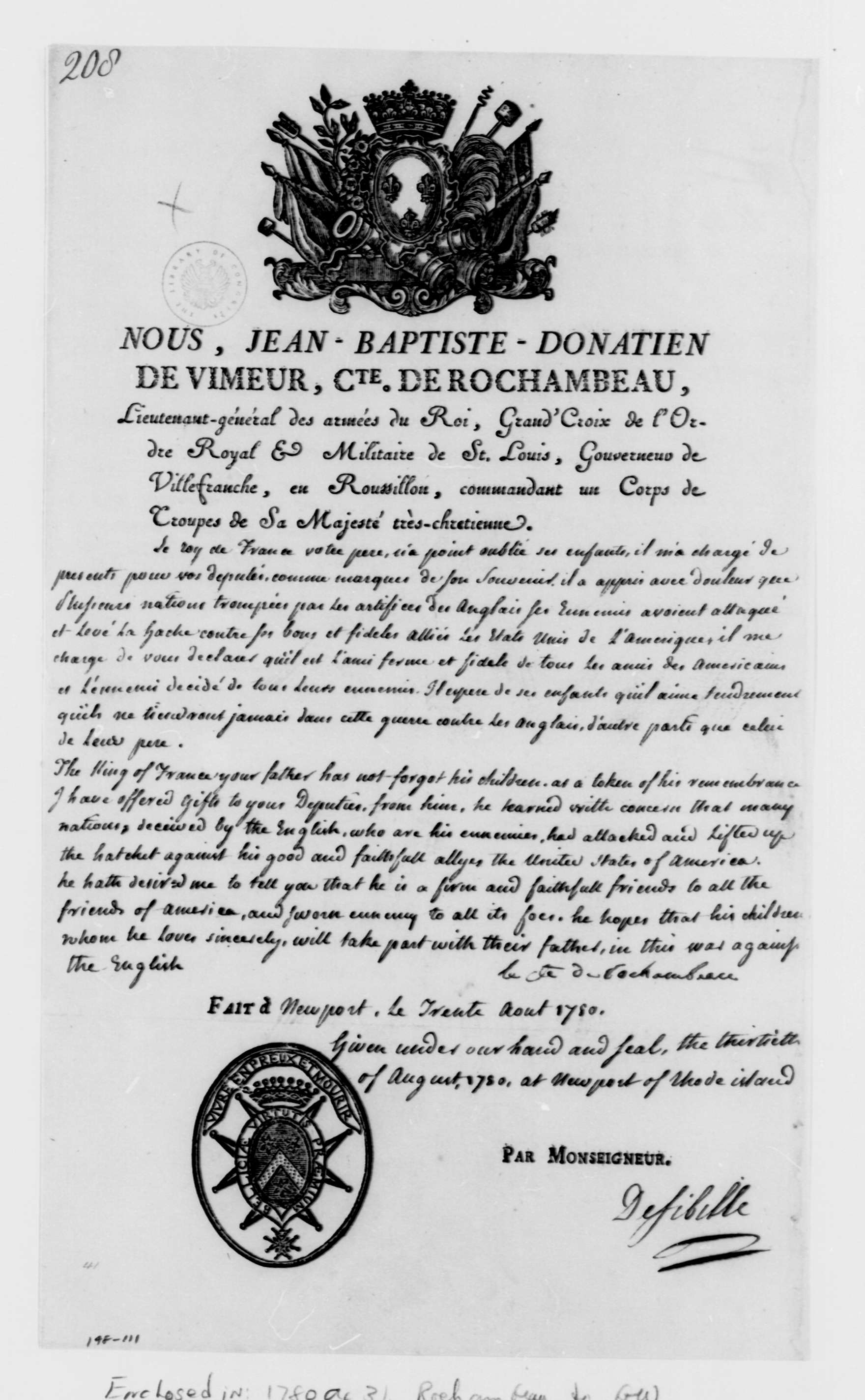 When annotating, editors at the Papers of George Washington often consult and cite personal documents, such as diaries, for additional details about the events and people described in Washington’s correspondence. These personal documents are especially useful as they commonly provide uninhibited evaluations of those events and people. Take the case of a delegation of Indians who visited the French commanders at Rhode Island in late August 1780 and Washington’s army in September of that same year.

Writing to Major General Lafayette from Albany on Aug. 18, 1780, New York congressional delegate Philip Schuyler noted that certain Oneidas had taken refuge at Fort Schuyler, N.Y., from other Indians, “whom the enemy [Great Britain] with great Industry have taught to believe that France was not In Alliance with us, and never Intended to afford us any Assistance.” Schuyler explained that James Deane, Indian agent for the northern department, would soon escort thirteen Oneidas and Tuscaroras as well as five Caughnawagas from that fort. The Indians were to visit the French forces at Rhode Island, where:

I most earnestly wish If the French Commanders should see cause to address them, that his Majestys [Louis XVI’s] Determination Effectually to Support the American cause thro the present Contest should be forcibly Impressed on them, nor would It be Improper to Observe that the King has learnt with Chagrin that the Indians who consider him as their Father have wantonly Insulted the Americans whom he regards as his brethern, that a Continuation of Hostilities on the part of the Indians cannot fail of drawing his resentment on them, and that he will certainly Chastize them unless they desist.1

Before Yesterday, I received a Deputation composed of 19. Indians of Different nations who have been Led here by Mr Deane, and who have been sent me by Mr Schuyler from Albany. his Letter was addressed to The Marquis de La Fayette, and to Me, in his Absence; that induced me to open it. I received them most heartily, I showed them yesterday the French Troops mixed with the American, I put some Regiments a manœuvring before them, with field pieces and firing. They were overjoyed at what they saw and heard. The huzzards [cavalry] of [Brigadier General] Lauzun have surprized them, in camp, as did likewise great Lobsters of which they Laughed very heartily at Table. They Drank the King of France, The United states, and the Indian nations, who are allied to Us. I have given them my answer, of which I send Your Excellency a copy and I desired them to send several Copys to those nations who have taken up the hatchet.2 I made them several Gifts and gave to the chiefs, some pieces representing the coronation of his Majesty. They will go to Day, on board the [French] fleet and I believe they will set off to morrow.3

On the 28th we received the visit of 19 savages, members of some Indian tribes that still remain attached to France after the loss of Canada. One cannot imagine the horrible and singular faces and bizarre manners of these people. Their complexion was brownish, almost bronze, and their hair was fastened in shining black braids and attached to the top of the head by a string or a bit of hide. Almost all of them had slashed their ears and the tendon of the nose. . . . Their complete attire consisted of some blankets, over a small loin cloth, part of which passed between the thighs and was decorated with some pearl shells or glass. . . . Their language, or rather their gibberish, had nothing in common with any known tongue. Everything I heard was pronounced like prattling, very indistinctly, in a monotonous and singing tone, with the last syllables heavily accented. Their battle-cry in war is very piercing and ear-splitting; it is almost like the sound of an exploding artillery shell when one is quite near by. They assured us that they always began with this when they assembled. They appeared to be very fond of dancing and made their own music, which began with a humming and increased to the accompaniment of gestures, grimaces, and contortions of the eyes, body, feet, etc., to a point in the end where it became very piercing and distasteful. . . . Two-thirds of these Indians were tall and well formed, very muscular in build, but nevertheless, very supple. All of them seemed to us to be very carnivorous, probably because at home they lived only on game and fish, but our French meat was very much to their taste.

Only two of their chiefs could make themselves understood, one in English and the other in French; but they took the precaution to bring with them a person named Frey [possibly Hendrick Frey, a major in British service], a German. . . and tailor by trade, who had lived among them since the year 1758, and who, since he had served with the English, had learned their language, which he spoke rather well. They seemed to like him very much. It is certain that if he had not been an old man, very grey, with long blond hair falling to his shoulders and with a lighter complexion, which distinguished him from the savages, one would not have recognized him as a European from his voice, because he knew their language so perfectly. He assured us that he would end his days among them.

M. de Rochambeau showed them the [French] army. He gave them some gold and silver medals with the head of Louis XVI. They were also presented with some blankets, knives, and other objects of hardware, which gave them much pleasure. They left us in return their sandals, belts, and many other trinkets, also some scalps.4

Washington noted when replying to Rochambeau on Sept. 3: “The visit you have had from the Indians, gives me great pleasure. I felicitate you on that which you must [have] had in the company of such agreeable and respectable guests. I dare say the reception they met with will have a good effect. It has been the policy of the English to discredit the accounts of an alliance between France and America; a conviction of which on the substantial evidence of your army and fleet, and not less of your presents and good cheer will not fail to have an happy influence.”5 Washington, though, might not have realized that the Indians were heading for his army in Bergen County, N.J., since Rochambeau had not mentioned where they would go after leaving Rhode Island in his letter to Washington dated 31 August.

Col. Israel Angell wrote in his diary entry for Sept. 12: “a Number of Savages of the Onido [Oneida] Nation Came to head Quarters this Day.”6 Washington’s general orders for the same date conclude: “The army will parade tomorrow morning eight ô clock by brigades on their respective brigade parades—The General wishes the line to be as full as possible—The new Guards will remain in the Line ’till the review is over—The Light corps will parade at ten ô clock.”7

The army was paraded to be reviewed by General Washington, accompanied by a number of Indian chiefs. His excellency, mounted on his noble bay charger, rode in front of the line of the army, and received the usual salute. Six Indian chiefs followed in his train, appearing as the most disgusting and contemptible of the human race; their faces painted of various colors, their hair twisted into bunches on the top of their heads, and dressed in a miserable Indian habit, some with a dirty blanket over the shoulders, and others almost naked. They were mounted on horses of the poorest kind, with undressed sheep skins, instead of saddles, and old ropes for bridles. These bipeds could not refrain from the indulgence of their appetites for rum on this occasion, and some of them fell from their horses on their return to headquarters. This tribe of Indians is friendly to America, and it is good policy to show them some attention, and give them an idea of the strength of our army.8