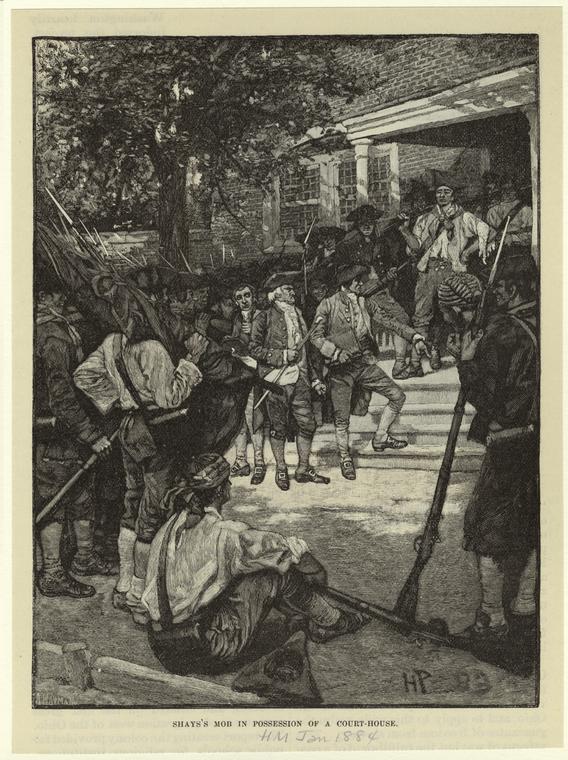 The weak and inefficient government under the Articles of Confederation tested George Washington’s renowned patience and restraint. As shown in the fourth volume of this series, the still young nation experienced a trying and uncertain time. Unfavorable attitudes toward the government in April 1786 became much harsher over the progressing months. A substantial contributor to the growing public unease was the prolonged rebellion in Massachusetts from August 1786 through February 1787.

Former captain Daniel Shays led an uprising of  farmers from western Massachusetts who were frustrated with the state government. The farmers were overwhelmed with debts and taxes and wanted to use paper money. In the hope of alleviating their poor economic situation, they persistently sought redress from the courts for economic relief. When their demands were not met, Shays began a six-month armed campaign across Massachusetts. The event became known as Shays’ Rebellion.

GW first heard about these insurrections when his former aide-de-camp and friend David Humphreys sent a letter on 24 Sept. that alluded to an unruly mob interfering with the county court. GW received a more detailed account dated 1 Oct. from another friend, Henry Lee, Jr., that explained how the insurgents had “taken possession of the town of Springfield, at which place the supreme court was sitting.” The militia, which was unable to suppress Shays’ men, retreated to the U.S. arsenal in that town. Responding to the news of such chaotic events, GW admitted, in his reply to Humphreys on 22 Oct., to being “really mortified beyond expression” that the conduct of the nation so quickly had turned unruly after the fight for independence. Washington understood that  the insurgents as well as any reaction to their behavior both posed a danger. “Precedents are dangerous things” GW noted when he wrote Lee on 31 October. GW recognized that the government had to be careful not set a tyrannical or improper example.

Former Continental army artillery commander and Bostonian Henry Knox spoke with the most ferocity. Knox’s updates  were sent periodically at first, but as the movement of the rebels became more determined in January 1787, his reports to GW went out weekly. Knox informed GW that their old friend Gen. Benjamin Lincoln had been appointed as the commanding officer to combat Shays’ forces. Knox, who then lived in New York, explained on 21 Jan. how the insurgents “wish nothing more than to meet the governmental forces in the field.” It was Knox’s understanding and fear that there would soon be a great fight between Lincoln’s militia and Shays’ army. In fact, while there were confrontations between the government’s troops and the rebels, the disputants within Massachusetts avoided full-scale war and significant loss of life.

Despite his frustrations with Shays’ Rebellion, Knox’s communications with GW more zealously criticized the inefficient and weak federal government. For Knox, the current unrest in Massachusetts arose because the federal government possessed too little power. He even suggested on 23 Oct. 1786 that the “government must be braced, changed, or altered to secure” the lives and property of lawful men. GW agreed that the current government was flawed, and even had expressed this belief months before Shays’ Rebellion. On 5 April, GW had written Lee “that there is more wickedness than ignorance in the conduct of the States,” and disparaged state governments for acting selfishly. GW’s observations highlighted the absolute lack of power over the thirteen states given the construct of the federal government under the Articles of Confederation. The belief that state governments would respond to congressional requests in good faith clearly had been proven wrong.

By the time he wrote prominent New York jurist and political figure John Jay on 18 May, GW had progressed from discontent with the federal system to observing outright “[t]hat it is necessary to revise, and amend the articles of Confederation.” Though GW hesitated to call for a general convention because he doubted its feasibility, his concerns regarding the government only intensified over the course of the summer. In writing Jay on 15 Aug., GW’s frustration with the “disunited States” led him to conclude that they “probably had too good an opinion of human nature in forming our confederation.” Exploring possible solutions in correspondence with fellow Virginian James Madison likely alleviated some of GW’s anxieties. Madison’s first letter on 1 Nov. merely covered current events, but GW’s response on 5 Nov. launched a vigorous consideration of problems involving Massachusetts and the federal government, with GW suggesting that the nation is “fast verging to anarchy & confusion!” Notably, GW then explained how “a liberal, and energetic Constitution” would restore the nation to a degree of respectability. GW, it seemed, now desired a convention to revise the current system of government and save the imperiled country.

As planning for a convention began, Madison informed GW on 7 Dec. that the former commander in chief’s name “could not be spared from the Deputation to the Meeting in May in Philada.” GW’s presence on the list of Virginia delegates, Madison explained, would be seen “as a mark of the earnestness of Virginia, and an invitation to the most select characters from every part of the Confederacy.” Madison was expressing what many thought: naming GW as a delegate to the federal convention would give legitimacy to its proceedings and ease the minds of Americans fearing the formation of a new tyrannical government. What Madison knew—and GW soon learned— Virginia governor Edmund Randolph already had written GW on 6 Dec. to communicate his “Unanimous appointment” by the Virginia legislature “to the Convention at Philadelphia.”

GW had serious reservations about his appointment to the federal convention. GW prized his honor. To him, the way people perceived his character was of the utmost importance, and to give them any reason to think badly of him would be terrifying. GW pondered every decision to be sure it reflected positively on his reputation. One of his greatest anxieties stemmed from the Society of the Cincinnati. Former Continental army officers had formed this society—and named GW as president—to  maintain friendly bonds and advocate for promised compensation. The society’s annual meeting was set for May 1787 at Philadelphia, which was the same time and place as the federal convention. This posed an issue for GW as he had resigned as the Society’s president and advised the members that he would not attend their gathering in May. To appear in Philadelphia for the convention would look awkward and could be taken as an insult. To relieve his distress, GW wrote Madison on 16 Dec. and Humphreys on 26 Dec. for guidance.

On 21 Dec., GW also wrote Governor Randolph to indicate that he would not accept the honor conferred on him and “that some other character, on whom greater reliance can be had, may be substituted in my place.” Randolph, along with almost the entire country, understood that there was no man who could substitute for GW. In his response on 4 Jan. 1787, Randolph conveyed how he delivered the disappointing news to the council, but that they collectively agreed to intreat GW not to decide on a refusal immediately. Their position placed a pressure on GW that he could not ignore as he continued to evaluate the personal and public implications of his participation in the federal convention.

During the eight months covered in this volume, GW spent almost all of his time at Mount Vernon. He sent only two letters from other places, the farthest being from Stafford Courthouse, Va., just thirty-one miles away. GW always enjoyed being at his sprawling plantation. His letters from Mount Vernon addressed household needs and accounts. Of particular note is his correspondence with John Francis Mercer to complete a business transaction, as it illustrates GW’s complicated position on slavery. Mercer, who was indebted to GW, wanted to settle his obligation with human property. While GW indicated on 6 Nov. 1786 that he had “great repugnance to encreasing [his] Slaves by purchase,” he advised Mercer that he is in need of six men, all of whom need to be “healthy, and none of them addicted to running away.” Writing again on 24 Nov., GW balked at Mercer’s proposal to separate families in order to meet the request. GW could not countenance a payment that “hurt the feelings of those unhappy people by a separation of man and wife, or of families.”

GW’s views on slavery remain perplexing. He expressed an earnest dislike for the institution but continued its practice at Mount Vernon and sustained its practice elsewhere. When writing his dear friend Lafayette on 10 May, GW articulated his wish that the people of America create a plan for emancipation. Incongruously, a month earlier, GW had written Philadelphia financier Robert Morris that it was wrong for Pennsylvania Quakers to assist an enslaved person’s escape into freedom. GW remained conflicted over slavery until his death.

GW kept in touch with friends, especially Lafayette, to whom he wrote four letters. A more personal side of GW appears in these missives. They include unguarded expressions of his daily woes. In his letter dated 8 June, he even joked to Lafayette about Virginia ham, and how “Virginia Ladies value themselves on the goodness of their bacon.” Sadly, GW also experienced multiple deaths. One of the greatest losses was Nathanael Greene, a trusted general and frequent confidante during the Revolutionary War. In a private letter to Thomas Jefferson on 1 Aug., GW somberly observed: “Thus some of the pillars of the revolution fall.” Although GW penned this thought about late friends, it also eerily reflects his feelings about the uncertain future of the fragile young union.