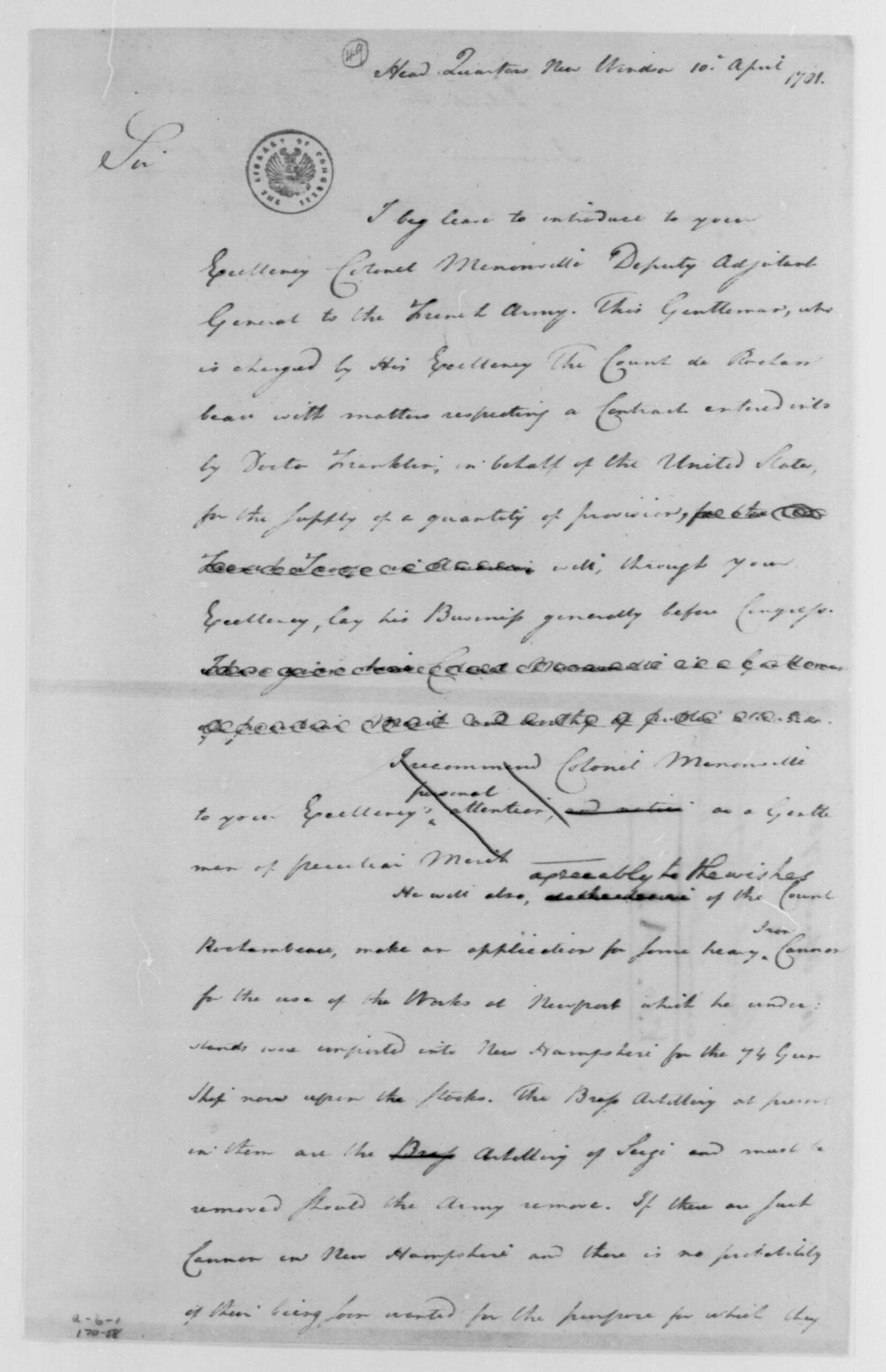 French lieutenant colonel François-Louis Thibaut, comte de Menonville, was an aide to French lieutenant general Rochambeau, who wrote Washington from Newport, R.I., on April 28, 1781, to announce that he would soon depart for Washington’s headquarters at New Windsor, New York.2 Washington recorded in his diary entry for May 6: “Colo. Menonville, one of the Adjutt. Generals in the French Army came to Head Quarters by order of Count de Rochambeau to make arrangements for supplying the Troops of His Most Christian Majesty with certain provisions contracted for by Doctr. Franklin. This demand, tho’ the immediate compliance with it, was not insisted upon, comports illy with our circumstances; & is exceedingly embarrassing.”3 (Benjamin Franklin, U.S. minister to France, had helped arrange a contract in 1780 whereby Congress would settle French loans by furnishing Rochambeau’s troops with provisions.)4

Washington proceeded to write Huntington from New Windsor on May 8:

To add to our present embarrassments, application has just been made to me by Colonel Menonville, who is sent forward by Count Rochambeau, to know in what manner it will be most convenient to us to make payment for a very large quantity of provisions, with which, Doctor Franklin, in behalf of the United States, has contracted to supply the French Army. Colonel Menonvilles instructions have reference to Resolves of Congress and letters which have passed between your Excellency and Count Rochambeau on the Subject, but as I am totally a stranger to the whole transaction, I have been under the necessity of referring him to Congress, and have taken the liberty to give him letters of introduction to your Excellency. . . .

Colo. Menonville is likewise charged by the Count Rochambeau, to sollicit some heavy Iron Cannon for the Works at Newport, in place of the Brass Battering Cannon which are at present in them, and which there will be a necessity of removing should the Army remove. When I told him that I knew of nine belonging to the Continent but what were in use, he informed me he understood that there were some in New Hampshire which had been imported for the 74 Gun Ship now upon the Stocks.5 Upon this, I promised him to mention the matter to Congress, and to recommend a compliance with his request, if the Cannon should be there and can be spared without inconvenience.6

Washington’s formal introduction of Menonville in his letter to Huntington dated April 10, moreover, indicates that Menonville’s business with Congress pertained to the exact same subjects:

I beg leave to introduce to your Excellency Colonel Menonville, Deputy Adjutant General to the French Army. This Gentleman, who is charged by his Excellency the Count de Rochambeau with matters respecting a contract entered into by Doctr Franklin, in behalf of the United States, for the supply of a quantity of Provision, will, through your Excellency, lay his business generally before Congress.

He will also, agreeably to the wishes of Count Rochambeau, make an application for some heavy Iron Cannon for the use of the Works at Newport which he understands were imported into New Hampshire for the 74 Gun Ship now upon the Stocks. The Brass artillery at present in them, are the Artillery of Siege, and must be removed should the Army remove. If there are such Cannon in New Hampshire, and there is no probability of their being soon wanted for the purpose for which they were intended, I think a part of them cannot be better applied.

I recommend Colo. Menonville to your Excellencys personal attention as a Gentn of peculiar merit.7

On May 23, 1781, Congress read and apparently accepted a report that a committee had compiled partly in response to “a letter from the Commander in Chief.” The report indicates the committee’s opinion that “the supplies for which Doctor Franklin has entered into engagements with the Minister of finance in France ought to be furnished at all events,” and that the committee “informed the Minister of France, that the request of the Count De Rochambeau to the Commander in Chief relative to heavy cannon, had been complied with by sending an order to the proper officer to furnish them.”8 When delegates to Congress considered the letters Washington sent Huntington, they usually recorded the dates of those missives in the Journals of Congress. The letter from Washington that partially prompted this report, however, is not dated in the congressional journals, probably due to confusion and perhaps also a desire on the part of Congress to spare Washington embarrassment.

Clearly, then, Washington must have written his letter to Huntington that is dated April 10, 1781, in May, likely on May 10. To correct the historical record, the letter will be moved from vol. 31 of the Revolutionary War Series—the volume currently in process of annotation—to vol. 32, which is presently projected to begin with Washington’s correspondence dated May 6. How Washington and his aide-de-camp Tench Tilghman so egregiously misdated both the recipient’s copy and draft of the letter, though, remains a mystery that the editors at the Papers of George Washington will attempt to solve.