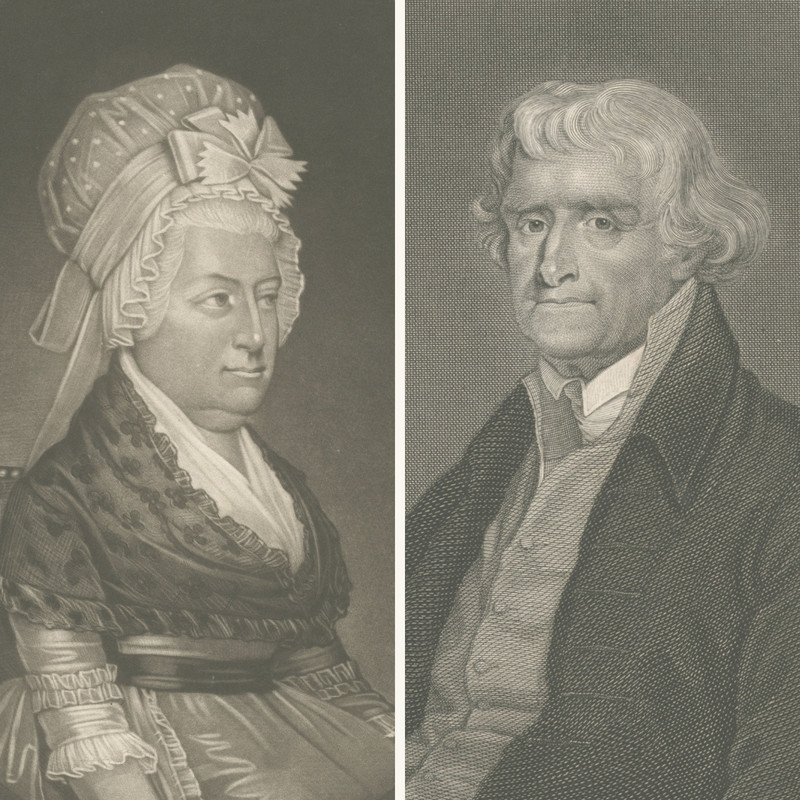 Towards the end of her life, Martha Washington harbored no warm feelings for Thomas Jefferson. A guest at Mount Vernon in 1802 wrote that “she spoke of the election of Mr. Jefferson, whom she considered as one of the most detestable of mankind, as the greatest misfortune our country had ever experienced.”1 Connecticut governor John Cotton Smith wrote that “next to the loss of her husband,” Thomas Jefferson’s 1801 visit to Mount Vernon was “the most painful occurrence of her life.”2 Martha Washington’s granddaughter Eleanor Parke Custis Lewis did not care for Jefferson either. She joked after Jefferson’s election that perhaps now the world was ready for the apocalypse.3 Those familiar with the election of 1800 probably have a fair understanding of why Martha Washington felt this way; tensions between Jefferson and the Washington family had been building for some time. But it can still be somewhat shocking to see Martha Washington—who exists in much of the American imagination as a kind of benevolent, grandmotherly figure—be so sharp-tongued.

So why was Martha Washington angry with Thomas Jefferson? It came down to party politics. Jefferson’s party, the Democratic Republicans, had been increasingly condemning towards the Federalists, and while George Washington tried to remain neutral, the Federalists were, without a doubt, his party. Jefferson’s newspaper, the National Gazette, heaped criticism on the Federalists that could easily be read as personal attacks on George Washington. Although they avoided singling Martha out by name, the National Gazette wrote venomously about her limited, symbolic role in the administration. As the first First Lady, Martha’s duties mostly consisted of making public appearances at levees, ceremonies, and parades, and Democratic Republicans specifically condemned these functions as outrageous “Forerunners of Monarchy and Aristocracy in the United States.”4 It should come as no surprise that Martha responded with “particular pleasure” when one of her Mount Vernon guests informed her that he and his companions were all Federalists.5

A number of suspicious and underhanded letters broadened the distance between Washington and Jefferson. Jefferson was usually savvy enough to hide behind pseudonyms while criticizing George Washington, but in 1797, an unguarded and strongly worded letter, which he had sent to a friend in Europe, ended up being published in both French and American newspapers. Jefferson, assuming that the letter would be private, described Washington as a “Sampson […] whose hair has been cut off by the whore England.”6 Published at a time when the XYZ affair had brought the U.S. and France to the brink of war, Jefferson’s swipe at Washington inspired a storm of public condemnation. Jefferson blamed the “Hamiltonians” and wrote an anxious letter to Elbridge Gerry, fearing that “nothing will be left untried to alienate [George Washington] from me.”7 After Washington retired from the presidency, he received a suspicious letter signed “John Langhorne” (but sent apparently  by Thomas Jefferson’s nephew Peter Carr).8  Although the letter seemed sympathetic to Washington, the fact that the author would hide his identity and connection to Jefferson was troubling. Washington regarded the letter as an attempt by Jefferson to entrap him, and the situation, in Washington’s own words, shook his “belief in the sincerity of a friendship, which I had conceived was possessed for me.”9

George Washington died when these scandals were still fresh and his relationship with Jefferson still acrimonious. An English traveler who visited Jefferson in 1799 summarized a conversation with him, in which Jefferson described Martha Washington as “rather a weak woman” whose resistance to flattery could be attributed “to the goodness of her heart, not the strength of her mind.” George, as Jefferson described, was “despotic in every respect, he mistrusts every man, thinks every man a rogue and nothing but severity will do.”10

Jefferson did not visit the widow Martha Washington to pay his condolences until a full year after her husband’s death, a gesture Federalists considered to be purely political. As John Cotton Smith wrote, “Think of his visiting the tomb of Washington, and shedding crocodile tears…”11 Martha Washington reportedly said she was stunned that Jefferson would visit Mount Vernon as “He must have known […] that we then had the evidence of his perfidy in the house.”12 Whether his visit was truly the second-worst day of her life seems doubtful, but there is no doubt Martha Washington held strong negative feelings for Thomas Jefferson at the end of her life. Party politics then, as now, were difficult to ignore.