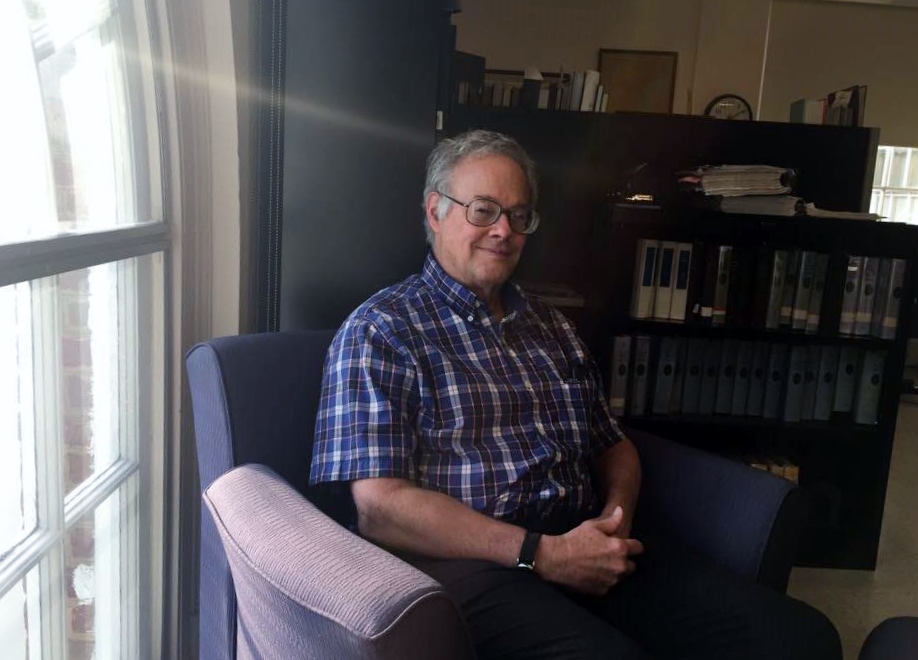 Senior Editor David Hoth’s guiding principle in documentary editing is to display the evidence without influencing a reader’s conclusions. His current focus, George Washington’s Farewell Address, complicates that principle. This document is included in Presidential Series volume 20 and arguably is one of Washington’s most significant contributions to the institution of the U.S. presidency. Hoth’s research into its preparation led him to suggest that we “cannot assume what has always been assumed” of this document.

As one might expect of such a monumental document, it was not written in a day, or even by just one author. Washington asked colleagues not only for constructive criticism but also for full drafts and considerable contributions to existent drafts. Hoth’s first task, then, was to sketch the document’s evolution.

In 1792, as his first term was ending, George Washington asked James Madison to draft a Farewell Address for him. When Washington later was persuaded to serve a second term, he held onto Madison’s completed draft for eventual publication. In 1796, now determined to retire, the embattled president asked Alexander Hamilton for help in revising Madison’s draft.

The political climate in 1796 was contentious: nascent party politics were made uglier by disagreement over foreign policy, especially as it related to the Jay Treaty with Great Britain. In his address, Washington wanted to communicate the wisdom he had learned from his second term and to emphasize his initial intention to resign at the end of his first term. He hoped that referring to Madison’s earlier draft would attest to the honesty of that intention and prevent accusations that he was stepping down because of criticism. Thus, his first draft of a 1796 Farewell Address was a direct quotation of Madison’s 1792 draft, framed by his own additions that reflected events and lessons of the intervening four years.

Washington sent this draft to Hamilton and asked him to revise it, as well as to write a completely new and restructured draft if Hamilton thought it worthwhile. Within a few months, Hamilton duly wrote a new, restructured address, and then further revised that draft in consultation with John Jay. He sent this draft, overwritten with edits, to Washington at the end of July. A few weeks later, he also sent a revised version of the Madison draft. Pleased with Hamilton’s restructured version, Washington decided to continue with it rather than the revised Madison draft. Washington and Hamilton continued to write back and forth in August and September, editing the new draft for confirmation of its final phrasing and organization.

By mid-September, Washington was anxious to publish the address. He was ready to leave office and go home to his “vine and fig tree” in Mount Vernon. Upon receiving Hamilton’s final thoughts, Washington shared an annotated copy of the address with his cabinet, giving them an opportunity to voice their opinions on the passages designated for omission. He then submitted this copy to a newspaper for publication.

In reflecting on these drafts, Hoth noticed a discrepancy:

“We know this is the final draft because of its provenance through the publisher. But the draft submitted to the publisher cannot be the same as the one Hamilton and Washington pass back and forth in August and September. The marginal notes on that copy are different from what they are talking about in their correspondence.”

In his letter to Hamilton that accompanied his revision of Hamilton’s restructured draft, Washington described extensive marginal notations that do not correspond with those in the surviving document. To make the puzzle pieces fit, Hoth postulates a missing draft. He is not the first editor to suggest this: Horace Binney, a nineteenth-century American politician who published An Inquiry into the Formation of George Washington’s Farewell Address, also thought a draft had been lost.

Binney suggested that Hamilton had kept the draft that he and Jay had edited, and then created a “fair copy” (clean draft) of it, which Washington and Hamilton sent back and forth for final revision. The draft Hamilton kept, according to Binney, is the one that survives, and the fair copy that Washington and Hamilton shared was lost. However, Binney was not able to see the surviving manuscript itself. If his theory were correct, the draft that survives should have only Hamilton’s handwriting. In fact, it includes marginal notes in Washington’s hand that mark certain paragraphs as “omitted in address.”

Hoth also postulates a lost fair copy, but a different one than Binney suggests. According to Hoth’s hypothesis, Hamilton sent the copy he and Jay had annotated to Washington, and Washington kept that draft in his papers, then made a fair copy for further revisions. The draft that Washington kept survives, and his fair copy, with annotations that correspond to those he described in his letter to Hamilton, was lost. The penciled notes on the Hamilton-Jay draft marking paragraphs as “omitted in address,” Hoth thinks, were added by Washington after the final version had been submitted for publication. The submitted version, according to Hoth, was a clean copy of the lost draft as emended per suggestions made by Hamilton and, possibly, by cabinet members.

Historians have argued over who wrote which parts of the historic Farewell Address. A lost draft makes these arguments even more speculative. Of course, authorship would be easy to ascertain if the final draft included annotations in both Washington’s and Hamilton’s hands, but unless such a copy is found, their contributions cannot be untangled. Nevertheless, Hoth is clear that, in the deepest sense, the address is Washington’s. Though the architecture is Hamilton’s and the language is a mélange, the ultimate message and meaning of the Farewell Address originated with and were subject to final approval by George Washington alone.