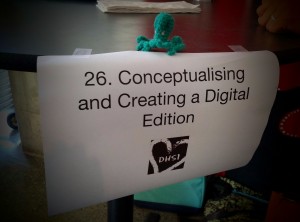 Since 2001, the Digital Humanities Summer Institute, held annually in Victoria, British Columbia, Canada, has been an annual gathering of technologists, scholars, librarians, graduate and undergraduate students…and editors. For the past three years, Jennifer Stertzer (Washington Papers) and Cathy Hajo (The Jane Addams Papers Project), joined this year by Erica Cavanaugh (Washington Papers), have offered a course titled “Conceptualising and Creating Digital Editions,” one of a rich slate of hands-on and theoretical week-long immersions into digital humanities.

The 20 students who took our course came with some incredibly varied and fascinating projects. Just a few include Deanna Stover’s plan to create a digital edition of H.G. Wells’s Floor Games and Little Wars, a 1911 narrative set of gaming rules, Fiona Coll’s work on a digital editions of Morgan Robertson’s short works of fiction based on his sea-going experiences, and Elizabeth Honing’s plan to create a classroom module featuring a digital edition of Richard Hakluyt’s Principal Navigations (1598-1600). The breadth of topics spanned centuries, from Rachel Roberts’ work on Anne Dowriche’s The French Historie (1589) to Eric Rasmussen’s plan to create an online web resource for studying the artistic and social networks around the contemporary American writer Lynne Tillman, and Kate Sikloski’s project to create a digital companion to her critical biography of Tobagonian-Canadian poet M. NourbeSe Philip. Paula Johanson was seeking guidance on turning her guide to kayaking, Green Paddler, into a digital edition, while Ellen Malenas Ledoux investigated creating a critical edition of Mary Darby Robinson’s Memoirs. All the projects represented rich resources that will be greatly enhanced by the editorial work planned for them.

The four-and-a-half-day course covered a lot of ground but was focused on introducing students to many of the editorial issues that arise when contemplating a digital edition. We discussed how the main tasks of editing, selection, transcription, annotation, and research are changed when the materials are presented in a digital platform. We spent time talking about the pros and cons of various digital edition platforms and the tactics editors need to use to adapt them, focusing on TEI/XML, Drupal, Omeka, WordPress, and Scalar. Through description, demonstration, and analysis, we helped students decide between platforms by focusing on the goals of their edition and the nature of their documents.

Students used one of the tools, Omeka, to begin to craft plans for their digital projects. They drafted policies on selection, transcription, annotation, and searching; developed site maps to envision navigation, page appearance, and usability; and estimated the time and work hours that it would take to complete their projects. Students played with metadata by creating sample documents, transcriptions, and descriptions of their materials. They had one-on-one time with Erica, Jennifer and me to ask for advice; to experiment with visualization tools such as text analysis, digital maps, and timelines; and to create rough prototypes of their site plans using Drupal.

DHSI offers many other courses of interest to editors, from intensive work with TEI encoding to text analysis, and project management. Victoria is beautiful (we went whale watching!), and the immersion in hands-on work with other people passionate about documents, scholarship, and technology makes for an experience unlike any other.