The following letter, which will appear in a future volume of the Presidential Series, was first published in George Washington Parke Custis’s Recollections of Washington (Philadelphia, 1861), pp. 41-44. It was reprinted in John C. Fitzpatrick’s Writings of Washington, vol. 34, pp. 91-93. Both sources date the letter as 16 January 1795, but this date is incorrect. Only fragments of the original manuscript, deposited in the Bodleian Library at Oxford University, Great Britain, have been identified. Although the original letterhead no longer exists, the content of the printed letter clearly indicates that Custis made an error in transcribing the date and that Fitzpatrick replicated this mistake in his later publication. A twentieth-century, typed transcript, apparently made by a private owner of the manuscript before it became fragmented, exists in the library of the Mount Vernon Ladies’ Association. Dated 21 March 1796, the transcript matches the extant fragments in Oxford, and together they both suggest that Custis silently emended his grandfather’s capitalization, spelling, and punctuation, and eliminated parts of his grandfather’s letter, especially those that did not pertain to the subject of love and marriage. Custis did this despite his claim to “give it entire, precisely as it was written in the original, now before us.”

The mention of the marriage of Nelly’s eldest sister Betsey, near the end of the letter, clearly places the letter in early 1796, for on Saturday 6 February 1796 George Washington had received a letter from Betsey announcing her engagement (this letter of 1 February has not been found). Another letter, written by Washington to Betsey’s fiancé Thomas Law (link to letter) and owned by the Morgan Library in New York, also suggests that Custis’s date of 1795 was an error.  This letter is part of a series; more information can be found on the “Washington’s Advice on Love and Marriage” page. Please also see related documents below.

In one respect, I have complied fully with my promise to you, in another I have deviated from it in a small degree. I have given you letter for letter, but not with the promptitude I intended; your last of the 29th ult. having lain by me several days unacknowledged. This, however might reasonably have been expected from the multiplicity of my business.

Your letter, the receipt of which I am now acknowledging, is written correctly, and in fair characters; which is an evidence that you command, when you please, a fair hand. Possessed of these advantages, it will be your own fault if you do not avail yourself of them: and attention being paid to the choice of your subjects, you can have nothing to fear from the malignancy of criticism, as your ideas are lively, and your descriptions agreeable. Your sentences are pretty well pointed; but you do not as is proper begin a new paragraph when you change your subject. Attend to these hints and you will deserve more credit from a few lines well adjusted and written in a fair hand, then for a whole sheet scribbled over as if to fill or <missing text> the bottom of the paper, was the principal<missing text> or design of the letter.

I make these remarks not from your letter to me, but because many of those to your Grandmama appear to have been written in too much haste; and because this is the time to form your character, improve your diction.

This much by way of advice and admonition. Let me touch a little now, on your George Town Ball; and happy, thrice happy, for the fair who were assembled on the occasion, that there was a man to spare; for had there been seventy nine Ladies & only seventy eight Gentlemen, there might, in the course of the evening, have been some disorder among the caps; notwithstanding the apathy which oneof the company entertains for the “youth of the present day, and her determination never to give herself a moments uneasiness on account of any of them.” A hint here; men & women feel the same inclinations towards each other now that they always have done, and which they will continue to do until there is a new order of things. And you, as others have done, may find perhaps, that the passions of your sex are easier roused than allayed. Do not therefore boast too soon, nor too strongly, of your insensibility to, or resistance of its powers.

In the composition of the human frame there is a good deal of inflaminable matter; however dormant it may be for a while, and, like an intimate acquaintance of yours, when the torch is put to it, that which is within you may burst into a blaze; for which reason, and especially too, as I have entered on the chapter of advices I will read you a lecture drawn from this text.

Love is said to be an involuntary passion and it is therefore contended that it cannot be resisted. This is true, in part only; for like all things else when nourished and supplied plentifully with [aliment,] it is rapid in its progress; but let these be withdrawn and it may be stifled in its birth or much stunted in its growth.

For example–a woman (the same with the other sex) all beautiful & accomplished will, while her hand & heart are undispared of [turn] the heads, and set the Circle in which [s]he moves on him.

Let her marry, and what is the consequence? The madness ceases and all is quiet again: Why? not because there is any diminuation in the charm[s] of the lady but because there is an end of hope. Hence it follows that love may and therefore that it ought to be under the guidance of reason. For although we cannot avoid first impressions, we may assuredly place them under guard; and my motives in treating on this subject are to show you, “whilst you remain Eleanor [Parke] Custis Spinster, and retain the resolution to love with moderation” the propriety of adhering to the latter; at least until you have secured your game, and the way by which it is to be accomplished.

When the fire is beginning to kindle, and your heart growing warm, propound these questions to it. Who is the invader? Have I competent knowledge of him? Is he a man of good character? A man of sense? For be assured a sensible woman can never be happy with a fool. What has been his walk in life? Is he a gambler? a spendthrift, a drunkard? Is his fortune sufficient to maintain me in the manner I have been accustomed to live, and my sisters do live? and is he one to whom my friends can have no reasonable objection? If these interrogations can be satisfactorily answered there will remain but one more to be asked; that however is an important one. Have I sufficient ground to conclude that his affections are enjoyed by me? Without this, the heart of sensibility will struggle against a passion that is not reciprocated; delicacy, custom, or call it by what epithet you will having precluded all advances on your part, the declaration without the most indirect invitation on yours must proceed from the man to render it permanent & valuable. And nothing short of good sense, and an easy unaffected conduct can draw the line between prudery & coquetry; both of which are equally despised by men of understanding; and soon or late, will recoil upon the actor.

Flirting is hardly a degree removed from the latter and both are punished by the counter game of men, who see this the case & act accordingly. In a word it would be no great departure from truth to say that it rarely happens otherwise, than that a thorough[-paced] coquette dies in celibacy, as a punishment for her attempts [to] mislead others; by encouraging looks, words, or actions, given for no other purpose than to draw men on to make overtures that they may be rejected.

This day according to our information gives a husband to your dear sister; and <missing text>, it is presumed her fondest desires.

The dawn (with us) is bright, and propitious I hope, of her future happiness; for a full measure of which she and Mr. Law have my earnest wishes. Compliments & congratulations on this occasion, and best regards are presented to your Mama, Dr. Stuart & family, and every blessing, among which a good husband when you want & deserve one, is bestowed on you by Your affectionate 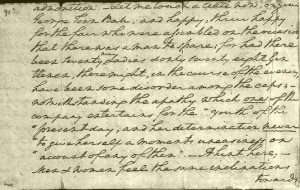 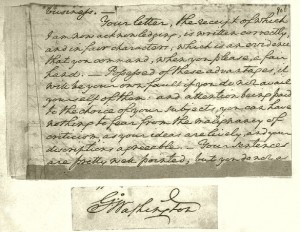 Nelly married George Washington’s nephew Lawrence Lewis (1767-1839), a son of the President’s sister Betty, on 22 February 1799. Nelly found marriage less than envisioned. Their relationship quickly deteriorated and the marriage was not a happy one (Brady, Washington’s Beautiful Nelly, 7-12, 71n).