The June 1784 correspondence between Washington and Robert Morris regards effective icehouse construction. GW requests details from Morris, who writes back on 15 June with information on the construction of and methodology behind the design of his icehouse. Washington later incorporated some of these ideas into his own icehouse at Mount Vernon.

Formerly on Ice, Past Unearthed the Icehouse Found in Philadelphia Gives a Glimpse into Colonial History

The Region – The Philadelphia Inquirer, 23 February 2001
By Faye Flam

When President George Washington occupied the long-demolished Executive Mansion at what is now Sixth and Market Streets, he threw dinner parties every Thursday night. On Philadelphia’s languid summer evenings, said archaeologist Rebecca Yamin, “he would have needed ice.”

Washington probably sent a servant behind the mansion to the ice-house—a huge, stone-lined pit covered with an insulated shed, the remains of which Yamin and colleague Jed Levin excavated over the last year.

Though they knew from historical records that the mansion featured an icehouse, the archaeologists were surprised to find this primitive freezer in such good condition. They were also astonished by its unusual octagonal shape.

“It’s really quite an extraordinary find,” Levin said at a news conference yesterday.

Built by Robert Morris, who is often referred to as the financier of the American Revolution, the icehouse is an unusual example of an amenity that was common among well-to-do Philadelphians of the time. 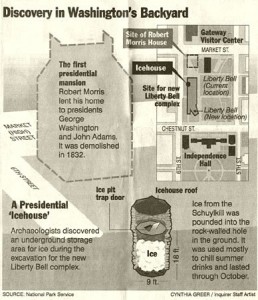 Levin said that people would be hired to go to the Schuylkill in the depths of winter and haul back large chunks of ice. Tons of these chunks would be broken up and thrown into the pits, which in the case of the Morris house stretched 16 feet wide and 18 feet deep. Then people would tamp the ice down, essentially creating a gigantic ice cube.

The well-insulated shed above it would have shielded the pit from the summer heat to preserve at least some ice through summer. As the ice slowly melted, the water would have simply seeped into the gravel-covered ground at the pit’s bottom.

To retrieve ice, the servants probably opened a trap door leading to the pit and cut out a block. Levin said residents might have used the ice to chill drinks or make frozen delicacies. Ice cream, for instance, was popular in colonial times.

Some of the ice might have been used for the more mundane purpose of preserving food, though people of that era tended to rely on smoking, salting, drying and other methods of preservation, Levin said.

What makes the icehouse particularly intriguing, Levin said, is that is became a subject of a 1784 correspondence between Washington and Morris.

It’s not clear exactly when the icehouse was built, but it was probably close to 1780 when Morris built his mansion at Sixth and High Streets from the remains of earlier buildings that had burned down, including the home of Benedict Arnold.

In 1784, Washington, who had often visited Morris in his new mansion, wrote to ask about the design of the icehouse after the snow he had loaded into his own version at Mount Vernon had melted.

“If you will do me the favor to cause a description of yours to be taken, the size, manner of building and mode of managements, and forwarded to me,” Washington wrote, “I shall be much obliged.”

Morris explains some details of the construction, though he never described the reason for the octagonal shape. Levin and Yamin, who work for the archaeology firm John Milner Associates, say the shape might have been the creative whim of a stonemason charged with building it.

In Morris’ reply to Washington, he advised: “I tried snow one year and lost it by June. The ice keeps until October or November.”

In 1790, when Philadelphia was designated as the nation’s capital, Morris lent his mansion to the country’s first president and moved next door.

The uncovering of the icehouse was part of a larger excavation Yamin and Levin carried out in the Independence Mall area, which is being renovated. Such excavations are now required in historic areas before buildings can be constructed.

Yamin said that on Sixty Street, between Market and Arch, she found many fascinating bits and pieces of ordinary life in two “privy” deposits—holes that were once toilets and later trash dumps.

One, dating to the 1790s, was used by William Simmons. According to historical records, Simmons was chief clerk for the auditing office in the federal Department of the Treasury. His boss was Alexander Hamilton.

Little could the accountant have dreamed that people more than 200 years later would rifle through his trash and reveal so much from his personal life.

Though he was considered successful and praised by Hamilton, Simmons lived a spartan life as a bachelor, eating off common, rough-hewn dishes that more refined people would have only used for baking, said Yamin, a fact she divined by noting scratch marks on his plain clay-red dishes.

His personal belongings, including his underwear buttons, were also basic and utilitarian, and his trash was full of ale bottles, wine bottles, gin bottles, and decanters.

“There was so much alcohol-related stuff we thought it was a tavern,” Yamin said.

Yamin said he might have drunk in frustration over his job, which is recorded in conflicts he had with his bosses, or as a way of entertaining members of Congress who would often stay with him when meeting in Philadelphia. It is not known whether he was able to borrow ice from his neighbor, the president, to drink his liquor chilled.

She also unearthed the belongings of members of the Everly family, owners of a comb store in the 1940s. Although they were well-to-do, Yamin said, she found among the ruins a strange, red-clay contraption revealed to be an early version of a Roach Motel—to be filled with molasses for bait.

“You don’t get this from history books,” she said. Such details come from archaeology.

© 2001 The Region – The Philadelphia Inquirer