Washington sometimes noted which currency he was using during a transaction. Several currencies he mentioned included money from Pennsylvania, Maryland, Virginia, Great Britain, and even Jamaica. The image below is a segment of the transcription for Ledger Book 1, 1750-1772, folio 26, on the Contra side. It includes the first few rows of text. For comparison, access the original manuscript image (located at the Library of Congress). 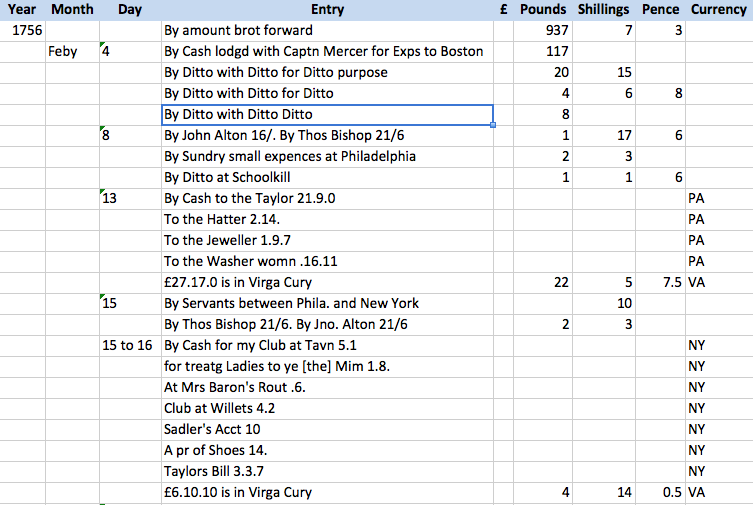 Although all currencies used pounds, shillings, and pence, each one had its local value and different rate. For example, the below, cropped image of January 1772 (Ledger Book 2, 1772-1793, folio 3, Contra side) includes a conversion from Pennsylvania to Virginia currency. So, it’s apparent that Virginia currency was worth more, and at that time GW was using a 25% conversion rate.

Currently we are investigating colonial currency and collaborating with economic historians to analyze how to calculate any unclear conversions and totals. For more information on the units and values of colonial currency, you can read Ron Michener’s “Money in the American Colonies”. Also see Money and Exchange in Europe and America, 1600-1775 by John McCusker for in-depth information on the rate of exchange.