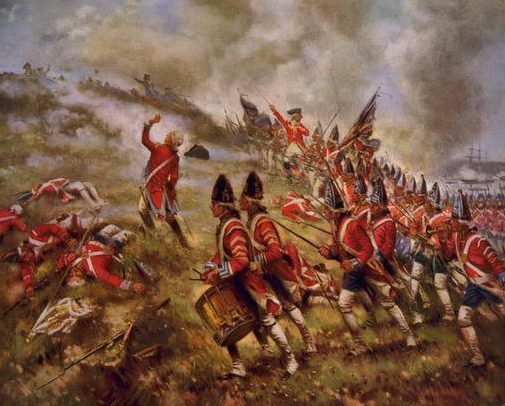 “Why did the British soldiers wear red? That doesn’t seem very smart.”

It might have been Matt, sitting at the very back of the classroom, who asked the question; or it might have been Caleb, a couple of desks away. But it definitely was Sonia who immediately shot her hand in the air with a ready answer.

“It was so the blood wouldn’t show on their uniforms,” she responded knowingly.

So knowingly, in fact, that I was surprised when she couldn’t recall her source of information, other than to indicate it was outside the classroom. It just didn’t seem like the sort of tidbit a fifth-grader would pick up in the course of her everyday reading or conversation. So I tucked away Sonia’s response as another in a pocketful of amusements gathered during my two days of speaking to Mr. Hicks’s social studies class at Meriwether Lewis Elementary School. The more I tried to entertain the fifth-graders, the more they turned the tables on me.

The kids had begun the year learning about the beginnings of the European settlement of North America, and I had helped chaperone a field trip to Jamestown, less than a three-hour bus drive away. During the trip, I mentioned to Mr. Hicks that I worked on a documentary editing project that studies and publishes the correspondence of our Revolutionary War commander and first president. Since that field trip, the classroom focus had moved along the history timeline to the American Revolution, and so it was arranged that I would speak to the class.

On the first day, I focused on the Revolution, with emphasis on a few of the more familiar images (for example, George Washington crossing the Delaware) and such kid-friendly topics as spies, invisible ink, and strange-but-true stories. The latter featured the oddball episode of a junior Continental officer who “huzzah!”-ed his way to a court-martial by failing to control his enthusiasm during a stealth operation—the daring (and nevertheless successful) overnight assault on Stony Point, New York, led by the legendary “Mad” Anthony Wayne. To my delight, the kids were amused. Huzzah.

My return visit, two weeks later, was to focus more specifically on George Washington, and I began again with touchstone images. Soon, visions of felled cherry trees and soaring silver dollars danced through their heads—but only long enough to reveal that today’s fifth-graders are notably more sophisticated than I was at their age. Debunking was hardly necessary. Again, I was thankful; we could spend more time on the real George Washington rather than on exposing the George Washington of Parson Weems’s tabloid-worthy pen. Still, Weems’s efforts at promoting mythology (with, of course, an eye on selling books authored by Parson Weems) yielded an energetic discussion of what lay behind the myths, thus allowing facets of Washington’s character and visage to emerge.

But back to Sonia and those bloody British uniforms . . .

I was about the same age as these kids—perhaps a year or so younger—when I first contemplated those uniforms. At the time, it had nothing to do with social studies or history class. It was all because of an up-and-coming comedian named Bill Cosby. It’s still shocking, if not surreal, that scandal should stain a name celebrated for decades as synonymous with wholesome fun. His rise to the pinnacle of family-friendly stardom began with a series of comedy albums that evoked broad grins and childlike glee. The first of those albums, released in 1963, was appropriately titled “Bill Cosby Is a Very Funny Fellow. Right!” and one of its most popular routines was called “Toss of the Coin.” In this parody of the pre-game football ritual, Cosby imagines what it would be like if wars were begun in the same manner. One such whimsical supposition has a British army officer meeting a Continental counterpart at “midfield” for a coin toss to determine the ground rules for the American Revolution. Upon winning the toss, the team captain for “the settlers” (as Cosby calls the Continentals) declares through a referee that “during the war they will wear any color clothes that they want to, shoot from behind the rocks and trees and everywhere, [and] says your team must wear red and march in a straight line.”

I wish I had thought to offer the kids that explanation for why the British wore those red uniforms. But the truth is, I did not know how to respond to Sonia’s supposition other than to ask where she had heard such a thing. I wanted to rule out the notion that the British wore red merely to camouflage blood (it seemed to me that black would result, anyway), but I had no definitive answer. Later, back at the office, I asked a colleague whether he knew why the British wore red. He confessed that he did not, but he also felt that black splotches, rather than a camouflaged red, would result from battle wounds, and that apparently is the case. So a little research was in order. The first thing I found surprised me: The notion that the British wore red to camouflage bleeding has, indeed, been a long-circulated story. (Where in the world had Sonia learned that?) But it is just that—a story.1 The truth, of course, is never as intriguing as the myth. And as it turns out, there may be more than one truth here.

Ironically, the common-sense question posed by young Matt (or was it Caleb?) might have elicited from any eighteenth-century British clothier a quizzical look and this response: “Well, I suppose it’s only common sense, what?” That’s because practicality often comes down to economics, and in the days before synthetic coloring agents, red was cheaper and easier to produce than any other color—save a drab gray-white—as producing red was a one-step process, while other colors required two stages of dyeing.2

But was there, for the sake of this economy, a trade-off in lives lost because of high visibility on the battlefield? Probably not. Before the rifle replaced the less-accurate and shorter-range musket, the mode of battle—conspicuous lines and columns—made the individual soldier less a target while, on the other hand, the uniforms helped to distinguish friend from foe on a smoke-filled battlefield.

In earlier times, when armies did not wear uniforms, they often sported distinguishing badges, such as feathers. During the Crusades, with warriors increasingly covered under armor and white tunics, or surcoats (to deflect the sun’s rays from the armor), it became difficult to discern an ally from an enemy combatant. So Christian nations began wearing a cross on the tunic, each nation displaying a different colored cross. “Thus the red Cross of St. George became the mark of the English soldier, not only in the Holy Land but also back at home,” where red and white clothing became fashionable among the citizens of London. By the sixteenth century, “the English soldier was more and more wearing a red coat and this soon became his distinguishing mark.” When Oliver Cromwell formed the first English standing army—the New Model Army—in 1645, red became “firmly established as the sign of an Englishman.”3

So there you have it: economics, battlefield tactics, and cultural identity each played a role. And there I have it, too, having learned some interesting history that I would not have thought to research had it not been for a question posed by one fifth-grader and a matter-of-fact response delivered by another. I learned something else, too. In the course of our brief discussion of Washington crossing the Delaware, I noted the importance of when Washington launched the attack and asked whether anyone could tell me when that was. Stella was the only one who raised her hand, and I was both surprised and delighted when she responded, “Christmas!” Afterward, I asked her whether Mr. Hicks had already covered the Battle of Trenton in class. “No,” she said. “Well, then, how did you know the answer?” I asked. “You told me, Daddy—a long time ago.”

Well. What do you know about that, my daughter does listen to me.  I enjoyed learning that.

One thought on “Elementary, kids, it was just bloody good sense: Why, when the dye was cast, the British wore red”