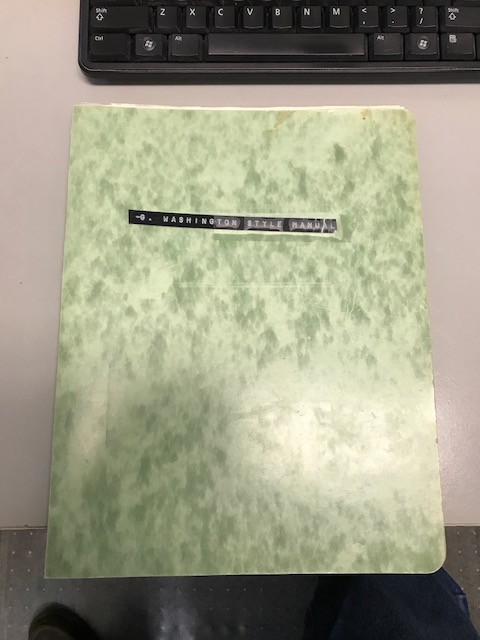 Eventually, I get around to describing what I really do. Copyediting is what I imagine most people think of as editing: correcting grammar, syntax, and spelling; clarifying meaning; and checking for consistency of style and formatting. I do not, I promise, change Washington’s words. Our volume editors carefully and accurately transcribe his letters and documents (hence, “documentary editing”) and then annotate them, researching and explaining all references to people, places, and events so that readers can understand what Washington and his correspondents wrote. It is primarily this annotation that I copyedit.

When I arrived at The Washington Papers, my first task was to read through our in-house style guide. Readers may be familiar with the Chicago Manual of Style, or with MLA or AP style. These guides independently address a plethora of questions ranging from how to hyphenate and capitalize, to the correct use of pronouns (yes, Chicago now sanctions the singular “they”1), to how to cite virtually any source imaginable. Many of us were taught that there is only one right way to do these things. I remember learning in grade school that in a list of three or more items, I should not separate the last two with a comma, and that when typing, I should follow every period with two spaces. The latter rule is a relic of the typewriter age and has been superseded, one of many examples of how written (not to mention spoken) language evolves. The former is still followed by some style guides but not by others,2 indicating that language rules are not universal even at any one moment. This is why The Washington Papers has a style guide.

In the few years I have been with The Washington Papers, we have added to our in-house style guide multiple rules that reflect recent discussions specific to our project. One of the challenges and joys of working on a multivolume documentary editing project is that each volume is part of a much larger edition. Once a style decision is made, we include the new rule in our style guide so that volume editors can apply it moving forward. This week, I am fixing what has been a somewhat haphazard approach to historic college names in past volumes—for example, Columbia University was “King’s College” until 1784, when it was renamed “Columbia College.” The fact that we haven’t been consistent in how we refer to this and similar institutions, even on a long-term project with careful scholars, simply shows the slipperiness of language. The question is not merely one of following rules, but of making the rules in order to follow them in the future.

Style guides, as we know them today, began about a century ago. The first Chicago Manual of Style was published in 1906, the same year as Henry Watson Fowler’s The King’s English. Only 20 years later came Fowler’s Dictionary of Modern English Usage, which, now in its fourth edition, is still a mainstay of writers and publishers.3 These style guides, of course, build on even earlier publications. The author of a 16th-century proto-dictionary introduced his work as an “elementarie which entreateth chefelie of the right writing of our English tung.”4 In 1755, more than a century before the first edition of the Oxford English Dictionary, Samuel Johnson published his Dictionary of the English Language. His preface reminds us of the mutability of language even while it introduces his attempt to impose stability on it:

Those who have been persuaded to think well of my design, require that it should fix our language, and put a stop to those alterations which time and chance have hitherto been suffered to make in it without opposition. With this consequence I will confess that I flattered myself for a while; but now begin to fear that I have indulged expectation which neither reason nor experience can justify. When we see men grow old and die at a certain time one after another, from century to century, we laugh at the elixir that promises to prolong life to a thousand years; and with equal justice may the lexicographer be derided, who being able to produce no example of a nation that has preserved their words and phrases from mutability, shall imagine that his dictionary can embalm his language, and secure it from corruption and decay, that it is in his power to change sublunary nature, or clear the world at once from folly, vanity, and affectation.

With this hope, however, academies have been instituted, to guard the avenues of their languages, to retain fugitives, and repulse intruders; but their vigilance and activity have hitherto been vain; sounds are too volatile and subtile for legal restraints; to enchain syllables, and to lash the wind, are equally the undertakings of pride, unwilling to measure its desires by its strength.5

Sadly, neither Johnson’s dictionary nor any style guide can clear the world of folly. But our in-house style guide does serve the larger purpose of documentary editing–conservation–which Johnson is simultaneously celebrating and lamenting the impossibility of here. We publish Washington’s papers to preserve his words and wisdom for any and all to read and use. Our in-house rules, as pedantic as they may sometimes appear, help stabilize our approach, making those words and their annotation as consistent and comprehensible as we “sublunary”6 mortals can make them.