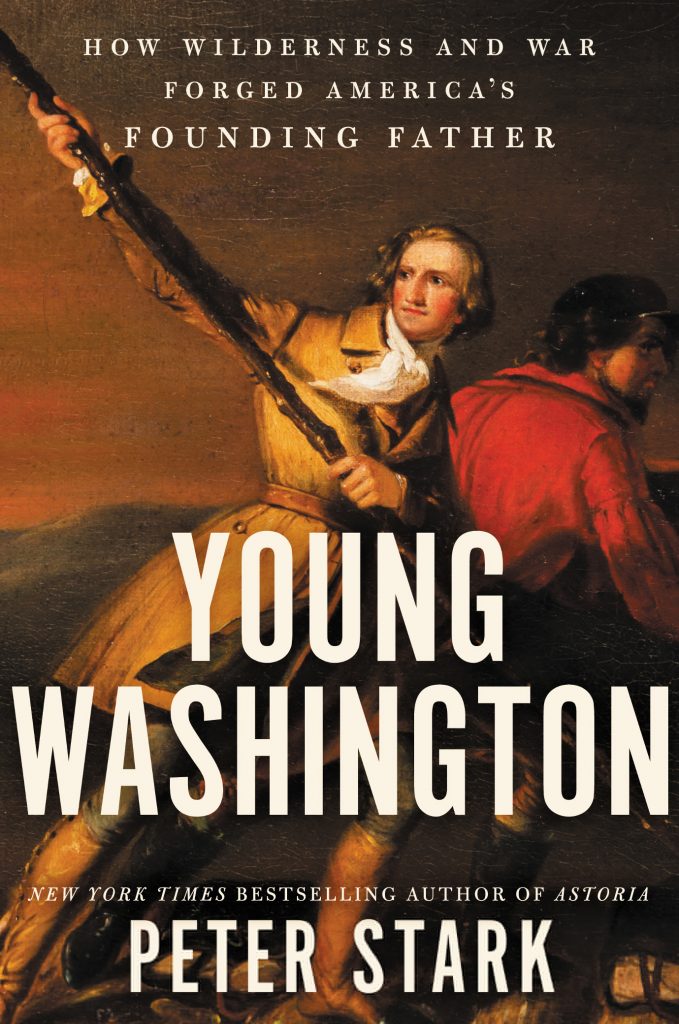 by Katie Blizzard, Communications Specialist
May 17, 2019

The tired, sodden travelers rode into the old Indian town of Venango at the mouth of Rivière Le Boeuf. Twenty-one-year-old George Washington had never traveled this deep into the wilds. He had now ridden nearly five hundred miles from the elegant plantations of coastal Virginia, over the crest of the Appalachians, far into the Ohio Valley wilderness, a great forest in America’s interior approximately the size of Spain.

So opens author Peter Stark’s newest book, Young Washington, a biography which details the eventful frontier expeditions of the young George Washington. Like Stark’s other books (which include the bestseller Astoria), Young Washington is meant to be read as a “wilderness adventure,” according to Stark. It includes vivid descriptions of the cultural and physical environments that Washington encountered during his journey, and involves the reader in the experiences that molded the ambitious young traveler into the Washington we know today. Interested to learn more about Stark and his engaging style of writing about history, communications specialist Katie Blizzard, joined by former Washington Papers editor in chief Theodore Crackel, sat down with Stark in late April to discuss Young Washington.

Stark’s work on Young Washington began with a satellite image of the eastern American seaboard. He had been looking for “blank spaces” in the United States—those areas without light, and thus without people—and found to his surprise a large swath of such space in western Pennsylvania. During preliminary research of the area, Stark was introduced to someone who had already explored that mountainous and thickly forested backcountry: “I kept running into young [George] Washington.”

Stark was generally familiar with the story of Washington. But this younger version did not fit with the image of the stoic leader he knew. “He was kind of a mess,” said Stark. “He was really ambitious. Struggling to make a name for himself and seeking validation. Sinking into these letters, you could really sense the needs he has on an emotional level.” Young Washington’s personality, Stark concluded, was not well-suited for leadership.

However, as a result of (and in spite of) his heady ambition, Washington, at the age of 21, was tasked with the difficult responsibility of reclaiming the Ohio frontier in the name of the British crown (as well as for the Ohio Land Company, a land-speculating organization, in which members of Washington’s family and Virginia’s acting governor Robert Dinwiddie had vested interests). In Stark’s opinion, the character evolution required for an initially immature Washington to grow into so great an individual made the legendary leader’s story all the more inspiring:

What was so amazing is that given where he started, how far he went, how he did become a great leader.…[H]e didn’t have all the resources—the tools and the personality—to go on to greatness, but he figured it out. He learned and owned up to his failures in some deep way.…I ended up finding this version of George Washington, the one where you see his struggles and difficulties as a young man, as a much more inspiring and accessible version of Washington than the one that exists in our national mythology.

The story of Washington’s youth was also, in a way, a “blank space.” It was a part of history often overlooked due to its limited documentation. So, for Stark, the real research began, as it always does for him, with travel. He visited all of the spots essential to understanding the young Washington and his colonial Virginia life: the grave of Gen. Edward Braddock (the man who led British and Colonial forces into the Ohio frontier after the French refused to vacate the coveted region); portions of the route that Braddock and his troops took; Washington’s childhood home, Ferry Farm; Mount Vernon; and Colonial Williamsburg. Stark also explored the coastal region of Virginia, known as the Tidewater, a lowland swamp-scape, the fertile land of which appealed to Virginia planters. These places, Stark mused, were much different from the Montana environment he currently calls home.

Stark’s investigation was further illuminated by Washington’s own writing, which he was amazed he could easily access via the free-to-use website Founders Online.1 Now, at events for Young Washington, Stark excitedly shares information about this resource, noting “how beautifully annotated these papers are” and how anyone “can look them up tonight.”

Additional insight came from secondary sources, like Joseph Ellis’s His Excellency and Douglas Southall Freeman’s seven-volume biography of George Washington. With its focus on Washington’s presidency, His Excellency illustrated for Stark the culmination of Washington’s emotional evolution. And Freeman’s work, which relates in great detail the entirety of Washington’s life, extensively charted the young man’s movements in the Ohio frontier. But while both materials outlined Washington’s life in narrative form, neither evoked that spirit of adventure that Stark has sought to create as a writer.

Having been “steeped in an outdoorsy life from a young age,” Stark said, he has “worked hard to portray that [adventurous] life.” With undergraduate training in English and anthropology, he earned a masters degree in journalism at a time when “a wave of journalism focused on creating a participatory, first-person reading experience.” Stark started his career as a freelance journalist for Outside Magazine, recounting his adventures around the globe. For his first assignment, he visited the upper peninsula of Michigan and a group of expert Nordic skiers taught him how to ski-jump. Currently interested in the history of exploration, Stark now uses his journalism and outdoors skills to “make these [historical] experiences,” like those of George Washington, “as alive as possible.”

So, where to go from here? Well, Peter Stark’s already working on another story, one that will include some of the characters and settings from Young Washington: the story of the Indian general Tecumseh and his role in uniting the Ohio Valley Indian tribes into a confederacy.

My thanks to Theodore Crackel for his help in conducting the interview, to Peter Stark for taking the time to speak with us, and to James Faccinto for arranging this conversation.

1. Founders Online is as “an official website of the U.S. government administered by the National Archives and Records Administration (NARA) through the National Historical Publications and Records Commission (NHPRC), in partnership with the University of Virginia Press.” It includes material from The Washington Papers, as well as from other editing projects about founding-era leaders, such as the Adams Papers (at the Massachusetts Historical Society), the Papers of James Madison (at the University of Virginia), and the Papers of Benjamin Franklin (at Yale University), among others.

Founders Online is one of three ways that readers can access materials from The Washington Papers. The other two are our print and digital editions, both of which can be purchased from the University of Virginia Press (details for purchasing volumes of the print edition available here; details for purchasing a subscription to the digital edition available here). These editions provide access to materials, such as an index and specially produced maps, not available on Founders Online.