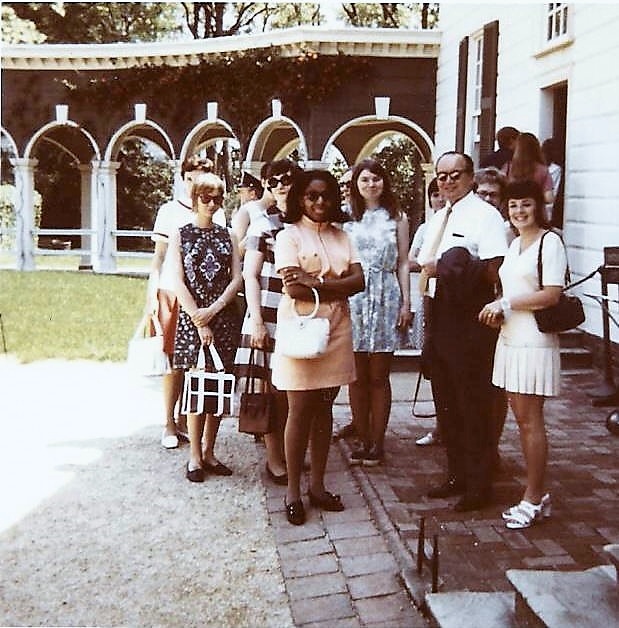 Virginia state archivist William J. Van Schreeven and University of Virginia president Edgar J. Shannon, Jr., played critical (yet now-overlooked) roles in founding The Washington Papers. In a proposal dated Oct. 18, 1966, Van Shreeven called for the publication of a comprehensive edition of the papers of George Washington. Not only was there a need for this sort of project (previous editions contained only Washington’s outgoing correspondence or selected incoming letters), but the American Revolutionary War Bicentennial promised interest and a favorable funding environment.1 Picking up on the idea, Shannon formed a committee in January 1967 to explore the venture. He chose William W. Abbot, then-James Madison Professor of History at UVA, as chairman, and enlisted seven others from the university community to serve as members, including Dumas Malone, eminent Thomas Jefferson biographer; Victor Reynolds, founding director of the University of Virginia Press; and Anne Freudenberg, curator of the Clifton Waller Barret Collection of American Literature.2

The committee’s endorsement prompted a search in early spring 1968 that sought out Donald Jackson to launch the initiative to publish George Washington’s papers. Jackson, who earned his PhD from the University of Iowa in 1948 and served as director of the University of Illinois Press, initially balked at the offer. He believed that he lacked a suitable background, but Shannon “and the search committee explained that they were seeking not so much a Washington scholar as someone who had experienced the trials of running an office filled with editors, typists, and bales of manuscript, and who also knew the processes of historical documentation. Western historian, Southern historian, it hardly mattered; the principles and procedures did matter, and Washington scholars could not only be consulted but also hired.”3 Having persuaded Jackson to join the undertaking, Shannon applied to the National Endowment for the Humanities (NEH) on April 20, 1968, for financial backing. The application boldly—and rashly—predicted that a “definitive edition will not exceed 75 volumes,” with “the final volume to be published in 1988.”4

Needing money to match expected NEH support, Shannon appealed to the Mount Vernon Ladies’ Association of the Union to co-sponsor the project. He received a positive response from Rosamund Randall Beirne, who then led the association as Regent. Appreciative of this commitment, Shannon delivered a speech at Mount Vernon on Oct. 26, 1968. He hoped the speech would build momentum and find new funding avenues once special appropriations from the Virginia General Assembly to the university’s budget ended in two years. “Our new edition of his papers will not guarantee that ‘the real Washington’ will emerge in the future writings of historians,” Shannon observed, but we “know that our edition will make this possible.” The project would eventually find long-term financial support from the National Historical Publications Commission (NHPC), a federal agency that since has become the National Historical Publications and Records Commission (NHPRC). In his speech, Shannon called “a complete and carefully prepared edition” of Washington’s papers “a third monument” to the great man, after the Washington Monument and the “loving care” with which Mount Vernon was preserved. Shannon promised “dedicated effort” to complete the work in a timely manner and announced that its national scope would be reflected in a board of advisers with “persons from the Midwest and the West Coast, the South as well as the Northeast.”5

Although President Lyndon B. Johnson apparently never replied to an invitation to sit on the board, the inaugural advisory committee achieved wide representation. Particularly noteworthy among the 24 individuals were:

President Richard Nixon’s letter to Shannon on White House stationery in 1970, in which the president expressed his “best wishes for the successful completion of this important effort,” demonstrated that people in high places knew about the endeavor.7

The publicity surge receded as Jackson assembled a staff and implemented procedures to locate, gather, organize, and transcribe documents. In a few modest (but refurbished) offices on Alderman Library’s fifth floor,8 about a dozen people toiled throughout the first years to accession tens of thousands of documents and generate preliminary transcriptions. Jackson considered cataloging these documents on a mainframe computer—then the technological apex. However, he gave up in frustration when an easy-to-use program was hard to create.9 Decades passed before friendlier software allowed computerized control over the documents. In the meantime, the project began with traditional card files that included information for sender, recipient, date, and accession order.

Arguably the most consequential decision during the first years was hiring Dorothy Twohig as associate editor. Writing in early 1969, Jackson advised Twohig that he valued her experience as an editor with the Papers of Alexander Hamilton more than he worried about completion of her dissertation. Before the month concluded, he visited Twohig at Columbia University to discuss the project, and Twohig subsequently visited Charlottesville to ask “a number of questions about the editing problems which will arise.” Describing her trip as “one of the pleasantest holidays I’ve had for a long time—and a great introduction to Charlottesville and the University,” Twohig joined the Papers of George Washington that summer and filled many vital roles until her retirement as editor of the project in 1998.10 With Twohig’s hiring, female staff members further outnumbered men in the office, then something atypical in the academic world. Another significant hire was Patricia DeBerry, who was African American and transcribed documents. Her presence indicates a step toward inclusiveness during a period not far removed from the massive resistance in Virginia to public school integration.

The Ladies at Mount Vernon eagerly awaited the first publication, which would be Washington’s diaries. The regent, Elizabeth Throckmorton Cooke, reported in 1971 that “planning calls for release of a three volume edition of the diaries in late 1973 or early 1974.”11 The first diary volumes finally appeared in 1976, and a sixth volume completed the set in 1979.12 Cooke’s successor as regent, Frances Claiborne Guy, reported in 1977 that Abbot, now project editor, planned “to bring out other volumes of the Papers on a more rapid schedule.”13 Abbot, who once edited The William and Mary Quarterly and the Journal of Southern History, replaced Jackson, who retired as work wound down on the diaries.14

Abbot divided the edition into five series so that editing on all phases of Washington’s life could proceed simultaneously. Philander D. Chase, who earned his PhD from Duke University before joining the Papers of George Washington in 1973, launched the Revolutionary War Series, Twohig undertook the Presidential Series, and Abbot oversaw the Confederation Series and Retirement Series. All editors previously had worked collaboratively on the Colonial Series. Beverly H. Runge, an early staff member who remained with the project until her death in 2008, brought exceptional expertise on Virginia history and contributed to every series.

With single editors taking responsibility for each volume, the pace of publication reached two volumes per year—a standard retained with admirable regularity through the editorships of Chase (1998–2003) and Theodore J. Crackel (2004–2010). Between the diaries and various chronological series, 70 volumes of The Papers of George Washington are now in print, and six more are in some stage of preparation.  Discussions with the University of Virginia Press to develop a digital edition began under Chase and came to fruition under Crackel. The Papers of George Washington Digital Edition serves as the cornerstone of Rotunda, the digital imprint of the University of Virginia Press.

Financial support during these decades continued from the Mount Vernon Ladies’ Association, University of Virginia,  NHPRC, and NEH, with significant augmentation from a new source, the Packard Humanities Institute. In 2015, the Florence Gould Foundation, a private foundation with an interest in the history of Franco-American relations, made a substantial commitment to the project and its Revolutionary War Series.

In January 2018, The Washington Papers welcomed a new director and editor in chief: Jennifer E. Steenshorne from The Selected Papers of John Jay at Columbia University. As this new chapter begins, the Papers is proudly fulfilling the vision and expectations of its founders, with optimism and vigor.