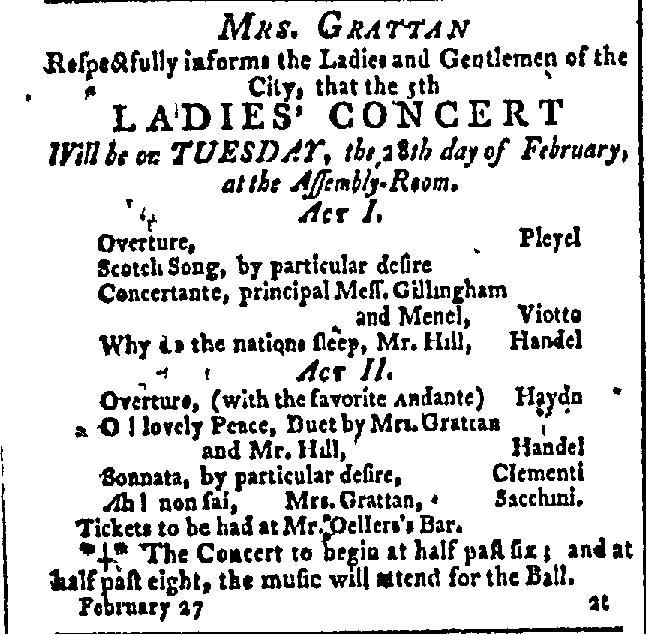 The digital edition of The Papers of George Washington not only provides wider public access to our research, but also gives the editors the opportunity to revise and extend our work as more or better information becomes available. The most important manifestation of that ability will be the forthcoming addendum that will make available many documents received too late for presentation in the appropriate book volumes, but a smaller effort recently unveiled a human interest story that reminds us again that George Washington encountered many interesting characters besides the powerful and famous men celebrated as the founders of our country and that The Papers are a resource for cultural and social as well as political and military history.

On February 28, 1797, Washington recorded in his diary that he “Went to Mrs. Grattons concer[t] in the Evening.” Scanning the newspapers then available, the diary editors provided our readers with a summary of this “Fifth Ladies Concert” and correctly surmised that Grattan might be the woman who operated a linen and muslin warehouse in Philadelphia, but they were unable to fully identify her.1 Mrs. Grattan has also found a place in early histories of music in America, one of whom calls her “our first lady manager” while another characterizes her as “an enthusiastic amateur musician and singer,” but they too know her only as Mrs. Grattan.2 Perhaps, I thought, new internet resources, most notably the searchable newspaper databases, might make it possible to put a name to this early musician.

Philadelphia newspapers do indeed tell us much more about Mrs. Grattan. She arrived at Philadelphia with her family in August 1796 aboard a ship from Bristol, England. By December of that year, she was selling subscriptions to the first of a planned eight concerts. In January 1797 she opened the linen warehouse, and by June 1797 (as Grattan and Company) she was advertising imported perfumes and men’s shirts and (incidentally) offering to take in boarders. She kept the boarding house open even during the yellow fever that struck Philadelphia that fall, and in November she advertised a new series of four concerts and balls for the winter, the first to feature a band from New York. By “necessity” the second concert in that series was advertised “for the maintenance of her family”,and by popular demand the subsequent concert became just a ball with refreshments.3 In November 1798 Grattan announced that on her return from the country she was re-opening her boarding house and offering perfumery for sale. And then she ceased to advertise.

To my frustration, at no time did the papers supply Mrs. Grattan’s name. However, buried in news from London reported in Claypoole’s American Daily Advertiser of October 27, 1797, was a brief notice that would unlock the mystery. The notice, copied from the London Evening Mail of August 25-28, reads: “The Hon. Mrs. Grattan, sister to Lord Viscount Falkland, has opened a milliner’s shop in Philadelphia. About three months ago she gave a concert, at which almost every person of consequence in that city appeared.” Heraldry books confirm that indeed a sister of Viscount Falkland had married Major John Grattan of the British army at Calcutta in 1783: the newspaper notices give her maiden name as Lucia Cary.4

The remainder of Mrs. Grattan’s story is quickly sketched. She apparently moved to Charleston, South Carolina, where she appeared at concerts in late 1798 and early 1799, and then to Havana, Cuba, where tragedy struck.5 A notice in the Philadelphia Gazette, July 31 1799, reported that the “only son of the hon. Mrs. Lucia Grattan, widow of col. Grattan, late quarter-master-general of India” had died there of yellow fever, as had two of her servants. Grattan returned to the United States, but not to Philadelphia. She offered a concert at New York in 1800.6 On February 17, 1801, the Newport Mercury (Rhode Island) reported that “the Hon. Mrs. LUCIA C. GRATTAN, widow of the late Col. Grattan, (cousin german to the Right Hon. Henry Grattan, the celebrated Irish Orator) and eldest sister of Lord Viscount Falkland” had died there on February 12. According to findagrave.com, she rests in the Common Burying Ground at Newport. The musical entrepreneur of Philadelphia was apparently a daughter of British aristocracy, impoverished by the death of her husband and struggling to provide for her son and at least three daughters.

3 thoughts on “Finding the Missing Pieces: Uncovering the Story of Mrs. Lucia Grattan”