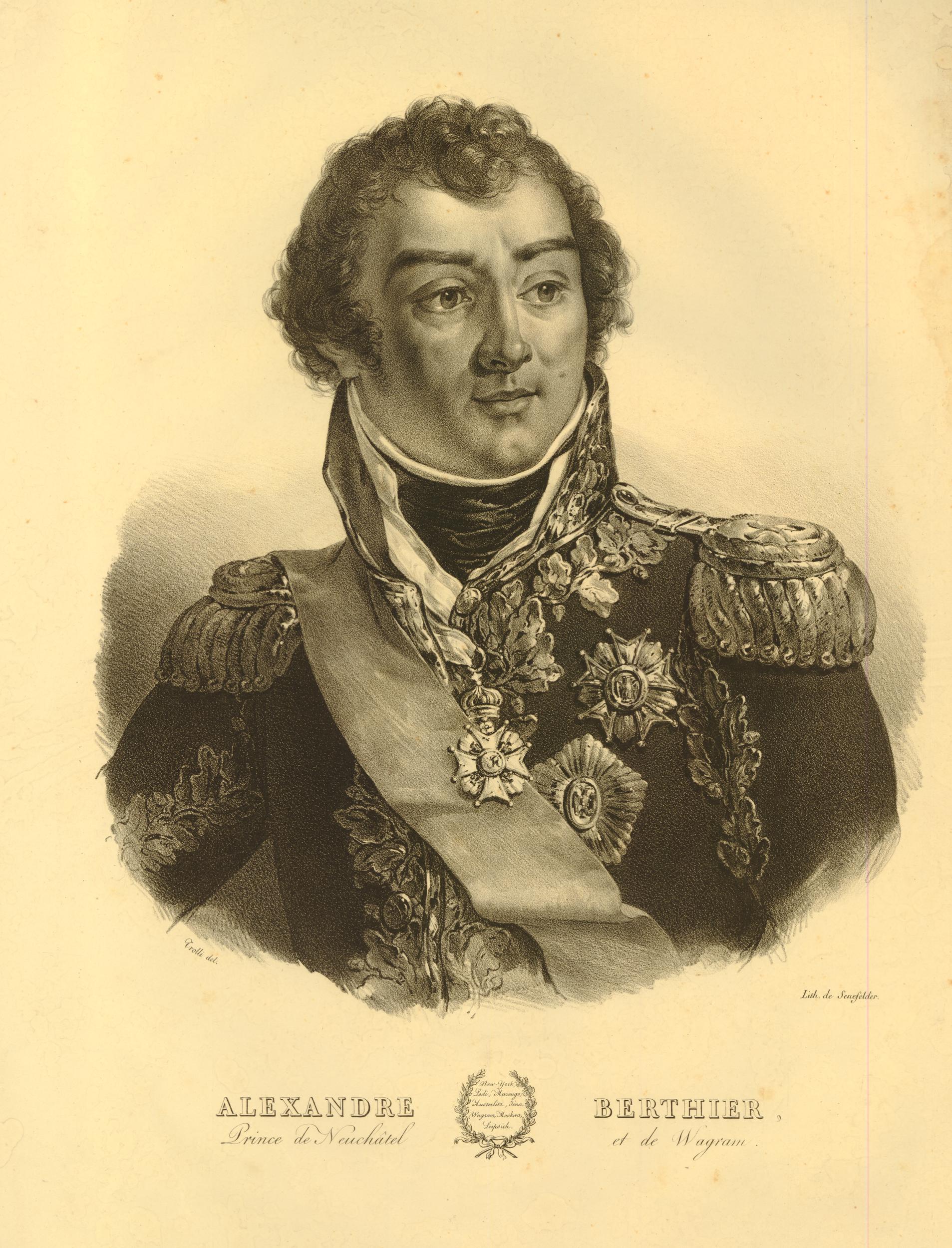 On July 6, 1781, the French army under the command of Lt. Gen. Jean-Baptiste-Donatien de Vimeur, comte de Rochambeau, after having marched from Providence, R.I., to Westchester County, N.Y., joined the Continental army commanded by Gen. George Washington at White Plains, New York. The rendezvous marked the first time the armies had operated together since the French had arrived at Newport, R.I., a year earlier. The rendezvous gave several young French officers in Rochambeau’s army their first look at the soldiers in Washington’s army and, for some, their first look at Washington.

Several of these French officers wrote very valuable (for the military historian) journals recording the events of their time in America during the Revolutionary War:1

Louis-Alexandre Berthier (1753-1815), who later became a Marshal of France under Emperor Napoleon Bonaparte, was the son of the chief of the topographical engineers of the French Royal Army. His father trained Louis-Alexandre in that profession and secured him an appointment in the army, where he rose to captain by the time he joined a regiment bound for the United States as part of Rochambeau’s army.

Jean-François-Louis, comte de Clermont-Crèvecœur (1752-1824), who eventually rose to the rank of colonel, was the son of a noble of Lorraine who had served in the Austrian army. After attending the French Royal Artillery School, Clermont-Crèvecœur became a second lieutenant in the Auxonne Regiment in 1769. In April 1780, shortly before his departure for the United States, he received a promotion to first lieutenant in an artillery company.

Capt. Hans Christoph Friedrich Ignatz Ludwig von Closen-Haydenburg (1752–1830), son of a baron and lieutenant colonel, was from the French province Palatinate-Deux-Ponts. The young Baron Closen, following in the footsteps of several of his relatives, joined the Royal Deux-Ponts regiment in 1769. Upon the arrival of the French army in America, Rochambeau named Closen one of his aides-de-camp, a position that makes Closen’s journal particularly valuable.

Marie François Joseph Maxime, Baron Cromot du Bourg (1756–1836), who would eventually rise to be a major general, was the son of a wealthy government official. He joined the French army in 1768, becoming a captain in the dragoons in 1774. Like Closen, Cromot du Bourg served as one of Rochambeau’s aides-de-camp, and his journal is likewise of great interest for military historians.

Having been sent ahead to White Plains on July 4 to report to Washington the approach of the French army, Closen was the first of these officers to see the Continental soldiers. “I had a chance to see the American army, man for man,” Closen wrote. “It was really painful to see these brave men, almost naked, with only some trousers and little linen jackets, most of them without stockings, but, would you believe it? very cheerful and healthy in appearance. A quarter of them were negroes, merry, confident, and sturdy.”2

The day before the rendezvous, Washington paid a visit to Rochambeau while the French army was encamped at North Castle, N.Y., about ten miles north of White Plains. Captain Cromot du Bourg recorded his first impression of the American general:

Notified of his approach, we mounted our horses and went out to meet him. He received us with the affability which is natural to him and depicted on his countenance. He is a very fine looking man, but did not surprise me as much as I expected from the descriptions I had heard of him. His physiognomy is noble in the highest degree, and his manners are those of one perfectly accustomed to society, quite a rare thing certainly in America. He paid a visit to our camp, dined with us, and later we escorted him several miles on his return and took leave of him.3

On Saturday, July 7, and the following morning, the officers of the two armies exchanged “friendly visits” while also conducting a “more extensive reconnaissance of the neighborhood” of the joint camp.4 On the afternoon of the 8th, Washington reviewed the two armies. Cromot du Bourg wrote:

We went first to the American army, which may have amounted to four thousand and some hundred men at the most. It seemed to me to be in as good order as possible for an army composed of men without uniforms and with narrow resources. The Rhode Island regiment, among others, is extremely fine. We went thence to the French army, which, though unpretending, has quite another style. The Americans admit it; they all seemed to be delighted as well as their General.5

Closen, also present with the two generals on this occasion, recorded his impression of the Continentals paraded for inspection:

The whole effect was rather good. Their arms were in good condition; some regiments had white cotton uniforms. Their clothing consisted of a coat, jacket, vest, and trousers of white cloth, buttoned from the bottom to the calves, like gaiters. Several battalions wore little black caps, with white plumes. Only General Washington’s mounted guard and Sheldon’s legion wore large caps with bearskin fastenings as crests. Three-quarters of the Rhode Island regiment consists of negroes, and that regiment is the most neatly dressed, the best under arms, and the most precise in its maneuvers. The American army is always drawn up in two lines, a custom which we have also adopted.6

The contrast between these well-clad troops and the poor clothing of the Continentals whom Closen observed on the 4th leads one to believe the Continental officers had selected their best-uniformed and best-disciplined soldiers to parade for Rochambeau and the French officers on the 8th.

Lieutenant Clermont-Crèvecœur, who attended this review as well, received a different impression of the Continental soldiers:

On 8 July General Washington reviewed the two armies. I went to the American camp, which contained approximately 4,000 men. In beholding this army I was struck, not by its smart appearance, but by its destitution: the men were without uniforms and covered with rags; most of them were barefoot. They were of all sizes, down to children who could not have been over fourteen. There were many negroes, mulattoes, etc. Only their artillerymen were wearing uniforms. These are the élite of the country and are actually very good troops, well schooled in their profession.”7

Captain Berthier did not give his initial impression of the American troops, but he recounted Washington’s visit on July 8 to the “little camp” where Berthier and two of his fellow officers had pitched their tents. Following his review of the armies, the American general dined with the French quartermaster-general, for whom Berthier and his companions served as aides-de-camp. Washington visited their camp after the meal:

On his arrival a military band posted a short distance off played marches and continued to play until he left. As he passed our tents he looked at the papers on our tables and saw what we were studying. On Dumas’s table was the evacuation of Boston and the surrender of General Burgoyne’s army; on the Chevalier Lameth’s were the battles of Trenton and Princeton and the evacuation of Philadelphia; on mine were the landing of the French army in America, its position in Rhode Island, and its junction with the American army commanded by General Washington, with all the related plans. Despite his modesty, he seemed pleased to find thus assembled all the successful and pleasant events of the war. He then repaired to the “tavern” to rest on the couch of turf. Beside it was a table with Madeira wine and punch, according to the American custom. He drank some with our generals and his whole suite, whereupon we all mounted our horses and escorted him back to his camp.8

Later in July, after participating in a series of reconnaissances with Washington, Rochambeau, and their dragoon escorts that involved some exchanges of fire with British troops, Closen recorded additional remarks about the American soldiers and their leader:

I admire the American troops tremendously! It is incredible that soldiers composed of men of every age, even of children of fifteen, of whites and blacks, almost naked, unpaid, and rather poorly fed, can march so well and withstand fire so steadfastly. The calm and calculated measures of General Washington, in whom I discover daily some new and eminent qualities, are already well known, and the entire universe accords him the homage of its highest esteem. He is certainly admirable as a leader of his army, in which everyone regards him as his friend and father.9

The journals of these French officers provide the editors of the Revolutionary War Series of The Papers of George Washington (and other historians) with an invaluable resource as we annotate Washington letters from this period. The relations between the French and Americans that they detail would become critically important as the French and American armies united and began preparations for the campaign that would lead to the decisive battle of the war at Yorktown, Va., in October 1781.