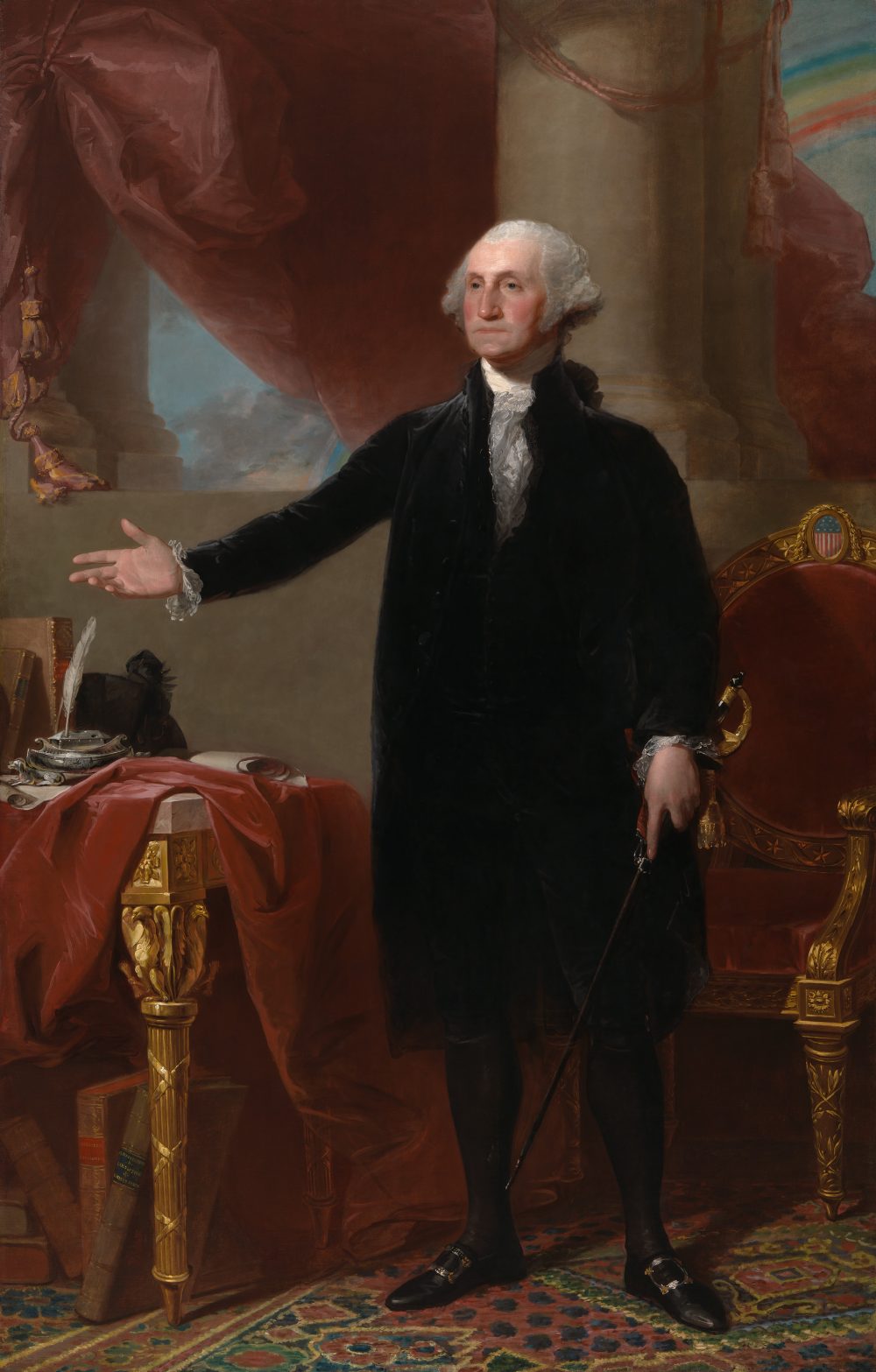 by Adrina Garbooshian-Huggins, Assistant Editor
May 10, 2019

The final five-and-a-half months of George Washington’s presidency, which will be chronicled in Presidential Series vol. 21 of the Papers of George Washington, were devoted to domestic and foreign relations issues that involved, among other things, Indian affairs, construction progress on the U.S. Capitol, heightened tensions between France and the United States, and diplomatic relations with the Barbary powers. Nevertheless, private letters to family and friends, containing moral and educational advice as well as words of comfort and empathy, still abounded in Washington’s correspondence as he approached the end of his political career. Washington’s more notable correspondents during this period include his step-grandson, George Washington Parke Custis; his friend and former secretary of war Henry Knox; and prominent Philadelphian and longtime confidante Elizabeth Willing Powel.

George Washington “Wash” Parke Custis’s matriculation into what is now Princeton University in the late fall of 1796 provided Washington with an opportunity to offer Wash some guidance in matters related to moral conduct, study habits, and friendship. Six extant letters from Washington to Custis, dated between Nov. 15, 1796 and Feb. 27, 1797,1 illustrate the role that the president assumed, during his last months in office, as a mentor and father figure to his step-grandson. For instance, in his letter of Nov. 15, 1796, Washington attempted to arouse in Custis a thirst for knowledge, which he expected would prove beneficial to both the young man and to the nation as well. Washington, moreover, wanted Custis’s achievements to result from merit and hard work and “not from the labors of others.” After entreating his step-grandson to show kindness to his classmates, obedience to his tutors, and respect for then-university president Samuel Stanhope Smith, Washington offered him the following directive: “Never let an indigent person ask, without receiving something, if you have the means.” Washington’s efforts to instill habits of charity in Custis reflected his own values; Washington’s financial papers show countless contributions to the poor, to victims of fires and other disasters, and to institutions such as churches and academies.2

Washington’s letters to Custis also provide a window into his personal views on friendship, virtue, vice, and religion. On Nov. 28, 1796, the retiring president wrote Custis: “The assurances you give me of applying diligently to your studies, and fulfilling those obligations which are enjoined by your Creator and due to his creatures, are highly pleasing and satisfactory to me. I rejoice in it on two accounts; first, as it is the sure means of laying the foundation of your own happiness, and rendering you (if it should please God to spare your life) a useful member of Society hereafter.” This statement suggests that Washington’s beliefs in the value of hard work and charity stemmed, at least in part, from his religious views. In other words, Washington appears to express the notion that man, as a moral being and creation of God, has an obligation to be industrious and charitable. In the same letter, Washington defined his idea of friendship:

Tis well to be on good terms with all your fellow students, and I am pleased to hear you are so; but while a courteous behaviour is due to all, select the most deserving only for your friendships, and before this becomes intimate, weigh their dispositions & characters well. True friendship is a plant of slow growth; to be sincere there must be a congeniality of temper & pursuits. Virtue & vice cannot be allied; nor can industry and idleness; of course, if you resolve to adhere to the two former of these extremes, an intimacy with those who incline to the latter of them, would be extremely embarrassing to you; it would be a stumbling block in your way; and act like a Millstone hung to your neck.

A missive of March 2, 1797 to Henry Knox3 further sheds light on the religious beliefs of the notoriously private Washington. After learning of the recent deaths of three of Knox’s children (George Washington, Augusta Henrietta, and Marcus Bingham Knox), Washington wrote his longtime friend: “From the friendship I have always borne you—and from the interest I have ever taken in whatever relates to your prosperity & happiness, I participated in the sorrows which I knew you must have felt for your late heavy losses. But it is not for man to scan the wisdom of Providence. The best he can do, is to submit to its decrees. Reason, religion & Philosophy, teaches us to do this, but ’tis time alone that can ameliorate the pangs of humanity, & soften its woes.” Another private letter, written to his nephew William Augustine Washington on Feb. 27, 1798, expressed a similar concept of Providence.4

Washington’s private letters, written during brief pauses from the routine and sometimes tedium of his official duties as president, often revealed his emotions and personal feelings about the ubiquitous attacks launched against his administration and character in newspapers and elsewhere. In his March 2 letter to Knox, Washington articulated his innermost frustrations at the current political climate: “To the wearied traveller who sees a resting place, and is bending his body to lean thereon, I now compare myself; but to be suffered to do this in peace, is I perceive too much, to be endured by some. To misrepresent my motives; to reprobate my politics; and to weaken the confidence which has been reposed in my administration—are objects which cannot be relinquished by those who, will be satisfied with nothing short of a change in our political System.” Washington’s statement was undoubtedly a reaction to the negative press he faced in final year of his presidency. He was scrutinized for issues such as the ratification of the 1794 Jay Treaty; Thomas Paine’s July 30, 1796 letter, which accused Washington of duplicity and misconduct; the deterioration of Franco-American relations; and the 1796 republication of seven spurious letters attributed to Washington that had first been published during the Revolutionary War.

Washington’s private letters also provided him with opportunities to demonstrate his literary and biblical erudition. For instance, when endeavoring to spur George Washington Parke Custis to perform acts of charity, Washington alluded to the biblical story, found in Mark 12:42-44 and Luke 21:2-4, of a poor widow who cast “two mites” into the treasury at the Temple at Jerusalem.5 In his letter to Custis of Nov. 28, 1796, Washington alluded to Iago’s speech in Act 3, Scene 3 of William Shakespeare’s Othello when he wrote: “And besides, to speak evil of any one, unless there is unequivocal proofs of their deserving it, is an injury for which there is no adequate reparation; for as Shakespear says—’he that robs me of my good name, enriches not himself, but renders me poor indeed’—or words to that effect.” These are only two examples of Washington’s frequent references to literary works and biblical passages in his private letters to friends and family.

Washington’s correspondence with Elizabeth Willing Powel in Presidential Series vol. 21 relates to the sale of his coach horses to her. However, because of his longstanding friendship with Powel, his writing, particularly in a letter dated Feb. 6, 17976, contains playful and witty language typically not found in the more formal, policy-oriented letters that he addressed to individuals like Alexander Hamilton. Washington wrote Powel: “As the Coach would be lonesome without the horses—and the horses might repine for want of their Coach (having been wedded together Seven years) you had better take both.”

While most letters in Presidential Series vol. 21 chronicle the significant issues affecting U.S. domestic and foreign policy, Washington found time to pen personal letters to family and friends, which provide readers not only with a glimpse into his character but also with a more profound understanding of the depth of his intellect. Washington’s instructions to his step-grandson reflect the significance he placed on moral conduct. His literary and biblical references reveal a Washington whom is rarely seen: a well-read, self-educated leader with a tremendous ability to appropriate his knowledge of literary texts for the education and improvement of his beloved family.