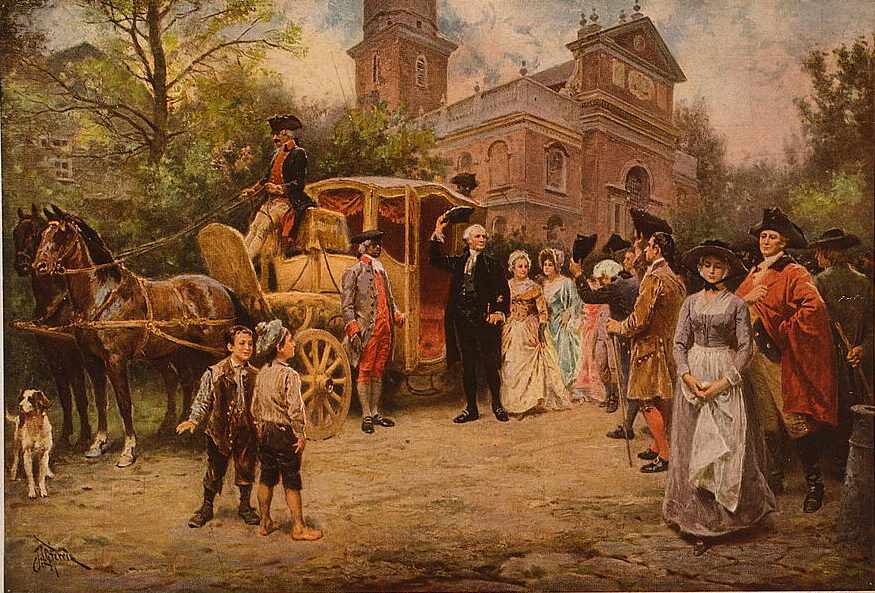 George Washington was a lifelong supporter of charitable causes, as evidenced by the hundreds of expenditures recorded in his ledgers for “Charity.”1 Even at the outset of the Revolutionary War, when a number of serious matters weighed heavily on Washington’s mind, he maintained an awareness of his duty to help the poor. He wrote his distant cousin and Mount Vernon farm manager Lund Washington in November 1775: “Let the Hospitality of the House, with respect to the Poor, be kept up; Let no one go hungry away . . . and I have no objection to your giving my money in Charity to the amount of Forty or Fifty pounds a year, when you think it well bestowd. What I mean by having no objection, is, that it is my desire that it should be done.” At the same time, Washington recommended that Lund observe frugal practices and consider the importance of savings, especially because he had refused to accept a salary for his service as commander-in-chief.2 Instances of Washington’s charitable giving became rather frequent by the end of his life; he even performed such acts while en route to Mount Vernon in March 1797, just after retiring from the presidency. An entry for March 15, 1797, in one cash account shows that the former president spent £81.13.7 in Pennsylvania currency for his expenses “from Phila. to Mt Vernon including servants and charity.”3  Near the end of his life, Washington donated money to the Alexandria poor relief committee, which distributed funds to widows, the sick, and others in need.4 Washington also provided funds to support academies, churches, and the education of orphans and contributed to subscriptions that funded, among other things, schools, publications, and fire victim relief.5

On one hand, these instances of charitable giving should come as no surprise. It was common for Virginia gentlemen to serve as patrons of benevolent societies and other enterprises. Charity, for some prosperous planters such as Washington, was tied to the concept of noblesse oblige, by which the wealthy had certain social obligations to those less fortunate. Moreover, as a vestryman of Truro Parish for a number of years, Washington would have helped to oversee relief for the poor. His longtime commitment to charitable causes and donations appears to have been grounded as well in his religious convictions and dedication to family. For instance, when his step-grandson George Washington Parke Custis embarked on what would be a brief college career at the College of New Jersey (now Princeton University) in late fall 1796, then-president George Washington wrote him a series of letters that offered fatherly advice on subjects such as virtue, friendship, and charity. In one letter, Washington instructed Custis: “Never let an indigent person ask, without receiving something, if you have the means; always recollecting in what light the widow’s mite was viewed.”6 Here, Washington’s emphasis on the importance of charity has a Biblical foundation, suggesting that his lifelong pursuit of charitable giving may have had religious underpinnings. The reference to the “widow’s mite,” which alludes to Mark 12:42-44 and Luke 21:2-4, relates the story of a poor widow who cast “two mites” into the treasury at the temple in Jerusalem. Jesus praised the widow’s donation because, unlike the wealthy who donated a small part of their riches, she gave away all the money she possessed. In another letter to Custis, Washington emphasized the religious basis for man’s duties and obligations, which undoubtedly encompassed charity, and counseled his step-grandson to adopt virtuous conduct. He specifically urged the young man to fulfill “those obligations which are enjoined by your Creator and due to his creatures.”7 Washington’s instruction to Custis reveals the former’s belief in a religious foundation for virtue, namely that God commands man to perform certain duties toward others. Washington practiced the advice he had imparted to his step-grandson to help the needy. During his presidency, he regularly directed staff of the presidential household to offer donations from his funds to strangers in Philadelphia who needed help. Recipients included “a distressed beggar,” a “poor widow whose daughter was blind,” and a “distressed negro sailor.”8

George Washington’s inclination to contribute to charitable causes appears to have stemmed not only from his religious beliefs, but also from feelings of obligation and commitment to family. Often, family members were recipients of his charitable disposition. To cite just two examples, Washington advanced funds for the education of his deceased brother Samuel’s sons, George Steptoe and Lawrence Augustine Washington, and regularly sent gifts and money to Samuel’s daughter Harriot Washington.

Finally, George Washington lived during the Age of Enlightenment, with its ubiquitous exhortation to virtue and philanthropy. Enlightened philosophers called on man to put an end to fantaticism of all kinds and to devote daily living to the betterment of society. As a result, charity, virtue, and tolerance became almost synonymous with Enlightenment. Washington was keenly aware that he was living during an “enlightened age” in which truth “triumphed over the power of bigotry.”9 He equated enlightenment with a moral and “free People.”10 Charity undoubtedly had a key role to play in the establishment of a people of morals and the promotion of the happiness of mankind.