Through history, people can share common experiences that connect them beyond the context of their time. First love is one of those experiences. Regardless of whether the memory of our first love remains obstructed by the pain of heartbreak, has left a bitter taste in our mouth, or is forevermore hidden in our secret garden, it has tainted us each in some way. George Washington, too, experienced that unique kind of love with Sarah Cary Fairfax (“Sally”) shortly before his lifelong communion with Martha Dandridge Custis began in 1759. 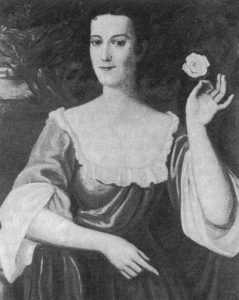 Historians interpret history just as much they study it, even where matters of the heart are concerned. One thing they have inferred almost unanimously concerning George Washington is the existence of a close relationship between him and Sally Fairfax, the wife of his close friend George William Fairfax. Despite the scant evidence, there is little doubt that Washington’s first love was Sally. Wishful thinking has led some historians to believe that the ambiguous relationship was far more than platonic, but there is no evidence supporting its consummation. I believe that George’s moral compass would not have allowed him to attempt anything beyond the realm of friendship, and certainly not after being bound to Martha by marriage.

Sally and George became close after George’s half-brother, Lawrence, died in 1752. They danced, played cards, and read to each other often. The attraction of the pair was undoubtedly both emotional and physical, one aspect not overpowering the other. Sally’s family was aristocratic while George came from a more modest background. In a sense, they completed each other. Given that George strived for social prestige and status, he saw in Sally everything that attracted him to the wealthy and educated Virginia families. Though it is difficult to say, perhaps George’s composure and colorful tales of war exploits are what drew Sally to him, inevitably distinguishing him from his counterparts. Or, like some have claimed, perhaps Sally was flirtatious with many of the young bachelors in her circle.

Modern romantics may remain skeptical that young George Washington let social conventions and his pragmatic nature forbid a life with his first love, or that the relationship was one-sided. Regardless of his apparent stoicism, George was capable of articulately expressing deep, raw emotions. As Joseph Ellis points out, writing to his beloved made George lose his usual rationality, and his use of cryptic language may have been a way of sheltering his secret infatuation from prying eyes.2 In a response to Sally’s letter congratulating him on his engagement to Miss Custis, his “emotional disarray”3 is apparent:

Tis true, I profess myself a Votary to Love–I acknowledge that a Lady is in the case–and further I confess that this Lady is known to you.–Yes Madam, as well as she is to one, who is too sensible for her Charms to deny the Power, whose influence he feels and must ever Submit to. I feel the force of her amiable beauties in recollection of a thousand tender passages that I coud wish to obliterate, till I am bid to revive them.4

My time at the Washington Papers has helped me understand George a bit better (we’re on a first name basis now), thanks to his voluminous correspondence as well as the ongoing knowledge shared by the editors who know him so well. However, it surprised me that a person who so regularly demonstrated restraint and self-control throughout his life was capable of writing such an impassioned letter. The sincerity of his feelings transpires in a way that would touch even the most cynical of readers, or at least I hope so. Alas, the reply to this letter, which could have shed light on the reciprocity of Sally’s feelings, has never been found. The same year, in one of his letters to Sally, George writes, “Do we still misunderstand the true meaning of each others Letters?”5 He follows this with an innocuous summary ranging from current events to military affairs. Perhaps this question would not be so enigmatic had its reply been found.

What I find the most endearing about Sally and George’s relationship is its enduring and intangible nature. George Washington never truly got over Sally. A year before his death, an unusually sentimental George expressed his everlasting affection in his last letter to Sally, which is filled with reminiscence:

During this period, so many important events have occurred, and such changes in men and things have taken place, as the compass of a letter would give you but an inadequate idea of. None of which events, however, nor all of them together, have been able to eradicate from my mind, the recollection of those happy moments—the happiest of my life—which I have enjoyed in your company.6

What about Martha in all this? I believe that George Washington was a true romantic at heart, even with Martha. Had she not burned most of their correspondence following his death, perhaps we would know a very different side of him. It is possible that the powerful feelings he felt for Sally were similar to those that would tie him to Martha for 40 years. Perhaps their letters went up in flames not only for the sake of privacy but also in order for Martha to preserve an image of her husband as hers only, sheltered from the world’s eyes, leaving us with the emblematic and impenetrable George that is so familiar to us today. At least, I’d like to imagine so.