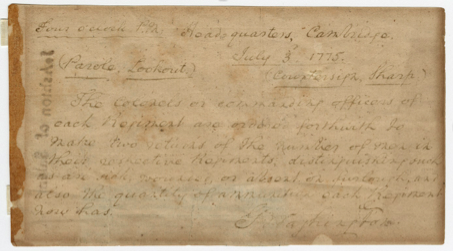 Among the special collections owned by the Fred W. Smith National Library for the Study of George Washington at Mount Vernon are nearly 500 documents written by George Washington. And not surprisingly, there are also some known forgeries, one of which is attributed to Robert Spring, and another of which is likely the work of Joseph Cosey.

This document (see image to right) was donated to the Mount Vernon Ladies’ Association in 1887 as a Washington manuscript. However, by the 1950s the library recognized that this was one of the most common forgeries created by Robert Spring. Several are known to exist, with slight variations, as can be seen in three photocopies of letters dated 13 January 1781, February 1781, and 6 May 1781. These are kept in the collection of the George Washington Papers at the Library of Congress.

Transcript of this letter: “To Jabez Huntington Esqr / Sheriff of the County of / Windham Connt / Sir / At the request of Selectmen of Norwich Sylvanus Cutler now in custody in the Gaol of sd County under Military order is hereby discharged and permitted to return home / Go: Washington / Given at Head Quarters / New Windsor / April 10th 1781”

Robert Spring (1813-1878) was born in England and came to the United States about 1845. Spring started as a bookseller, but when he acquired a cartload of waste paper at the sale of a Baltimore banking house he enlarged his profession. Among the waste paper were several checks written by George Washington, some correspondence from Washington relating to his banking activities, and a large amount of English manufactured blank paper. Spring began his forgery business by tracing the checks and correspondence, and after much practice succeeded in fabricating documents by free hand. Spring was first arrested for his actions in 1859 but was back to his routine by the next year, when he placed an advertisement in the Philadelphia Public Ledger on 27 January 1860, stating that he would give a “High price” for “Old BOOKS Law, Medical, Standard;” the volumes were both stock for his book store and a source of early American blank leaves to use for his forgeries.1

Spring was again arrested in 1869. The Philadelphia Inquirer, 3 March 1870, published an account of Spring’s trial “for obtaining by false pretenses a letter from the mails” using the alias Dr. James Hawley. According to the article, he “figured quite prominently in this country and in England in connection with the sham autographs of Washington which were foisted upon the public.” At the time of his detention, Spring informed the arresting detective that the Washington letter currently displayed in Independence Hall in Philadelphia was actually one of his forgeries. During Spring’s hearing several examples of his fabrications were produced, including three forged passes from headquarters during the Revolutionary War and one check from the discount bank at Baltimore. Spring reformed his ways when he left prison, but could not make an honest living and died in a Philadelphia charity ward.2

This document (see image to right) was donated to the Mount Vernon Ladies’ Association in 1992. It may be the work of Joseph Cosey, born Martin Coneely in Syracuse, New York in 1887. Cosey was a petty thief for years. He started forging historical documents in 1929, after stealing from the Library of Congress a 1786 pay warrant signed by Benjamin Franklin. He concocted a mix of iron fillings and brown ink to simulate the look of the iron-gall ink used in early America. Cosey became famed for his range of fabrications of prominent Americans, among whom was George Washington. He was convicted in 1937 and served less than a year in prison. Upon his release he continued to forge documents.3

Transcript of this letter: “Four o’clock P.M: Head-quarters, Cambridge. / July 3d, 1775. / (Parole, Lookout.) / (Countersign, Sharp.) / The colonels or commanding officers of each Regiment are ordered forthwith to make two returns of the number of men in their respective Regiments, distinguishing such as are sick, wounded, or absent on furlough, and also the quantity of ammunition each Regiment now has. / Go: Washington.”

Readers can compare the two forged signatures with a George Washington signature from 1779 (see below images) and see that although these were talented forgers, neither could quite replicate Washington’s slant, letter spacing, or flourishes.

To access the collections at the Fred W. Smith National Library for the Study of George Washington at Mount Vernon please contact their special collections librarian at fwslibrary@mountvernon.org or call 703-780-3600.