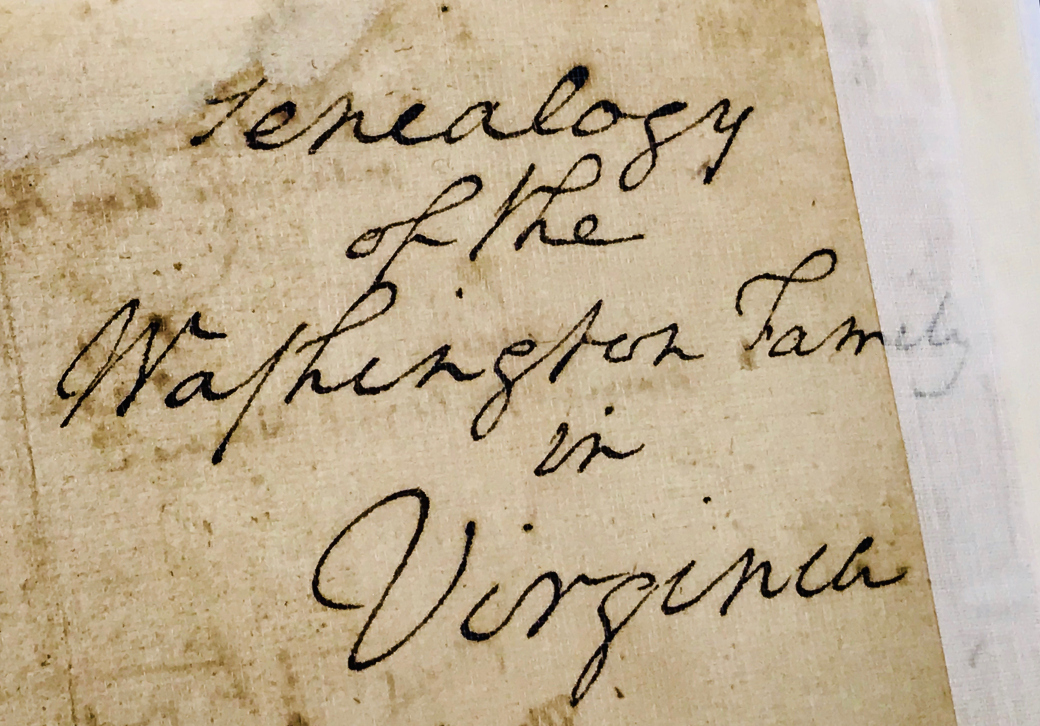 by Karin Wulf, Executive Director of the Omohundro Institute1 and Professor of History at William & Mary
July 26, 2019

Attached to a page in the first of nearly 300 red-leather-bound, near-atlas-sized folio volumes of the George Washington Papers at the Library of Congress (LOC) is a small manuscript that lays bare the foundation of 18th-century power and violence. Unfolded, the manuscript is approximately 7 ¼ by 9 ½ inches, but when folded into thirds, this lightweight rag paper presents as a neat 7- by 3-inch package.  The LOC catalog describes the manuscript as a “Genealogy Chart” and dates it to 1753.2 But this manuscript should actually have three dates, and none of them is 1753. And this manuscript is much more than a “Genealogy Chart.”

First, George Washington constructed a family tree, beginning with his great-grandparents John and Ann Pope Washington, down to his niece and nephews from his half-brother Lawrence Washington.3 George Washington penned this family tree between the early fall of 1748 and the fall of 1750, when he was between 16 and 18 years old. Then, on the reverse side, likely in early 1752, as he was just turning 20, he wrote “A List of Tithables,” an account of the enslaved people in Fairfax County, Va., on whom the Washingtons paid a tax.4 Likely in the early 1790s, George Washington labeled the document, along the folded top edge, as “Genealogy of the Washington Family in Virginia.” He would have kept it in the filing cubby-holes at the top of the bookcase that ran along one wall of his study at Mount Vernon, where he, famously careful with his papers, stored manuscripts “dating back to his adolescence.”5 Given the paucity of documents about George Washington’s youth, especially in his own handwriting during those years, this is an incredibly important document.6

Beyond providing a window into his early life, this manuscript contributes to a range of important subjects related to George Washington and the world he lived in and helped to shape. It is an extraordinary opportunity to see how the twinned powers of genealogy and inheritance systematically benefited one set of people and enslaved another. The particular contours of British-American-style genealogy, including inheritance and slavery, is the subject of the book I am finishing, and the reason why I have spent so much time with this Washington document. The document is also an important addition to all the known lists of Virginia tithables, and to the bibliography of information about people enslaved at Mount Vernon and other Washington properties. Except for Gabriel, all of the enslaved individuals on the tithables list—Acco, Ben, Franck, Oney, Jack, Judah, Nan, Moll, Will, and Judah—were also listed in Augustine Washington’s will, Lawrence Washington’s estate inventory, or documentation of estate distributions from the 1740s or early 1750s. This gives us one more precious point of reference in the lives of people who are little-documented and about whom we long to know more.

Given its obvious value, why would this document be excluded? Its significance may be apparent now, but it wasn’t before. Editors of previous eras have never seen items such as this as particularly important or revealing. But that is changing. As Jennifer Steenshorne, former director of The Washington Papers, has noted, “materials that were not considered important in the past… we [as historians] now recognize as containing valuable information. Account books, genealogies, dinner lists, inventories—all these materials contain rich information about the lives of people who might otherwise escape our notice. They give us evidence of how life was conducted.”

But why have so many scholars and editors—including the prodigious researchers at Mount Vernon documenting the experience of enslaved people—skipped over it? Some have clearly shared the views that Steenshorne and other editors have described: that documents like the Washington family genealogy were seen as merely domestic trivia, not pertinent to the powerful, public lives that men like Washington lived. Having worked on the history of genealogy for quite a long time now, I can assure readers that only recently has more interest developed in genealogy as a significant subject for historical research.

There is another answer, which explains why even the list of tithables was overlooked. It has to do with the way the document arrived and was cataloged at the Library of Congress. How it came to rest in the red volumes at the Library of Congress is part of the tangled tale of the Washington manuscripts. As careful as Washington was with his papers when he lived, their caretakers in the 19th century were decidedly less so. According to an introduction to one portion of the LOC Washington Papers, “what is most important in the story of Washington’s papers is not such natural processes as fire, flood, mildew, and the tendency of paper to fall into dust. Rather, there has been an overabundance of stewardship by misguided caretakers, persons who thought they knew what was important and what was trivial, what should be saved and what given away.” The excellent introduction to the 1964 LOC Washington Papers Microfilm Collection by Dorothy S. Eaton lays out the provenance of their materials from the papers’ disposition in the immediate aftermath of George Washington’s death; to Martha Washington’s burning of her husband’s letters; to heir Bushrod Washington’s cannibalization of manuscripts for Washington’s signature and handwriting for gifting purposes; to editor and John Marshall biographer Jared Sparks’s trunks, filled with Washington papers, sent to Richmond and Boston; to loans to Elizabeth Schuyler Hamilton of letters concerning her late husband, Alexander; and lastly, to Congressional authorization in 1834, and again in 1849, to purchase some of the papers for deposit at the State Department. It was not until 1904 that the Library of Congress finally became the primary repository of George Washington papers.7

Of course, the story doesn’t end there. At the Library of Congress, the Washington Papers were organized, cataloged, and “the arrangement perfected during the period 1960-63,” according to Eaton. The arrangement into eight series, organized by type of document, put this manuscript into series 4, “General Correspondence. 1697-1799.” This series contains “Letters sent and received by Washington, drafts of letters, military returns, and other documents. Chronologically arranged and alphabetized, within the day, by names of correspondents.” This document must have been included with other materials from the 1750s to have been placed between a letter of February 1753 about Washington’s desire for a position in the Virginia militia (a position his brother had held before his death in the summer of 1752) and a detachment report of Washington’s troops in late May 1754, just before the Jumonville Glen skirmish.

Could the “Genealogical Chart” have been buried among Washington’s papers in the Mount Vernon study cubby-hole alongside these other materials? Perhaps, but unlikely. It seems more likely that Washington filed the document with materials that he collected during the course of a 1790s correspondence about his family history. Besides, very little was not shuffled and mixed during the 19th century. In the interest of locating and preserving Washington’s diaries and letterbooks, the chronology of loose papers, in addition to the general disinterest in what were deemed domestic matters, was not a priority. In that context, a rough dating to the death of Lawrence Washington in 1752 may have made sense. The Library of Congress’ 20th-century cataloging then only included one side of this document. The “Genealogical Chart” was consigned to being ignored, and the list of tithables was made invisible.

Now for the good news. “What’s exciting about the digitization of editions—in [The Washington Papers’] case via Rotunda,” Steenshorne said, “is that [editors] can add materials to past volumes ([like the] Addendum project) and create new projects, such as the Washington Financial Papers project. Editions don’t just die on the shelf, but continue to grow and be repurposed with each new generation.” The “Genealogy of the Washington Family in Virginia,” poignantly draws our attention to the inheritance that made George Washington the master of Mount Vernon and that simultaneously made Acco, Ben, Franck, Gabriel, Jack, Judah, Moll, Nan, Oney, and Will vulnerable. It can now join other materials that more fully reveal their world and that of the Washingtons’.

1. The Omohundro Institute, an independent research organization sponsored by William & Mary, promotes scholarship relating to North America c.1450-1820 and related histories of the Caribbean and the Atlantic World. More information about the Omohundro Institute can be found here.
2. George Washington Papers, Series 4, General Correspondence: George Washington, Genealogy Chart, 1753, Manuscript/Mixed Material. https://www.loc.gov/item/mgw441968/.
3. George Washington’s nieces and nephews from his half-brother Lawrence did not survive past early childhood. Their birth and death dates, according to a genealogical record that George Washington created later in life, are as follows: Jane (1744-1745), Fairfax (1747-1747), Mildred (1748-1749), and Sarah (1750-c. 1752).
4. Key internal evidence for the dating of the document is the inclusion of Lawrence Washington’s third child, Mildred, born in late 1748, but not of his fourth child, Sarah, born in late 1750. On the Tithables list, the “Overseer,” William Ricksey, is a clue. He does not appear on any other known Washington-related documents, but his will was probated in Truro Parish of Fairfax County, Va., in early 1752—the same parish where George Washington’s father, Augustine Washington, was a vestryman and where George Washington would serve in the same capacity some decades later. That suggests that the alignment between the Augustine and Lawrence Washington estate papers and the names of the tithable men and women was not coincidental.
5. Kevin Hayes, George Washington, A Life in Books (New York, 2017), 16.
6. Lynn Price, managing editor of The Washington Family Papers and co-editor of the recently published Barbados diary of 1751-52, another of the few manuscripts from these early years, notes that she is “confident they were written by the same hand.”
7. More than 350 other libraries and archives have Washington papers that have been included in the editions of the Papers of George Washington.