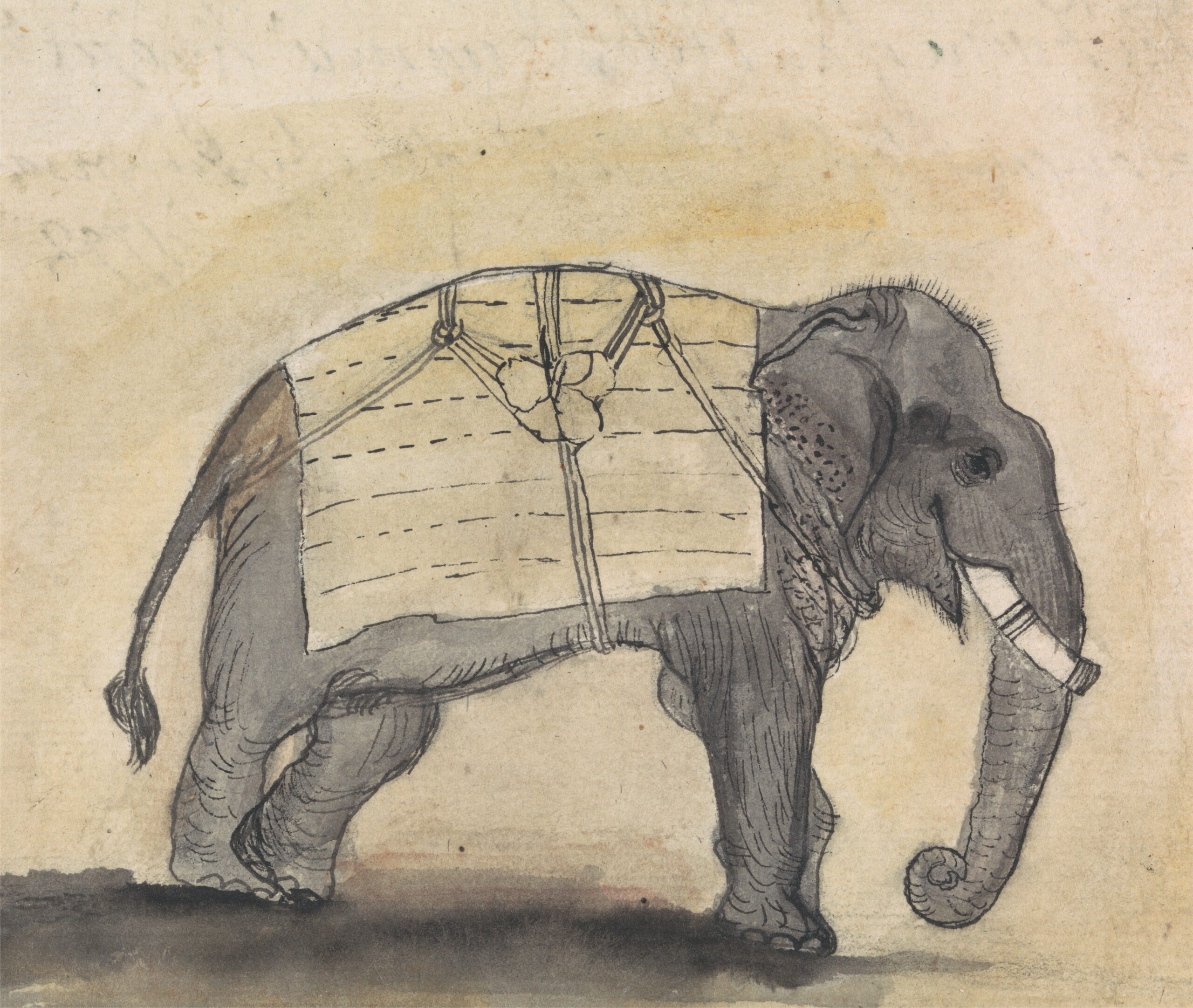 by Adrina Garbooshian-Huggins, Assistant Editor
May 28, 2021

George Washington had a fascination with exotic animals. As a result of a growing number of traveling entertainers and showmen who toured 18th-century America with unusual creatures, Washington, his family, and other members of the American public gained opportunities to experience animals native to other continents, such as elephants and camels. When word circulated about an upcoming event involving the display of an exotic animal, Washington often paid for himself and members of his household to attend the viewing. For instance, as early as January 1761, Washington spent 10 shillings to see a “Lyoness.”1 And in December 1787, Washington paid 18 shillings to a man who brought a camel from Alexandria, Va., to Mount Vernon “for a show.”2 Washington’s attendance at such displays, even during periods when he was absorbed in domestic or public business, or in presiding over the burgeoning new nation, demonstrates his keen interest in such animals.

Nowhere, perhaps, is Washington’s enthrallment with rare animals more evident than in the payments he made to view the same elephant on at least two separate occasions. The elephant, which arrived in the United States from India in the spring of 1796, was exhibited in a variety of cities across the U.S. from 1796 into the early nineteenth century. Philadelphia newspapers announced the elephant’s arrival in that city by July 30, 1796. One paper reported: “This surprising animal is arrived in this city on his way to Charleston. He is to be seen in High-street between Tenth and Eleventh streets, from six o’clock in the morning to Sunset.” Admission fees were “Half a Dollar” for adults and “a quarter of a Dollar” for children.3 On Aug. 25, 1796, a payment of $1.75 “for President &a to see Elephant” was recorded in Washington’s Presidential Household Financial Accounts.4 The payment amount suggests that Washington and one other adult—Martha Washington—attended the exhibit along with three youths, two of whom likely included Martha’s grandchildren Eleanor Parke Custis and George Washington Parke Custis. The third youth in attendance may have been 16-year-old George Washington Motier Lafayette, the marquis de Lafayette’s son, who had been living in the presidential household.5

Later that same year, the elephant again was exhibited in the nation’s capital. The Gazette of the United States, & Philadelphia Daily Advertiser for Nov. 8, 1796, printed an advertisement headlined: “The Elephant is returned from Baltimore.” According to the ad, the animal would be displayed daily between 8 a.m. and “sun down, in Market-street, No. 106, south side, between Third and Fourth streets.” The admission fee was twenty-five cents. Evening viewings also were available to the public at the price of fifty cents. Some members of the president’s household, and likely Washington himself, were among the spectators. Washington paid $3.50 on Nov. 16, 1796, “for family to see the Elephant.”6  Notably, Washington’s visits to the exhibit occurred during his final months as president, when he would have been heavily occupied with domestic and foreign relations issues such as heightened tensions between France and the United States, development of the Federal City, and federal appointments. Nevertheless, his interest in exotic animals prompted him to take leisurely breaks, even if very brief, in order to catch a glimpse of an elephant, a novel experience in America.

Newspaper accounts provide a wealth of information about the elephant Washington saw. One report, originating from New York on April 18, 1796, announced that the “America, Capt. Jacob Crowninshield, of Salem, Massa. commander and owner, has brought home an ELEPHANT, from Bengal, in perfect health. It is the first ever seen in America, and a very great curiosity. It is a female, two years old, and of a species that grows to an enormous size. This animal is sold for Ten Thousand Dollars, being supposed to be the greatest price ever given for an animal in Europe or America.”7 Captain Crowninshield had purchased the elephant for $450 in India as a speculation scheme and sold it in the United States for $10,000. One F. St. Mary claimed to be the animal’s owner when he wrote Martha Washington from Philadelphia on Dec. 17, 1796, asking her to support a charitable cause in which proceeds from the exhibition of the elephant would help victims of a fire in Savannah, Georgia.8 The elephant, described as “six feet and an half high” and reported to consume “all kinds of wine and spiritous liquors,” was first exhibited in New York City.9 The creature’s owner then trekked the animal to various American cities, where members of the public could view it for a fee. One account characterized the elephant, which was said to travel “at the rate of five miles an hour,” as “the greatest curiosity ever brought to this Continent.”10 Another account, shared from Stockbridge, Mass., on May 8, 1797, anticipated “a favourable reception” of the elephant at Boston. This second report undoubtedly sought to spark public interest by noting that the elephant “dances Yankee Doodle, with becoming grace.”11

George Washington’s lifelong interest in the exotic applied to animals and plants. His correspondence abounds with references to rare plants for his greenhouse, as well as exotic animals such as Chinese geese. So, it comes as no surprise that Washington was among the eager spectators at a never-before-seen elephant exhibit.