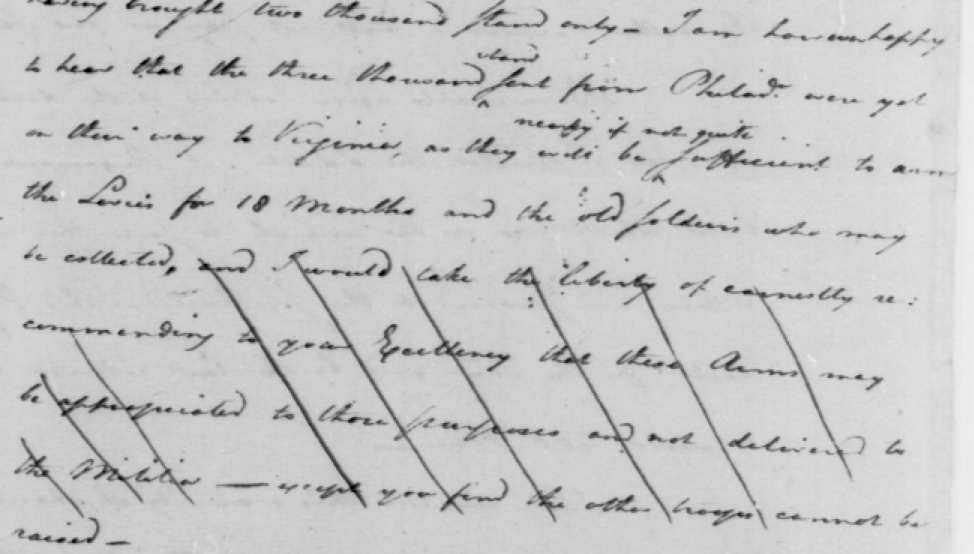 Due to the British invasions of Virginia in 1781, only one of the five letters that Gen. George Washington wrote Virginia governor Thomas Jefferson during the period comprising volume 28 of the Papers of George Washington‘s Revolutionary War Series (late August to late October 1780) has been found. Nevertheless, that letter and some of the drafts of the four missing letters reveal tension between pragmatists and purists among Patriot supporters of republican ideology, tension which became increasingly bitter and partisan after the American Revolution.

Almost all Patriots espoused republican ideology and consequently claimed to distrust “standing armies.” They opposed instituting these armies within republics because “regular” (professional) soldiers were supposedly mercenary and parasitical by nature: fighting for pay rather than patriotism, loyal to ambitious generals rather than to the public, and constantly draining resources from the citizenry. Some Patriots contended that republics should defend themselves not with temporary professional forces (let alone with permanent standing armies) but rather with armed citizens who would be productive civilians in peacetime and form militias during emergencies. In theory, the zeal of republican militia members fighting to protect their homes, independence, and liberty could never be equaled by regulars, who would be destined for defeat when invading a proper republic.

Washington accordingly wrote Jefferson in July 1779 about New England militia resisting raids by regulars in British service: “The Militia upon these occasions, considering their number and the sudden manner in which they assembled, behaved with great spirit.”1 Yet Washington undoubtedly preferred professional soldiers to militia, subordinating certain Patriot principles to pragmatic imperatives. When writing a circular letter to Jefferson and other governors on Oct. 18, 1780, Washington asserted:

[W]e have frequently heard the behaviour of the Militia extolled upon one & another occasion by men who judge only from the surface—by men who had particular views in misrepresenting—by visionary men, whose credulity easily swallows every vague story, in support of a favorite hypothesis. I solemnly declare I never was witness to a single instance, that can countenance an opinion of Militia or raw Troops being fit for the real business of fighting. I have found them useful as light Parties to skirmish in the woods—but incapable of making or sustaining a serious attack. This firmness is only acquired by habits of discipline and service.

Washington probably took Jefferson to be among the Patriots whom he criticized in that letter. The diplomatic general, however, hastened to conciliate such Patriots by adding: “I mean not to detract from the Merit of the Militia—their zeal & spirit upon a variety of occasions have entitled them to the highest applause, but it is of the greatest importance we should learn to estimate them rightly: we may expect every thing from ours, that Militia is capable of; but we must not expect from any; services for which Regulars alone are fit.”2

Drafts of letters Washington addressed exclusively to Jefferson during the autumn of 1780 suggest that Washington sought to maintain affable relations with the governor of Virginia by assuaging any potential fears on Jefferson’s part that the Continental army might later become a standing army. In one draft, dated Aug. 29, Washington observed:

I have the mortification to inform Your Excellency—that for several days past, the Army has been almost entirely destitute of meat—on some days without a mouthful—and has drawn the chief part it has had from the scanty supplies in the hands of the Inhabitants in the vicinity of it, who had been impoverished before. Those failures and these wants on our part blast almost every hope of successful operations in any case, and the latter produce a most licentious spirit in the soldiery. An Army should be well fed—well cloathed, and paid & then you may exact & expect almost any thing from it.

Tellingly, “well” is deleted before “paid.”3

Washington also refrained from denigrating militia when writing Jefferson in the autumn of 1780. Misinterpreting a sentence from Jefferson’s letter of Sept. 3 about arms bound for North Carolina, Washington noted in his reply drafted a week later: “I am however happy to hear that the three thousand stand sent from Philada were yet on their way to Virginia, as they will be nearly if not quite sufficient to arm the Levies for 18 Months and the old soldiers who may be collected.” The following words are then struck out: “and I would take the liberty of earnestly recommending to your Excellency that these Arms may be appropriated to those purposes and not delivered to the Militia—except you find the other troops cannot be raised.”4 In contrast, Washington wrote Continental brigadier general James Clinton in late October: “I have been informed a great number of Arms have been delivered at Albany—by whose Order, or to whom I know not—but presume they are in the hands of the Militia. . . I beg that every possible Means May be used to recover them to the Public; and no more be delivered to Militia.”5

By paying tactful respect to republican militia ideology when dealing with Jefferson, Washington mollified and moderated an influential proponent of that belief, who would later become president of the United States. Years later, in a May 1807 letter to Secretary of State James Madison, Jefferson still maintained that militia could match any feat performed by professionals:

[I am] convinced that a militia of all ages promiscuously are entirely useless for distant service, and that we never shall be safe until we have a selected corps for a year’s distant service at least, the classification of our militia is now the most essential thing the US. have to do. whether on Bonaparte’s plan, of making a class for very year between certain periods, or that recommended in my message, I do not know, but rather incline to his. the idea is not new, as you may remember we adopted it once in Virginia during the revolution, but abandoned it too soon. it is the real secret of Bonaparte’s success.6