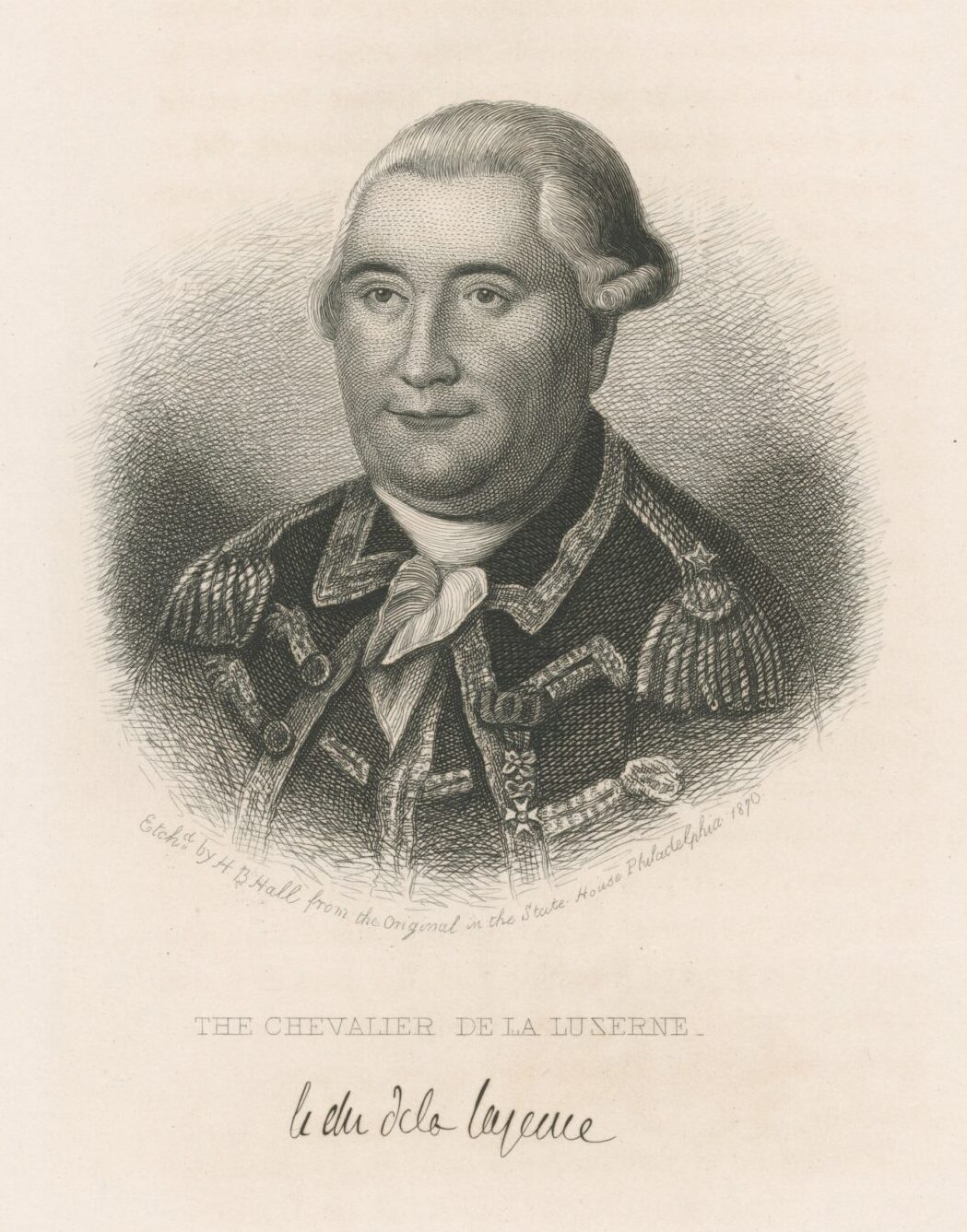 When Gen. George Washington learned in August 1779 that the French minister who recently had arrived in America, Ann-César chevalier de La Luzerne, would be traveling from Boston to Philadelphia, Washington made plans to receive him at West Point, N.Y., in fitting style.1 Maj. Caleb Gibbs, the commander of Washington’s guard, even wrote to a commissary at Philadelphia in an effort to obtain “sugar, Cheese, Coffee, Chocolate, &c.,” items of which Washington’s table was “destitute.”2 Washington hosted the French diplomat for three days in September. The events of the visit provide a case study in the effectiveness of the general’s diplomatic skills.

The Marquis de Barbé-Marbois, La Luzerne’s secretary, described their first meeting with Washington and their trip down the Hudson River:

In spite of all the objections of M. de la Luzerne, General Washington came to meet him at Fishkill. He received us with a noble, modest, and gentle urbanity and with that graciousness which seems to be the basis of his character. . . . We embarked with the General on the North River, or the Hudson, and sailed down it with the tide to West Point where the headquarters are, surrounded by the chief posts of the American army. The general held the tiller, and during a little squall which required skill and practice, proved to us that this work was no less known to him than are other bits of useful knowledge. The river lies between two steep banks covered with trees. . . . On the right, near to West Point, the mountains go back from the river a little and allow a space of about thirty arpents [about 120,000 square feet] where the tents of the general and the officers attached to him are placed. The divisions of the army are around this spot, on heights of which the summits are covered with forts and redoubts.

The dinner that Washington served the Frenchmen functioned as part of his diplomacy. “All the generals and the higher officers were there,” Marbois wrote.

It was interesting to see this meeting of these warriors, each of them a patriot renowned for some exploit, and this military meal, served in a tent in the midst of the apparatus of arms, in the heart of the former possessions of our enemies, to a French minister and officers, was to all of us a remarkable novelty. I had been seated near the general, and as he inspires confidence, after some general remarks we discussed interesting subjects fairly freely. He spoke of the fine behavior of my compatriots and of the glory which they had won in America. Everything around us was interesting to me. The river was being driven back by the tide, and the waves came right up to the tent-pins, where they broke with a solemn roar. A few steps away from us musicians played military and tuneful French airs. The banks and the forests of the mountain answered long to the cannon shots fired to the health of the King and Queen, and the opposite bank shone with the fires which the soldiers had lighted.

The next day Washington—who, as Barbé-Marbois noted, “wanted to conduct us himself”—led La Luzerne on an inspection tour of West Point’s newly expanded and strengthened fortifications. The party also observed the maneuvers of the army’s brigades with Barbé-Marbois commenting on the Continentals: “They had hardly any clothes, but were very well armed, and the men were strong and robust,” proving, he believed, “that you can make good soldiers out of recent levies.” That afternoon at four o’clock the party dined at the quarters of Brigadier General Duportail, a Frenchman and chief of the Continental army’s corps of engineers.3

Following this second dinner, Washington held a strategic planning conference with La Luzerne in which he showed the French that, with their aid, he was determined to take the offensive. The American general probed the minister about the possibility of another attempt at an allied offensive in North America. Referring to the French admiral expected to arrive on the American coast that summer, Washington informed La Luzerne: “That if Count D’Estaing could spare a detachment superior to the enemy’s naval force upon this Continent retaining such a force in the West Indies as would put it out of the enemy’s power to detach an equal force to this Continent without leaving themselves inferior in the Islands, the measure would have a high probability of many important and perhaps decisive advantages.” He concluded his remarks at the conference by observing that although with “the great uncertainty of the arrival of a Squadron,” he could not begin to “make expensive preparations for co-operating, nor pledge himself for doing it effectually.” But, Washington stated, “there was the greatest prospect of utility from the arrival of such a Squadron.” He promised “to do every thing in his power for improving its aid, if it should appear upon our coast” and that “if the present or future circumstances should permit His Excellency Count D’Estaing to concert a combined operation with the troops of these states against the enemy’s fleets and armies within these States he would be ready to promote the measure to the utmost of our resources and should have the highest hopes of its success.”4

At the conclusion of La Luzerne’s visit, Washington and “the chief officers of his army” escorted the French minister away from West Point, and Washington had two of his generals continue the escort across New York and New Jersey. Showing the success of Washington’s diplomacy, Barbé-Marbois, who himself later became French minister to the United States, commented, “I shall always recall with pleasure the time which I spent with that man who is so much to be respected.”5

Washington told Lafayette that he had received “great pleasure” from the visit of the two dignitaries and had “imbibed the most favourable impressions” of both men. He continued: “The Chevr till he had announced himself at Congress, did not choose to be received in his public character—If he had, except paying him Military honors, It was not my intention to depart from that plain & simple manner of living which accords with the real Interest & policy of Men struggling under every difficulty for the attainment of the most inestimable blessing of life—Liberty—the chevalier was polite enough to approve my principle, & condescended to appear pleased with our Spartan living—In a word he made us all exceeding happy by his affability and good humour, while he remained in Camp.”6 Washington’s diplomacy during this visit helped him establish the excellent relationship he maintained with La Luzerne for the duration of the French minister’s posting to the United States—a relationship that contributed to Franco-American victory in the war.