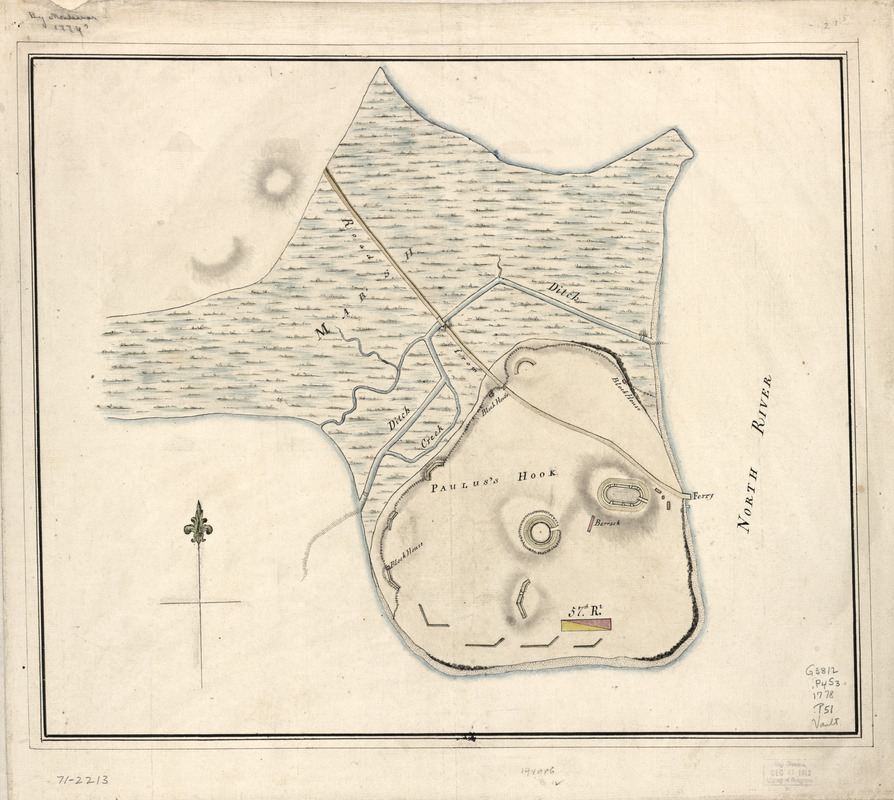 In this post, I continue the story of Maj. Henry Lee, Jr. and his partisan corps. In July 1779, Gen. George Washington, desiring to launch an offensive to counter British attacks on Connecticut sea coast towns, ordered Maj. Gen. Anthony Wayne to attack the British outpost at Stony Point, New York on the Hudson River with his light infantry corps. Wayne’s surprise attack succeeded brilliantly. (Read about the British attacks here and the attack on Stony Point here).

Washington followed the attack on Stony Point with a strike on the British outpost at Paulus Hook, New Jersey. This offensive, though smaller than the thrust against Stony Point, was particularly bold because Paulus Hook lies directly across the Hudson River from Manhattan Island, where the British maintained more than half a dozen regiments in garrison. The objective was not to seize the post, which the Americans could not hope to hold, but to embarrass the British by capturing the garrison.

The defensive works protecting Paulus Hook were so formidable that most observers thought them impregnable. Perhaps feeling that these strong defenses made a surprise attack impossible, the British command had put only a small garrison of provincials and second-line troops in the garrison, stiffened by a few regulars.

Lee was always on the look out for an opportunity to attack. Despite its strength, the fort at Paulus Hook presented him with one. During his scouting and espionage operations of the summer, Lee had learned that Paulus Hook was in a state of negligent security. That, if true, meant the fort could be surprised. Lee broached the topic of a surprise attack on the fort to Washington on July 28, and the general called Lee to headquarters to discuss plans. During their discussions, Washington gave Lee his general ideas of the manner in which the assault should be conducted, mentioned the precautions that Lee should take to disguise their intentions, and the methods to secure the march of the attacking troops. The general’s chief fear was the difficulty of the retreat because of the proximity of Paulus Hook to New York. Washington’s objective for the attack as he gave it to Lee was: “to surprise [the fort]—to bring off the garrison immediately—and to effect a secure retreat.”1

After a long march from New Bridge, N.J., Lee, commanding some 300 men, launched the attack at three in the morning of August 19. Lee achieved complete surprise. “So rapid was the movement of the troops,” he reported, “that we gained the Fort before the discharge of a single peice [sic] of Artillery.” Within the seeming space of only a few moments, most of the post was in American hands. One hundred and fifty-eight persons surrendered to Lee’s troops. Lee lost four men killed, three wounded, and seven captured. The post’s defenders lost, in addition to the captured, ten killed and two wounded. Though victorious, Lee decided that he must immediately order a retreat. The troops began the retreat about daybreak. Supported by another Continental army regiment and repelling pursuing British troops, Lee made good the retreat of his force to New Bridge, New Jersey. “Thus Sir was every attempt to cut off our Rear completely baffled,” he reported to Washington. “The troops arrived safe at the New Bridge with all the prisoners about 1 oClock P.M. on the 19th.”2 Lee received much praise for his leadership in the attack. Major General Greene believed the enterprise had been conducted with “great spirit.” He also “thought [it] to be more gallant than the Stoney Point [assault],” for though there were fewer men involved, because of the proximity of Paulus Hook to New York and the strength of the fort, Greene believed “the difficulties were much greater.” Greene continued: “The [Paulus Hook attack] was conducted with great spirit, and fortune favor’d it with success. The obstacles were so numerous that had not Major Lee been one of her favorite Children he must have faild. However he succeeded to the great joy of his friends.”3 Washington’s aide-de-camp Alexander Hamilton, writing to his friend and fellow aide-de-camp John Laurens, called the attack “a handsome stroke” and said of the attack’s commander: “Lee unfolds himself more and more to be an officer of great capacity, and if he had not a little spice of The Julius Caesar or Cromwell in him, he would be a very clever fellow.” Washington announced the success of Lee’s assault in the army’s general orders of August 22: “The Enterprise was executed with a distinguished degree of Address, Activity and Bravery and does great honor to Major Lee and to all the officers and men under his command who are requested to accept the General’s warmest thanks.”5 The news of Lee’s success helped raise American morale during a difficult year for the Continental army.