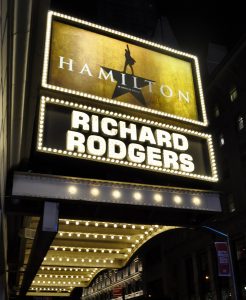 New York City’s Times Square starkly contrasts the small, quiet town of Charlottesville, Va., where The Washington Papers is based. Throngs of tourists pack the streets, performers vie for attention, and video advertisements overwhelm the eyes. In the midst of this sensory overload, an escape to a side street is a relief. Choose the correct street, and the Richard Rodgers Theater, the home of Hamilton the musical, will quickly appear on your left. Before you know it, you may find yourself humming a tune about Thomas Jefferson or quietly reciting George Washington‘s Farewell Address in a rhythmic fashion. A far-fetched scenario just a few years ago, Hamilton has catapulted revolutionary history into the stratosphere. In the words of one teenage fan, “This is, like, crazy cool.”1 And after recently attending a performance of the show, these documentary editors wholeheartedly agree.

Is Hamilton an academic, perfectly accurate historical interpretation? Of course not. But what it does do is use catchy tunes—and primary sources—to make history accessible and entertaining to a new generation of Americans. Washington’s 1796 Farewell Address is one such example. In “One Last Time,” Washington informs Hamilton that he will not be running for a third term as president because the nation is ready to move on. The president asks Hamilton to revise a draft of his address to the people in order to “teach them how to say goodbye” and to express his hopes for the new nation. In an impressive display of history reimagined, the resulting lyrics seldom deviate from the actual address. The following lyrics are drawn from the musical, with additional text from the historical address in brackets:

Consigned to oblivion, as myself must soon be to the mansions of rest . . . I anticipate with pleasing expectation that retreat in which I promise myself to realize [, without alloy,] the sweet enjoyment of partaking, in the midst of my fellow-citizens, the benign influence of good laws under a free government, the ever-favorite object of my heart, and the happy reward, as I trust, of our mutual cares, labors, and dangers.2

Hamilton ushers spectators through a veritable maze of laughter, sadness, excitement, and political intrigue. Hamilton creator Lin-Manual Miranda originally portrayed the character of Alexander Hamilton in the musical. Before Miranda (who is of Puerto Rican descent) brought Hamilton the historical figure to Broadway, most Americans likely did not know that the first secretary of the treasury was born in the West Indies. He was, in other words, an immigrant. It is doubtful that Americans considered the Federalist Papers, co-written by Hamilton, a captivating read. And in the story of the infamous Burr-Hamilton duel, Aaron Burr was not liable to receive a sympathetic assessment. Today, however, both Hamilton and Burr are starting to receive the attention and recognition they deserve—the former for being the mastermind behind the nation’s financial, legal, and political systems, and the latter for being a more nuanced and multifaceted figure than most history books acknowledge (not to mention an essential player in Hamilton’s short but intense life). While Hamilton is the namesake and star of the show, Burr remains its central figure. Not only does he narrate almost every song (the Hamilton song “Dear Theodosia” best exemplifies the more humanistic view of Burr), but the events often spiral around him.3 Leaving the theater with a new appreciation for the maligned figure known principally for killing Alexander Hamilton was only one of many delightful effects of an exceptional and inimitable Broadway experience.

In the development phase of his hit musical, Miranda extensively researched historical figures for context. This process included visiting the Hamilton Grange National Memorial, a journey that many of the show’s fans now repeat. If you were unaware that it was in the neighborhood, you would never guess that Hamilton’s estate, The Grange (his “sweet project” as he liked to call it), humbly stands a few blocks away from the campus of the City College of New York in Harlem.4 Other than a Hamilton Terrace street sign, there are no indications of the site’s presence as you stroll along West 141st Street. And yet, there it is: a charming yellow house, cozily surrounded by trees and what used to be bare land. Inside, the charm continues as visitors are encouraged to visit the house’s first floor, which consists of four rooms, most of which are incredibly luminous and welcoming. It is intriguing to visualize the house being moved—twice!—in the last 200 years in response to a growing city. Even as Hamilton’s old neighborhood becomes unrecognizable to his era, this piece of history remains.

It is difficult to dispute Hamilton‘s Schuyler sisters when they chant that New York is “the greatest city in the world.”5 One can only imagine how it must have felt for a young Alexander Hamilton, fresh off a ship from Nevis and arriving in a place of such excitement and opportunities. Perhaps some things don’t change over time. We arrived and left New York City with a “head full of fantasies” (and Hamilton songs on repeat).6

All photos courtesy of the authors.