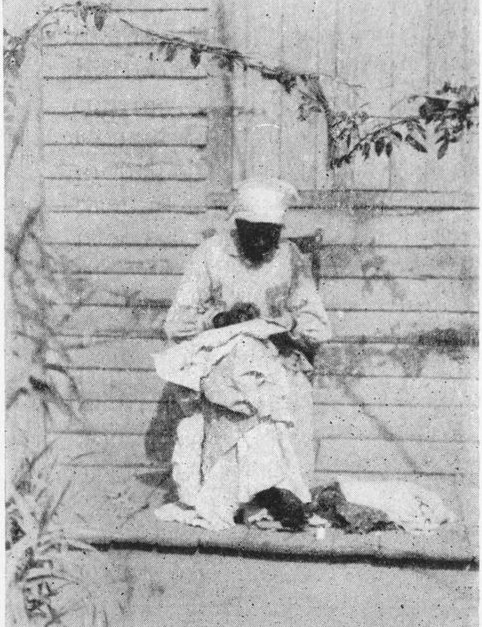 While transcribing one of Martha Washington’s letters, I was struck by a reference Martha made to an enslaved seamstress named Charlotte.

Those familiar with the history of slavery will probably know that not working, or working slowly, was a way enslaved people resisted their master’s control. Slaveholders tended to describe that behavior as laziness, and that description has left a stubborn, racist legacy.

Martha, very much the traditional plantation mistress, felt that supervision was required in any large staff, “but more so among blacks—many of whom will impose when they can do it.”2

I suspected Charlotte’s “indolence” might have been rebelliousness. Some digging into the papers of George Washington turned up documents that supported my suspicion.

Four years before Martha’s letter, Charlotte had an ugly altercation with a white woman in the streets of Alexandria. The woman thought that Charlotte’s gown was one that had been stolen from her two years earlier.

“My Wife wanted to take a nearer View of the Gown; but Mrs Charlotte, countenanced by another black Woman, to whom she appealed as a Lady of Character & Distinction, abused my Wife very grossly and threatened to beat her; nor would she demean herself so much as to be seen walking with such a Creature as my Wife […].”3

Charlotte’s behavior was profoundly dangerous for an enslaved person. The following account, written by Washington’s farm manager Anthony Whitting, shows some of the consequences of being an “impudent” slave.

“Charlotte I Guess will be reported Sick this week I Gave her a Whiping on Saturday & I find She dont intend to work in order I suppose to be even with Me When I was Culling out the River hogs she sent by Muddy hole David requesting I would Give her a Spear rib as She Long’d for it this I knew to be false and thought it to be a piece of impudence in her which She has a Great Share of I did not send it but on Saturday I sent one to each of the Women at the Qu[arte]r of Course She had one with the rest but She I fancy watch’d me home & as soon as I got in the house brings the Spear rib & thro’s down at the Door (affronted I suppose at my not sending it on Thursday) told me indeed She wanted none of my Meat & was in Short very impudent I took a hickory Switch which I rode with & Gave her a very Good Whiping She certainly could come for nothing else, On Monday Morning Mrs Ehlers informed me She had sent her work but Charlotte had sent it back I went to the Qur & Gave a little more but I believe She has not done any thing yet under a pretence of her finger receiving a blow & was Swelld She threatens me very much with informing Lady Washington when She comes home & says She has not been whipd for 14 Years past, but I fully expect I shall have to Give her some More of it before She will behave herself for I am determined to lower her Spirit or Skin her Back.”4

George Washington responded to this letter, writing “Your treatment of Charlotte was very proper—and if she, or any other—of the Servants will not do their duty by fair means—or are impertinent, correction (as the only alternative) must be administered.”5

For George Washington, keeping enslaved servants in line by punishing those who behaved in an “impertinent” way was in his interest. He was the master, they were the slaves. If he could not control them there was a chance they could revolt and escape.

From the slaves’ perspective, however, this brutality was dehumanizing. Charlotte left no documents, so her perspective must be deduced. But it is clear from her actions that she understood her position as a slave and chose to behave outside of those limitations. She worked at her own pace, wore a nice dress in public, and demanded meat from the farm manager. None of this behavior would be considered radical outside the context of slavery, but coming from Charlotte, it was both threatening and punishable.

For many slaves, being quiet and submissive was the wisest choice to navigate their environment. Charlotte (like the revolutionaries who fought against British tyranny) was clearly incapable of quiet submission to injustice. No matter how many times she was denied respect, she continued to demand it.

Charlotte’s resistance did not lead to a larger change, and as one of Martha Washington’s dower slaves, she was never freed. However, her “Spirit,” which Whitting tried so hard to break, was admirable.