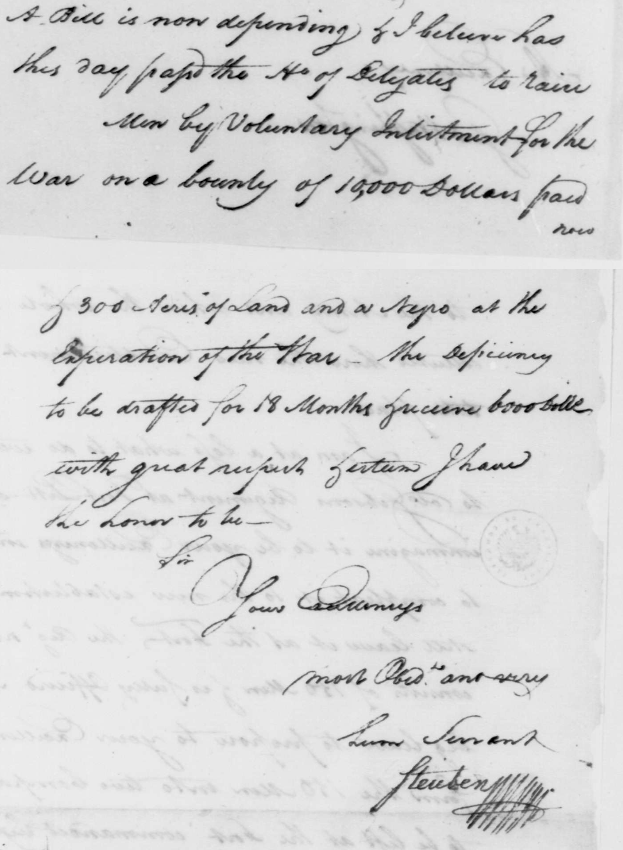 From early in the Revolutionary War, George Washington argued that soldiers enlisted for the duration of the conflict were better for the army than those who joined for annual or shorter terms. Reforming and retraining regiments and companies each year consumed scarce resources of all sorts and prevented the army from reaching a high degree of effectiveness, and even from being ready to fight when necessary. Amid the challenges and frustrations of a war that had gone on for more than five years, it came as an encouraging sign that Congress reorganized the Continental army in fall 1780 in a manner that emphasized the recruitment of soldiers for the war.1

To implement the new law, state governments passed new measures to entice recruits to commit for the long haul. In Virginia, fulfilling this aim took shape as a promise of “a healthy sound negro, between the ages of ten and thirty years, or sixty pounds in gold or silver, at the option of the soldier,” to any recruit who signed up for the war and served out that commitment faithfully.2 This incentive was part of a more comprehensive recruitment bill adopted on Jan. 1, 1781, after surprisingly little debate or contention. The legislation subsequently has not drawn much attention from historians, probably because the clause granting slaves to soldiers never was executed.3

The distant future meant little or nothing to Washington, who then worried about armies in the field and stabilizing the particularly bad military situation in the southern states. Maj. Gen. Nathanael Greene, whom Washington had selected to take charge of Continental forces in the southern department, had left Major General Steuben in Richmond to oversee efforts to improve tangled military matters in Virginia. In a long letter to Washington reporting that the finances, quartermaster department, magazines, and militia were “in the utmost confusion,” Steuben ventured the positive news that the legislature was close to passing a recruitment bill “to raise Men by Voluntary Inlistment for the War on a bounty of 10,000 Dollars paid now & 300 Acres of Land and a Negro at the Expiration of the War.” This observation concluded Steuben’s letter.4

In typical fashion for correspondence with subordinate generals, Washington responded promptly in a letter written between Jan. 9 and 11, 1781. He expressed his dismay over the confusion and waste that Steuben reported and went into some detail on the problems of ranking officers from Virginia in the reorganized regiments. Washington closed the letter with an update on the mutiny within the Pennsylvania line that had begun on Jan. 2. His response notably did not include any remarks on the recruiting bill.5

How is Washington’s silence to be interpreted? The question is especially apt because of his known enthusiasm for soldiers enlisted for the war. In her book on George Washington’s involvement with slavery at Mount Vernon, Mary V. Thompson argues persuasively that Washington’s bland acceptance of slavery steadily weakened throughout the war, primarily because of his constant exposure to “rhetoric about freedom and liberty.” Washington also heard antislavery arguments from “idealistic young men” who served him as aides-de-camp or trusted subordinates and saw black soldiers competently perform their duties.6 Washington’s silence in his reply to Steuben probably cloaked his growing doubts about slavery. Being thoughtful and reflective, Washington certainly saw the irony—or evil—of fighting for independence in order to keep, or put, blacks in bondage. Furthermore, Washington must have been aware that the vast majority of Virginia recruits, particularly at this stage of the war, had to come from families that did not own slaves. Granting slaves to such individuals only served to expand a practice that he considered increasingly dubious.

Of course, arguments can be advanced that Washington simply had too many other things on his mind to comment on the recruitment bill, or that he did not want to write something on a sensitive issue that could find its way into circulation and add to his already weighty burdens. I feel quite certain, however, that Steuben’s news raised Washington’s eyebrows and then furrowed his brow as he pondered the implications. Slavery had become an awkward reality for Washington, and he wrestled with that reality for the rest of his life. That he came to view the institution as wrong is suggested most strongly in the emancipation provisions of his July 1799 will, completed five months before he died.7