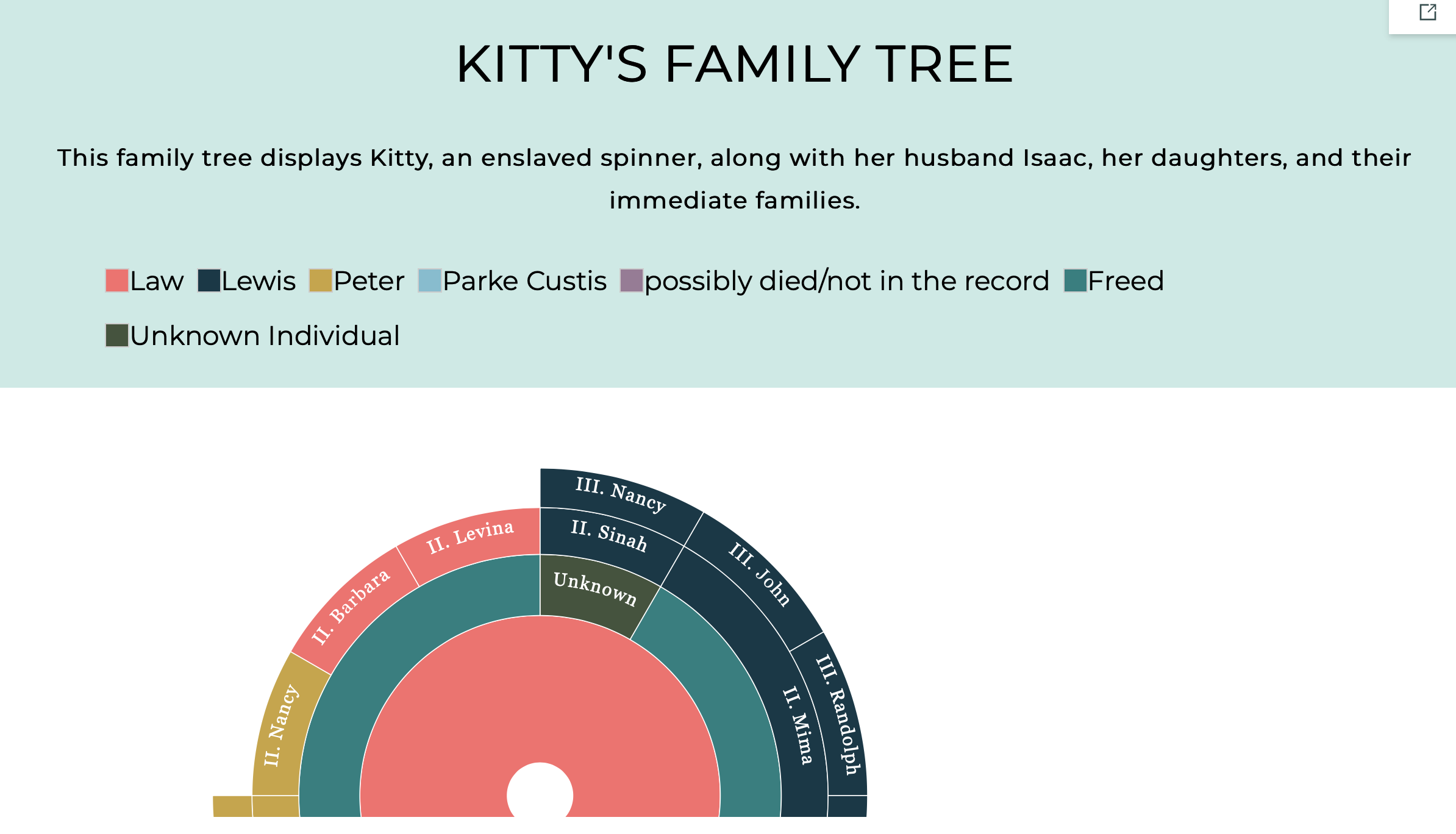 Kitty was a dairymaid and spinner who labored at Mount Vernon’s Mansion House farm for most of her life.1 She arrived at Mount Vernon after the marriage of George and Martha Washington in 1759. As a dower slave, she was part of the one-third share of the Custis estate given to Martha upon the death of her first husband, Daniel Parke Custis. Kitty’s community thus included individuals who were owned by George Washington, and those who had been enslaved on the Custis plantations. Around 1773-74, a year after her first daughter was born, Kitty married Isaac.2

Purchased in 1773 by George Washington from his cousin Robert Washington, Isaac was an essential laborer at Mount Vernon. He was also a head carpenter. His work included caring for hogs, managing the storehouse, and harvesting crops.3 In addition to these duties—which sometimes amounted to working for as many as 14 hours a day—Isaac found time to raise chickens and gather honey to sell to the Washington household for small amounts of money.4

Though much of their time and labor were stolen from them, Kitty and Isaac built a large family and community. Together they raised eight daughters, each of whom married and had children of their own.5 With such a large extended family, it is likely that Kitty and Isaac developed significant connections with other individuals in the enslaved community at Mount Vernon. Kitty and Isaac also probably developed relationships as a result of their work. Kitty labored with other spinners at the Mansion House farm, like Matilda and Annie, while Isaac labored with other enslaved men in his various roles across the plantation. Unfortunately, this community—which imaginably brought much-needed comfort and support to Kitty, Isaac, and their family—was not kept intact. With the death of Martha Washington in 1802, families and friendships were forcibly separated as a result of the legal division of the estate. The individuals owned by George Washington were freed, while those owned by the Custis estate were divided among Martha’s four grandchildren: Eleanor Lewis, Elizabeth Law, George Washington Parke Custis, and Martha Peter.6

To further illuminate the lives of Kitty and Isaac, I created a family tree (see figure 1, and see here for additional visualizations). The color assigned to each individual on the family tree describes their status of freedom in 1802: whether, like Isaac, they were freed, or whether, like Kitty, they were not. For those in the family who were still enslaved, the colors also describe to which household they were removed against their will. Thus, the family tree visually displays the geographic splintering of Isaac and Kitty’s family. Doubtless, this was an incredibly painful circumstance for the family. Isaac, the only member of his family who was freed, had no power to keep his wife and children together.

The history of Isaac and Kitty’s family was buried within archives and documents. Recovering the details of their lives required deciphering the connections between small facts recorded in George Washington’s letters, Mount Vernon and Custis family plantation records, and financial documents. After outlining and consolidating this research into a cohesive narrative, I used Oxygen XTML Editor to encode the data file behind the interactive family tree. Ultimately, as I thought about how to represent Kitty and Isaac’s family in both their unity and separation, I sought to highlight their strength and resilience, while also representing the oppression that stripped them of their self-determination.