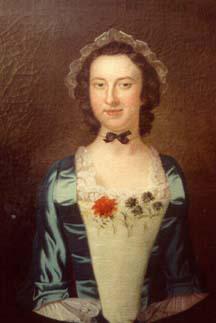 Earlier this year, as I was annotating documents for The Washington Papers’ upcoming Martha Washington volume, I came across a name that was unfamiliar to me: Janet Livingston Montgomery. I had heard of the wealthy and politically elite Livingston family of New York’s Hudson River Valley but not this particular Livingston. That’s what’s so great about annotating and research: you can learn about historical figures who are “new to you.” By working on the Martha Washington volume, I’ve stumbled upon the underrepresented voices of some fascinating 18th-century women. So, I’d like to now introduce (or re-introduce) you to Janet Livingston Montgomery.

Janet Livingston, born in 1743 (the same year as Thomas Jefferson) was the eldest child of Robert R. Livingston, Sr. and Margaret Beekman. Janet’s ten siblings included Robert R. Livingston, Jr., who served as delegate of the Continental Congress, secretary of foreign affairs, and chancellor of the state of New York.1 As chancellor, Livingston administered the presidential oath of office to George Washington in 1789.2

In 1773, Janet married the Irish-born Richard Montgomery, who became a brigadier general in the Continental Army.3 Montgomery left the British military for New York in 1772 when he was passed over for a promotion in rank.4 Janet first met Montgomery “many years before” the couple was married, when the ship carrying his regiment ran aground near the Livingston family’s estate, Clermont. Robert Sr. invited the officers to dinner, and the regiment sailed for Canada the following day.5

After they wed, Janet and Richard Montgomery moved to Rhinebeck, N.Y., where Richard hoped to become a gentleman farmer.6 Janet once remarked, “Ambition seemed to have no part of him.”7 Although he preferred a quiet, rural life, surrounded by his books and family, Richard was elected to the New York Provincial Congress in early 1775. He was then appointed brigadier general in the Continental Army in June 1775 and major general in December 1775.8

Montgomery wrote his wife many letters from Quebec, which the continentals were attempting to capture from the British.9 In a Dec. 18, 1775 letter, Montgomery told Janet that he wished to “sit by my own fireside.” He jokingly asked in the same letter, “Shall I recommend you for a Brigadier?” so that she could come to Quebec.10 On December 31, Richard died in battle.11

Janet Livingston Montgomery frequently visited George and Martha Washington in New York City during his first presidential term.12 When the former president died in 1799, Janet sent Martha a condolence letter, written on March 10, 1800. In her note, Janet stated that she could empathize with her friend, now that they were both widows. However, Janet, widowed unexpectedly at the age of 32, then constrasted the two women’s respective losses:

all the time I have Mourn’d for my lost Soldier you held yours in your Arms—Then what a consolation were you allowed! how favor’d, to be allowed to offer every suport to him—to kneel at his bedside to clasp has hand to catch his last words—­to close his eyes—to gaze at a loved face to you so dear and last of all to watch over his hearse & see him consigned to the grave of his fathers. Whilst she who writs to give you comfort Who shall console? for a Husband bleeding dieing, on the inclement field of Abraham <far>e from helps? <far>e from friends. dear Madam—forgive the next <my> wild immagination permits me to persist no further.13

Martha replied to Janet on April 5:

In 1818, the New York state legislature requested that Major General Montgomery’s remains, which were still in Canada, be moved to American soil.15 The body was transported down the Hudson River on a steamboat en route to its final resting place, St. Paul’s Churchyard in New York City.16 As the steamboat slowly passed Janet Livingston Montgomery’s residence, the now-elderly widow asked her companions to leave her alone on her riverside porch, where she peered at the vessel through a spyglass. In a letter to her niece, Janet wrote:

At length, they came by, with all that remained of a beloved husband, who left me in the bloom of manhood, a perfect being. Alas! how did he return! However gratifying to my heart, yet to my feelings every pang I felt was renewed. The pomp with which it was conducted added to my woe; when the steamboat passed with slow and solemn movement, stopping before my house, the troops under arms, the dead march from the muffled drum, the mournful music, the splendid coffin canopied with crape and crowned by plumes, you may conceive my anguish; I cannot describe it.17

Janet was so overcome with emotion that she fainted, and her companions found her unconscious on the ground when they returned to the porch.18

Janet Livingston died six years later in 1824 at the age of 85, having outlived her husband 53 years.19

My next blog post will explore how Janet Livingston Montgomery balanced traditional gender ideals and progressive notions of femininity in the early American republic.

*All efforts were taken to determine the rights information of this image. Appearing to be in the public domain, we publish it here. If you have any information regarding this image, please let us know.