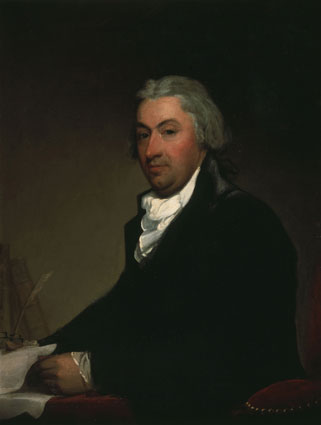 During the late colonial period, Americans’ opinions about women’s characters and intellects began to change. This transformation, combined with increased economic growth, led to the promotion of female education among the privileged classes. There now existed a demand for “ornamental ladies,” who could easily move within this “new culture of genteel sociability.”2 Janet Livingston Montgomery and her sisters were taught at home, were enthusiastic readers, and apparently knew French.3 Their educations prepared them for their new roles as ladies of culture and sophistication in the new American republic.

The education of women also ensured that their children would be infused with republican values.4 However, due to her husband’s death in December 1775 and her decision not to remarry, Janet Livingston Montgomery never became a mother, “traditionally regarded as her sex’s highest calling.”5 Janet considered her nephew (who died in 1815) as well as her youngest brother, Edward, to be her surrogate sons.6 She encouraged republican values and family pride in Edward by writing her memoirs, Reminiscenses, in 1820.7 Through Reminiscenses, Janet hoped to teach Edward (and other young relatives) about the Livingston family’s history and legacy, and “to provide him with worthy exemplars to emulate in the post-Revolutionary world.”8 I will explore Reminiscenses in a future blog post.

Sentimental portrayals of courtship, marriage, and widowhood also contributed to conventional gender ideals in the early American republic. While accounts of Janet’s courtship with and marriage to her husband, Richard Montgomery, certainly fit this mold,9 her widowhood, which I discussed in my earlier blog post, deserves particular mention. According to historian Cynthia A. Kierner, “[l]osing a husband in battle” cast Janet Livingston Montgomery as “a model of republican womanhood.”10 The North American and Daily Advertiser, a Philadelphia newspaper, paid tribute to the Widow Montgomery in 1840, at the dawn of the Victorian era:

The lady, of a character worthy of the Rome of the Scipios, had understood better than it was understood by the daughter of the Caeasars [sic] all that there is of dignity in the position of the wife who carries with her to the tomb a name illustrious and venerated by an entire nation. Left a widow when still young, she wore for a half a century her mouring [sic] for her soldier—(it was thus she always named him)—and threw off that attire of gloom only on the eve of the day on which, from the same abode from which she had last beheld him at his parting from her, full of life and hope, she saw passing before her on the Hudson, a steamboat which bore on its deck overshadowed by twenty star spangled banners the mortal remains of her husband.11

In addition to sentimentalizing her widowhood through the lens of the early American republic, this tribute also compares Janet to the matriarchs of the ancient Roman republic.

These idealized conceptions of women were cemented during the late colonial era and the American Revolution, and incorporated into the political culture of the new republic.12 The model republican woman was “a political being, selfless in patriotism, exemplary in virtue, nurturing and public spirited.”13 Her duties now included protecting her husband’s “patriotism and morality” and teaching her children to be “sober, industrious, and public-spirited” American citizens.14

Such integration of the private sphere of family and the public sphere of civic life justified women’s indirect, limited involvement in politics.15 In other words, the ideal republican woman “had a responsibility to the political scene, though not to act on it.”16 By focusing on domestic harmony and the nation’s collective good, republicanism could suppress individual female aspirations, including some women’s desire to directly participate in politics.17

Although not able to become a direct political participant, Janet Livingston Montgomery was able to subvert the expectations of limited female political engagement and convey a more progressive notion of femininity. She was politically knowledgeable, especially about the American Revolution, and she maintained a frequent correspondence with her brother Robert L. Livingston about politics.18

Janet also demonstrated political savvy and influence when, on several occasions, she visited President George Washington and his secretary Tobias Lear in New York City in 1789. During these meetings with Washington and Lear, she advocated for political appointments in the Treasury Department and on the Supreme Court for Robert.19 In an undated letter to Robert, Janet described in detail a specific visit with Lear. She assured her brother, “I am constantly at General Washington and am each time very kindly received.”20 However, Washington seems to have reacted uneasily to Janet’s assertiveness. According to historian George Dangerfield, “The President by this time must have become accustomed to resisting political pressure, but when it was exerted by the white hand of a lady, it became a matter of some delicacy and also (one ventures to think) of some irritation.”21

This blog post is the second of a two-part series on Janet Livingston Montgomery. You can read part one, about her life, here.