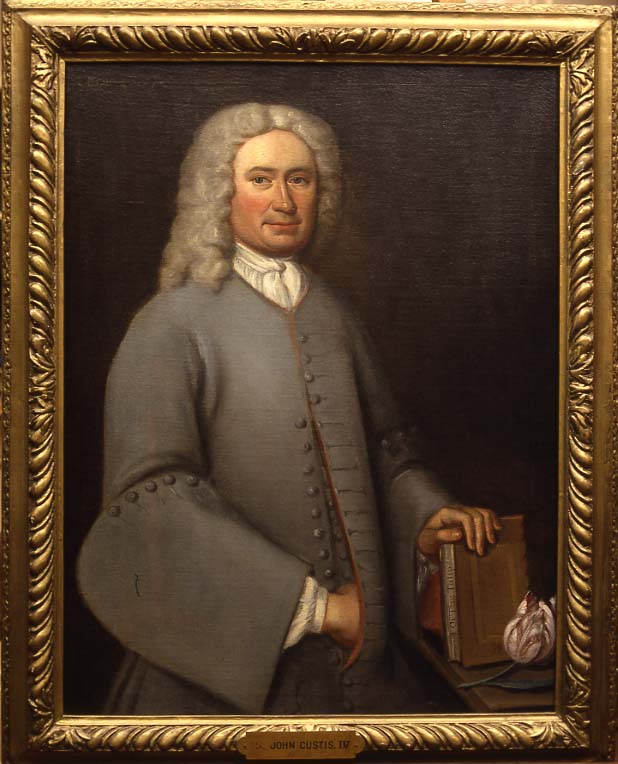 I would go to Law the whole Course of my Life; spend the last penny I have in the world rather than I will pay one farthing of your unjust and unreasonable demand; […] you may give me some trouble; and put me to some Charge; but depend on it; where you put me to one penny worth you will put your self to a pound…1

John Custis IV of Williamsburg, the man who wrote that sentence in the mid-1720s, has a reputation among historians of Colonial Virginia for his irascibility, stinginess, and business savvy. (Once, in an attempt to keep his tobacco price up, he argued that the white mold covering it was “a good sign and that Tobacco will keep.”2) So, it was only natural that Custis viewed anyone who wanted to marry into his family as a potential “gold-digger.” The fact that Martha Dandridge (later Martha Custis, finally Martha Washington) was able to talk her way into the Custis family is something of a miracle.

John Custis’s own marriage had been famously miserable. In an apocryphal story, he once drove a carriage bearing him and his wife Frances Parke right into the Chesapeake Bay. The following exchange is said to have taken place:

“Where are you going, Mr. Custis?” Frances asked, with the water swirling around them.

“Drive on,” said Frances, “any place is better than Arlington.”3

In 1714, the couple’s fighting led them to draw up legal Articles of Agreement, which still survive. The Articles included a promise not to call each other “vile names or use any language of oath but behave themselves to each other as becomes a good husband and wife.”4

Custis’s tombstone impressively insults both his wife and their children.  It reads that while he died at 71, he only lived “but seven years which was the space of time he kept Batchelors house at Arlington […] This inscription put on the stone by his own positive orders”5

Bitter tombstone aside, while alive, Custis’s letters revealed concern over the well-being of all of his children, including a child he fathered with an enslaved woman named Alice. In a letter to his son Daniel Parke Custis, he wrote, “my dear black boy Jack [is] [manuscript mutilated] sick; wch make me very melancholly; and if please God [h]e [manuscript mutilated] should do otherwise than well, I am sure I should soon follow him; it would break my heart, and bring my grey hairs with sorrow to the grave my lif being wrapt up in his.”6 Jack, unlike the rest of Custis’s slaves, was freed, and included in his father’s will with the promise “that he be handsomely maintained out of the profits of my estate given him.”7

John Custis was wary of any attempts to marry into the family after what he described as “villanous usage” by a man who proposed to his daughter in 1731, only to back out when Custis refused to pay him £3000. Custis noted he “never so much as inquired into [the suitor’s] circumstances; for wch I believe all that know me, must Judge I was not in my right senses”8

Daniel, John Custis’s eldest son, had attempted to court two different women before meeting Martha Dandridge, only to have his father refuse to give his consent to an engagement with Martha for various shaky reasons.9

The Dandridge family was respectable but, as John Custis noted, “much inferior in point of fortune.”10 Apparently, Custis had initially supported the marriage but then changed his mind, which led Daniel to complain about his father’s “fickleness.”11

Martha ended up taking the matter into her own hands. She met John Custis with a lawyer named James Power present. Power wrote to Daniel:

he [John Custis] Heartily and Willingly consents to your marriage with Miss Dandridge That he has so good a Character of her That he had rather you shou’d have her than any lady in Virginia Nay if Possible he is as much enamoured with her Character as you are with her Person and this is owning Chiefly to a prudent speech of her own. Hurry down immediately for fear he should change the strong inclination he has to your marrying directly.12

Martha’s speech must have been impressive to change the mind of a man who, according to one source, would rather throw away his silver than allow “a daughter of John Dandridge to have them.”13 Much of the Custis fortune later became George Washington’s after he married Martha, causing this clash of wills to have a greater impact on American history than one might expect.