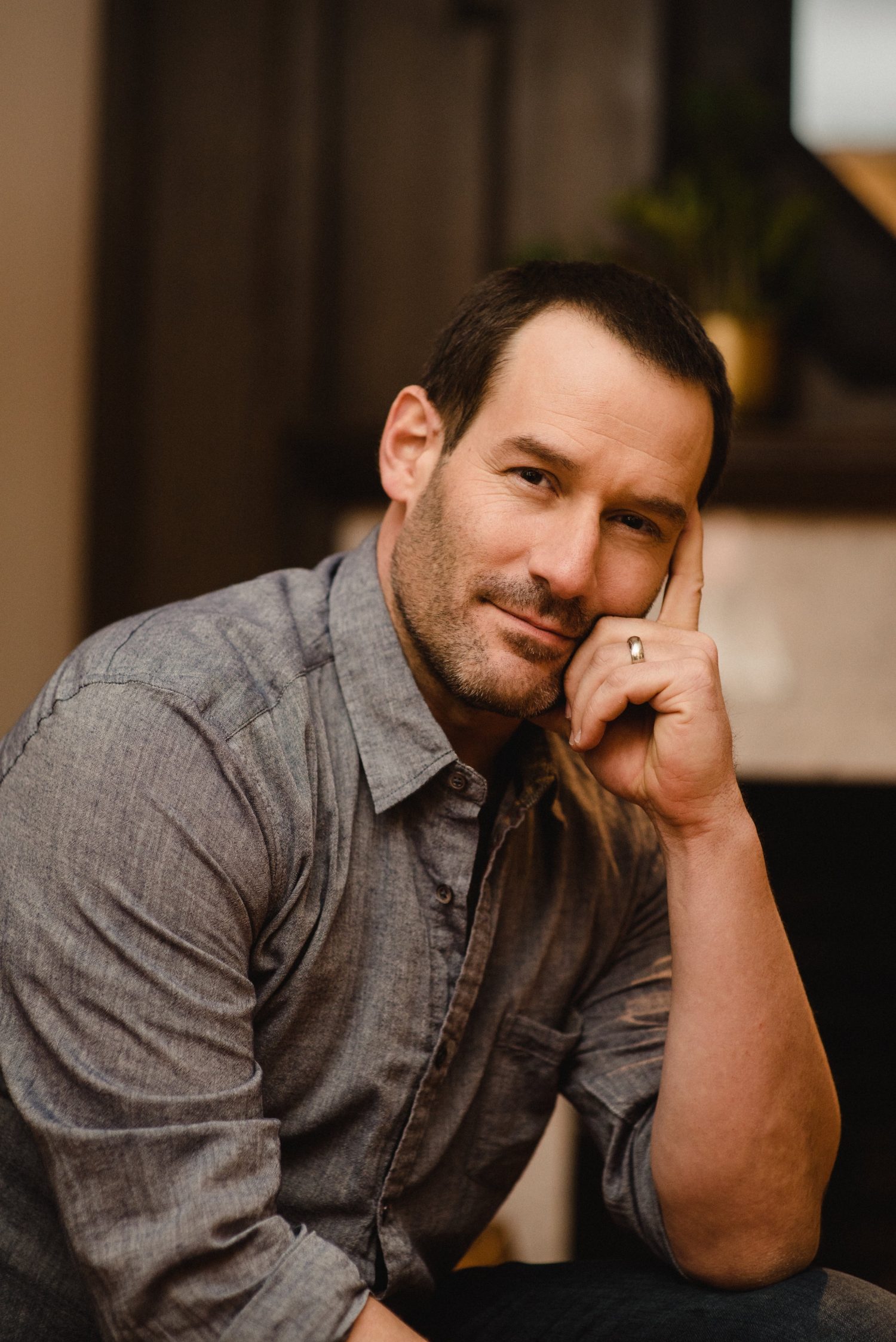 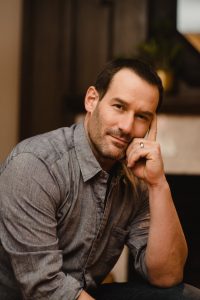 Ian Kahn knows George Washington. For three seasons, he has played the General on the AMC television series Turn: Washington’s Spies. An accomplished stage actor, Kahn has also appeared on Dawson’s Creek and Sex and the City. Washington Papers editors Kim Curtis and Lynn Price recently spoke with Kahn about his work on Turn, what this season holds in store, and what George Washington means to him.

When he initially heard about the role of General Washington on Turn, Kahn says, “I thought how wild and wacky it was to play George Washington, but then I read the character description… and I thought, ‘I think I’ve got an idea about how to do this.’” As Kahn began working on the script during his first audition, his hopes were confirmed that he could indeed figure out how to play someone like Washington.

For his callback after that first audition, the producers of Turn sent Kahn some historical research, which helped him to better comprehend Washington as a person. According to Kahn, “Research is a great tool for me or for any actor because it can really spark your imagination to understand what’s really going on.” Once Kahn won the role of Washington, he embarked on further preparation. Daniel Shippey, founder of the Breed’s Hill Institute, became a mentor to the newly minted General. Kahn also read Joseph Ellis’s His Excellency and Ron Chernow’s Washington: A Life. “What I learned was that [Washington] wasn’t just this statue of a man,” says Kahn. “But he was a real person who had real challenges and real insecurities, and that opened a lot of doors for me.”

George Washington has been the subject of intense historical research for more than two centuries; however, there are still aspects of the man that remain unknowable. The sound of Washington’s voice, for instance, may always remain a mystery. During the show’s audition process, Turn’s producers specifically requested actors to use an accent somewhere between a modern-day English accent and an American accent. Kahn took this directive a step further and surmised that Washington would have taken on a bit of a British officer’s sound, since as a young man Washington emulated British officers in his efforts to become one. Kahn also thought that Washington would speak quietly due to his childhood pleurisy (which resulted in a loss of lung power), his desire to have people lean in to better hear him, and his self-conscious need to hide his teeth due to his dental issues. Kahn hopes that these “building blocks” add up to a “regal tone” and “rich sound.” 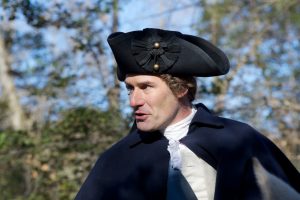 Turn’s location shooting in and around Virginia’s Richmond and Williamsburg areas also helps Kahn unlock the importance of Washington and his era. “Being by Colonial Williamsburg, going to [Patrick Henry’s] Scotchtown … was very valuable to me to sort of get a feel for the time period,” says Kahn. “There are times when I look around … and understand what it is that we were fighting for.”

As with most film and television portrayals of history, the question of how to properly balance historical accuracy with dramatic license remains on the minds of artists and audience alike. However, Kahn believes that “dramatic license on television can be fair.” For example, last season’s Valley Forge episode, in which Washington played a major part, polarized Turn’s audience because it showed Washington full of self-doubt and vulnerability. “I think that [the episode] was allegorical in a lot of ways to give some understanding of how challenging that time was,” says Kahn. “We could have done an episode perhaps showing soldiers and their dismay, but what I think the creators of the show wanted to do was have it go through the eyes of Washington.”

More importantly, Kahn believes the Valley Forge episode showed that Washington was much more than a statue:

If you look around New York, there are statues of George Washington all over the city… Streets are named after him. Colleges, states, and the capital. What [the episode] showed was the frailty of the man and the challenges that he faced. Did it happen exactly like that? No, probably not… but we don’t know what was going on inside of his heart or inside of his mind.

A recent episode of Turn that aired on May 30 (Memorial Day) has continued the season-long exploration of Benedict Arnold’s treason and Arnold’s relationship with Washington. According to Kahn, when he first began researching Arnold, he didn’t know who Arnold was as a person or understand the complexity of the situation. Kahn also didn’t realize how important Arnold was to the patriots’ cause; he just saw Arnold as a traitor. However, learning more about Arnold altered Kahn’s perspective: “I have great compassion for Arnold because I don’t think he would have done what he did had he known the folly of his choice. It makes me sad for him and his memory.” 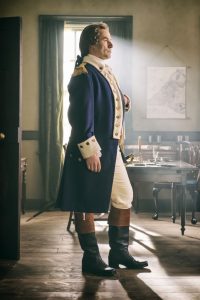 Viewers were also introduced to a new character during the Memorial Day episode: Washington’s wife, Martha. In the episode, General and Mrs. Washington attend a ball, scenes for which Kahn had to take dance lessons. Kahn believes that “[Martha Washington] was a source of great comfort for [Washington] during these years.”

When speaking to Kahn about Washington and Turn, it is easy to be struck by the actor’s deep reverence and admiration for his character; Kahn always refers to Washington as “General Washington” or “The General,” never “George.” “I always thought of him as the man on the dollar bill, and I didn’t really understand everything that he did,” says Kahn. “Little things like being president of the Constitutional Convention and the choice to sit there through every moment of it. That seems so small, but it’s so huge because he set the tone for the nation in every way with the choices he made.”

Kahn sees playing George Washington on Turn as a huge but worthwhile responsibility:

This passion for Washington’s committed leadership and bravery led Kahn to write an op-ed piece for the Huffington Post, in which he calls for U.S. leaders, especially in this presidential election, to look to George Washington for guidance. Kahn remembers the conversation with CNN Political Commentator Hilary Rosen that led to his writing the op-ed. He says he told Rosen, “If the country, if the political world would think about George Washington every day, they would make better choices for the country as a whole as opposed to just their individual parties. And if General Washington were alive today, I believe that that’s what he would be calling for.”

Portraying the General has led Kahn to a deeper and richer understanding of George Washington as a leader, as a military general, and as a man. This newfound appreciation has led Kahn to place the first president as the ideal example for the present. “If our country had leaders like George Washington today,” he says, “we would be in better stead.” 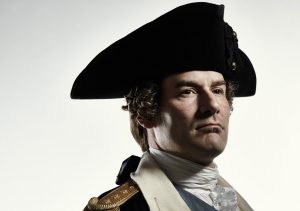 Thank you to Ian Kahn and Washington Papers Research Editor Caitlin Conley for their contributions to this interview. Photos courtesy of Ian Kahn.

4 thoughts on “Lessons in Courage and Responsibility: Ian Kahn of Turn: Washington’s Spies”