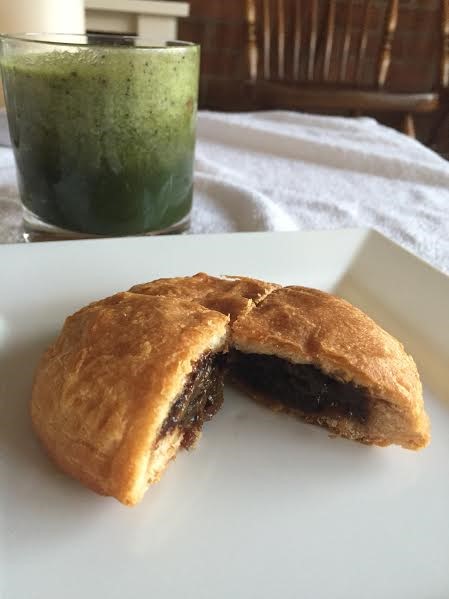 During my search for documents and letters relating to Martha Washington, I’ve stumbled upon numerous interesting articles. One of the most attention-grabbing pieces was a short recipe for “lettis tart.” The article was published in 1906, under the “Domestic Science in Household” column in the Omaha World Herald. The recipe itself came from Martha’s cookbook, which safely resides at the Pennsylvania Historical Society.

To begin, I had to wonder – what exactly is “lettis”? I assumed it simply was “lettuce” misspelled, but when I googled “lettis” to confirm my hunch, I found a blog post about a modern attempt at the recipe. I was not surprised to find that it was written by a former intern at the Historical Society of Pennsylvania.1 The post broke the recipe down to an understandable guide for a modern cook—a significant improvement from the short instruction in the 1906 article. It also identified “lettis” as iceberg lettuce. Though a little research suggests that iceberg didn’t exist in Martha’s time, the post was all I had to go on, and by this time  curiosity had gotten the best of me, so I added the ingredients to my grocery list. I was excited to try the recipe, but my enthusiasm quickly wavered when I remembered an important truth.

I am not an avid baker. Not even an adequate one. My skills extend to toasting sandwich bread and popping pre-made cookie dough in the oven. So, even though the lettis tart seemed to be an achievable challenge, I hesitated. Pressing my lips together and letting out a deep sigh, I started baking. I boiled the lettuce, melted the butter, and scowled at the prunes. (I don’t like prunes!) I even remembered to preheat the oven—a step that I have been known to forget. Despite all odds, I had a pretty good feeling about the tarts when I gently placed them in the oven. 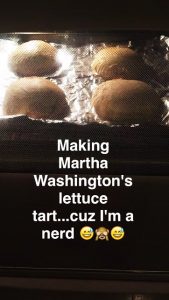 As the pastries grew into their glorious forms and filled the kitchen with sweetness, I sent photos to my friends, updating them on my newest history-inspired activity. An acute awareness of my nerdiness crept up on me. “This is for research,” I comforted myself. I received a variety of responses. My friends were confused as to what lettis tarts were and what on earth I was thinking when I decided to make them. One friend could barely express her confusion over my strange behavior, so she sent me a sighing emoji instead. Another simply replied, “why…?”

Honestly? I wanted to learn more about Martha through a hands-on experiment, and the thought of lettuce for dessert intrigued the “foodie” in me. While modern foodies desperately seek the newest and healthiest ingredients, colonial housewives had to get creative with what they had on hand. Martha and her first mother-in-law, Mrs. Custis, clearly accomplished that. I applaud the originality of the dish, but I wonder how Martha’s family felt about it. Did Patsy and Jack Custis pout and roll their eyes when the tart appeared on the dining table, realizing they were about to eat vegetables for dessert? Or did they giddily hop around when the sweet smell of buttery prune filled their nostrils? What about General Washington? Did he close his eyes before every bite, focusing on tasting the combination of cooked lettuce and chewy prunes? 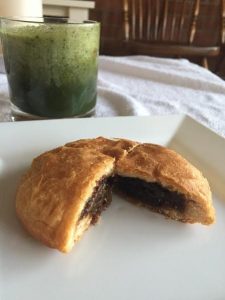 After removing the tarts from the oven and letting them cool, I eyed my modern kitchen, a room in which I typically have no desire to spend time unless I’m hungry. For my favorite First Lady, however, the feeling was probably different. Mrs. Washington may have enjoyed being in her kitchen, sharing in the action and aromas of the treats being prepared. Though neither she nor her slaves had access to the very tools, foods, and comforts I have today, I still wished to witness her kitchen in action. I would have liked to observe the stout little lady swiftly maneuver her way around, smiling, perhaps humming as she participated in the preparation of food for her family. At least I can try to get to know her by recreating her recipe, and tasting (our best guess at) what she tasted.

Pairing the lettis tart with a green smoothie, I felt proud of myself for accomplishing such a domestic task. The tart was soft, gooey, and slightly chewy. I expected this amalgam of texture, but what surprised me the most was how well the lettuce complemented the prunes instead of overpowering the sweetness. Martha’s lettis tart was delicious, and fortunately, guilty-free! I was surprised with the result. I not only gained a fascinating recipe to wow (or scare) my friends, but I also learned to appreciate the convenient technologies in my everyday life. Trying out this obscure recipe was a treat in and of itself. I can’t wait to discover another clue that offers a glimpse into her life.