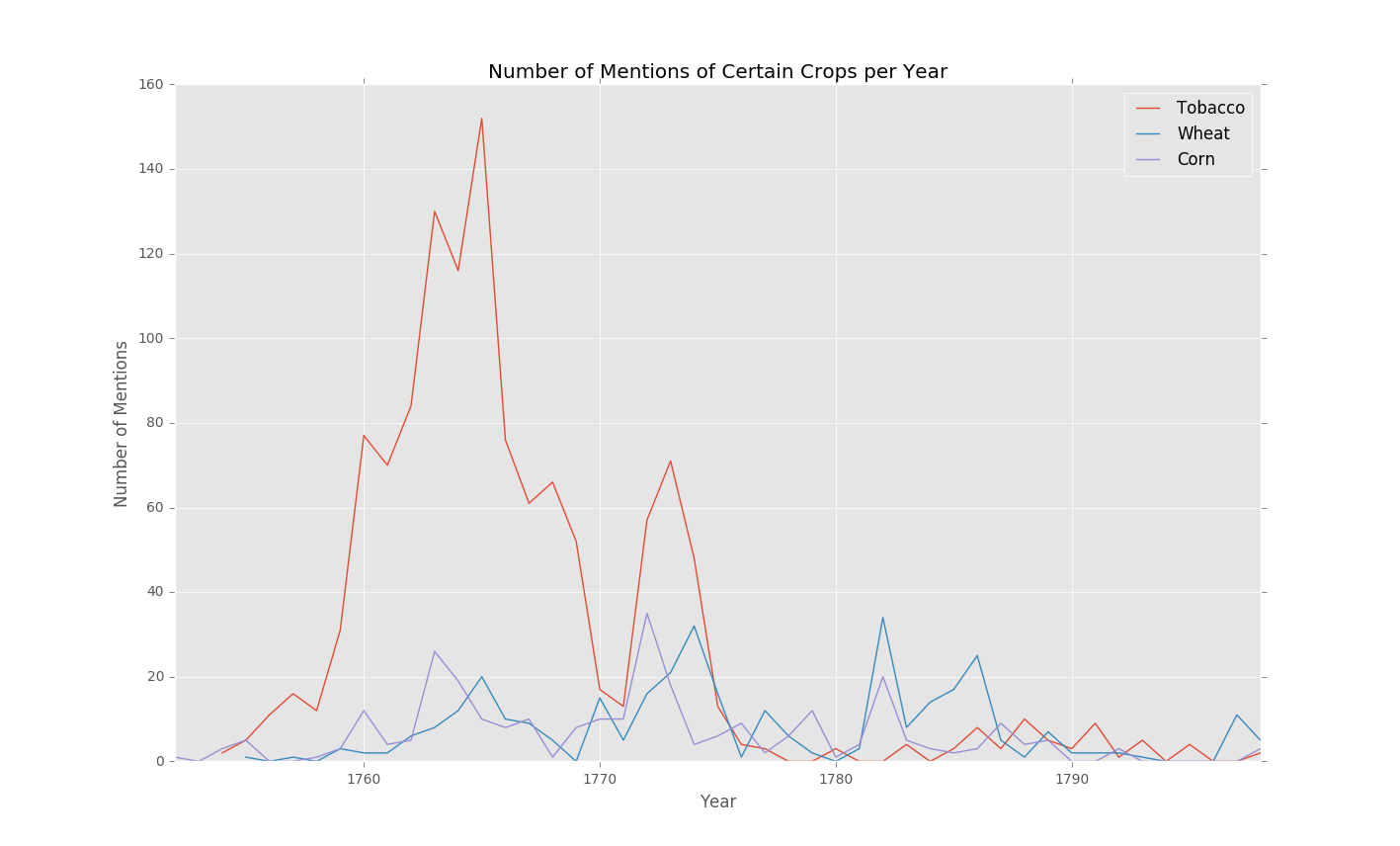 As a student analyst for The Washington Papers, I have the opportunity to work on a variety of interesting tasks. One of these tasks includes figuring out how to make George Washington’s documents more accessible to the public.

For Washington’s financial records, this is especially important. While the records detail Washington’s purchases, and thus his belongings, it is difficult to gain deeper meaning from the records in their raw form. We could look at each document line-by-line—discovering that Washington bought twenty bushels of corn one day in 1790 and then sold four pounds of beef the next—but we do not gain any broad historical insight from such information. In order to see meaningful patterns and trends, we must look at the data as a whole.

So, knowing Washington had a passion for farming, I began by examining his ledgers and general account books for trends in the agricultural data. Because Washington was meticulous in everything he did, plenty of information was available in his accounts: what he sold/bought, how much each transaction cost, etc. Picking three crops I often saw when doing transcriptions (tobacco, wheat, and corn), I searched for and collected all mentions of these crops in the records. I then downloaded this list and plotted the number of mentions of each crop in a given year. It is important to note that by focusing on the number of mentions of each crop, rather than the units in each of those transactions (that is, each time corn is mentioned, rather than the number of bushels of corn), the resulting visualizations represent the transactional frequency of these crops, not the volume of their output.

Ah, finally some high-level patterns! Initially, we see that the frequencies for mentions of these crops are in synchronicity. This probably means the peaks were years of good harvest, and the valleys years of bad harvest. We also see evidence for the common assertion that tobacco was colonial Virginia’s major cash crop: where wheat and corn top out around 30 mentions a year, tobacco peaks at 150! As a result, it appears that tobacco was Washington’s most popular product, and wheat his second. Following this insight, I was interested to see how these mentions varied according to month. Was it possible that certain months saw more mentions than the rest? Using statistical computing, I created a few visualizations to help us see.

Looks like our inquiry was well placed! We see that wheat was mentioned more often in the winter and that its additional mentions were scattered consistently throughout the year. This makes sense, as wheat was a dietary staple in colonial Virginia, bought and sold year-round. The same goes for corn: we see peaks in the summer months but regular mentions throughout the rest of the year as well.

Tobacco, however, is more interesting. We see a massive peak in June. Moreover, summer contains the bulk of its mentions. Why the difference? The seasons for marketing the crops were different. Tobacco was mainly a summer product, whereas the wheat and corn were yearlong staples. Emily Hudson-Arns, a research associate at the College of Agricultural Sciences at Colorado State University, confirmed this assessment. She explained that tobacco could not be stored for long periods, unlike wheat or corn. As a result, tobacco had to be sold shortly after its harvest, which occurred mainly in the summer.

Special thanks to Emily Hudson-Arns, who promptly and graciously answered my questions.

1. “I think with you that the life of a Husbandman of all others, is the most delectable. It is honorable—It is amusing—and with Judicious management, it is profitable. To see plants rise from the Earth and flourish by the superior skill, and bounty of the labouror fills a contemplative mind with ideas which are more easy to be conceived than expressed.” From George Washington to Alexander Spotswood, 13 February 1788, Founders Online, National Archives, last modified December 28, 2016, http://founders.archives.gov/documents/Washington/04-06-02-0092.