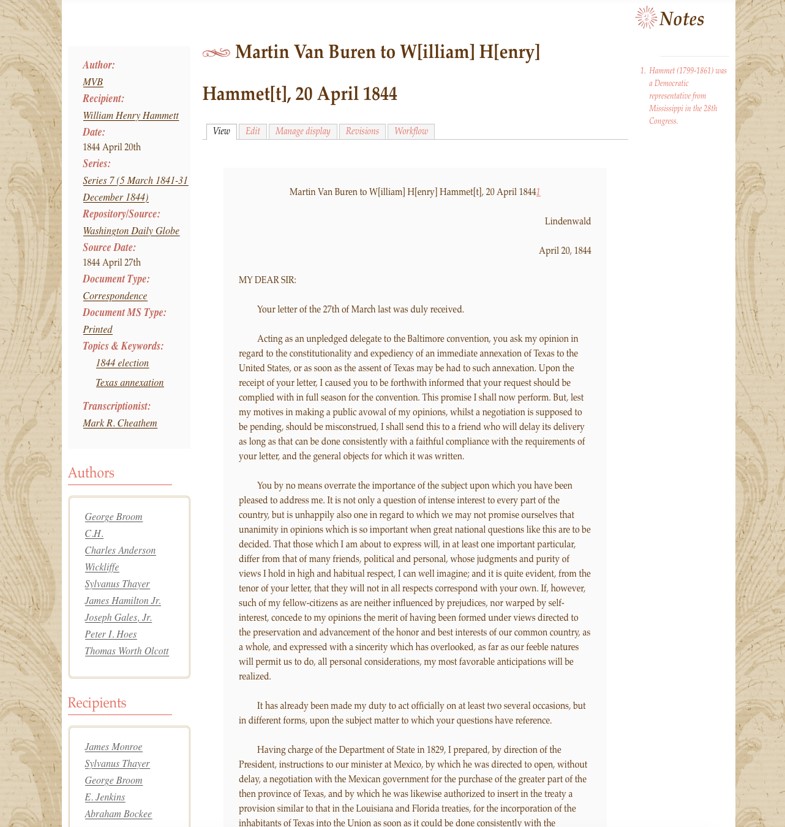 Digital publication remains a challenge for many documentary editing projects, especially when dealing with complex documents such as farm reports, financial records, and ship logs. Traditionally, editors have relied upon TEI-based solutions (an XML format for humanities projects), often omitting those more complicated documents and focusing instead on correspondence, speeches, and diary entries. Beyond that, these TEI-encoded documents need additional work. The documents need to be transformed from TEI into another code and then a custom publication environment needs to be developed. As a result, many projects struggle to use that model as a solution without external support. In order to address this issue, the Center for Digital Editing (CDE) has turned toward the open-source content management system Drupal.

Drupal is a freely available, open-source content management system. Its flexibility has allowed for the creation of diverse websites, including weather.com, fema.gov, university websites, and e-commerce sites. While it has a steep learning curve compared to other content management systems, it can be fully customized, giving users complete control over the types of metadata captured, defining relationships between content, displaying content, and developing user interaction. These features make Drupal ideal for digital humanities projects, such as digital documentary editions.

At its core, Drupal is written in PHP (a server-side scripting language) and uses MySQL (an open source relational database) to store its content. Customizations are then introduced with the installation of modules, which extend core functionality, and themes in order to modify site appearance. Conveniently, Drupal’s active user and developer community has contributed code, modules, and themes useful for digital documentary editions and other scholarly projects. These modules thus alleviate the need for projects to create custom code and significantly reduces the amount of “code” maintenance on the site. Module updates are fairly easy to install, too. (Those familiar with WordPress will find these updates to be similar to the process of using and updating plugins.)

For the CDE, these modules have allowed us to capture various types of metadata, develop an editorial interface, manage document workflow, and create a digital edition for both traditional types of documents and the more complex ones. Let’s look at our work in creating a user-friendly editorial apparatus.

So far, we have created fields for capturing metadata and the various elements of a transcribed document including dateline, salutation, body text, closing, and signature. Using these fields has made it easier to digitally transcribe documents as well as standardize their formatting. Moreover, by fielding each aspect, it is easier to export documents in various formats: they can be printed as PDFs, exported as Word documents, CSV files, or even mapped to XML schemas like TEI.

Another feature we have customized is the WYSIWYG or text editor. For many Drupal users, the standard WYSIWYG editor works well enough as is, making it easy to bold, italicize, underline, strikethrough, and superscript text, as well as list items. But documentary editors often need to do more than that. For some, it is important to apply small caps, indent the text, align bits of text left and right, or even replicate marginalia written sideways. While it is possible to enter the HTML and CSS by hand to implement this formatting, editors frequently are not familiar enough with HTML and CSS to do so. Such high-level customizations would also make it difficult for students to significantly contribute to these editions. Minor customizations to the WYSIWYG editor style sheet that are shared between Drupal installations, however, make it easy for editors and students to edit text as needed.

Drupal also simplifies the management of document workflow and the tracking of editorial changes. In order to do this, we have incorporated a couple of modules. One of these includes the Workflow module, an installation that allows for the creation of a customized document workflow. Using this module, we can create stages tailored to individual projects, identify the number of documents in a particular stage, and define which users can move a document from one stage to the next. Additionally, we can see who has done what and when, create a search interface to find documents in a particular stage, establish a student work portfolio, and bulk-publish groups of documents based on their stage.

Another module allows us to see versions and changes made to a document or other record, such as an identification. For ease of document management, each version of a record includes information about the date and user. Additionally, versions can be compared side-by-side, making it possible to tell what was changed. This feature is particularly useful when dealing with difficult-to-read words and transcriptions, as well as when drafting identifications.

For many projects, capturing metadata, completing editorial work, and managing the documents are all performed in an environment separate from the publication platform. With Drupal, however, we are able to digitally publish documents in the same environment in which the materials are prepared. Any number of documents or transcriptions can be published at the click of a button, and information need only be captured one time in order to create multiple, dynamic displays of the content, such as timelines, maps, and other site-generated visualizations. As we continue to advance, we can also look for ways to engage more with the public user.