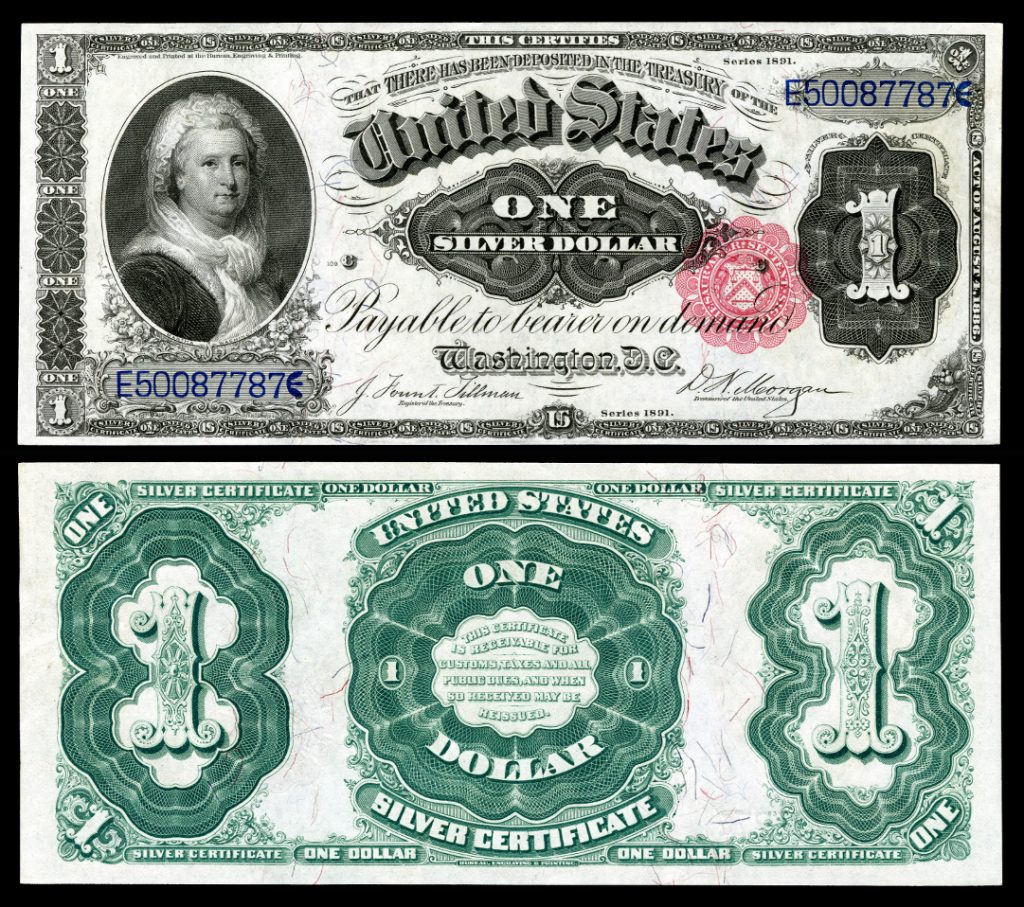 The U.S. Department of the Treasury sparked controversy in 2016 when it announced plans to place Harriet Tubman on the front of the twenty-dollar bill in 2020. Earlier this summer, the department postponed the bill’s release to 2028.1 When the redesign finally takes place, Tubman will be the first woman on U.S. paper currency since 1886, when Martha Washington appeared on the one-dollar silver certificate. As an editor of the papers of Martha Washington, I was curious about the history of the Martha Washington dollar. Did her image inspire as much debate as Tubman’s?

An important distinction between the Martha Washington certificate and the Harriet Tubman bill is that Martha Washington’s likeness did not replace the image of any other historical figure on the currency. In 2016, advocates of Andrew Jackson were offended that a depiction of Harriet Tubman might replace him. Martha appeared on a completely new, very popular, small-denomination silver certificate.

In fact, the most controversial aspect of Martha’s certificate was what role the new dollar was going to play in the “Silver Craze” of the late 1880s. After the Civil War, the federal government attempted to replace its bimetal currency system (a system in which the value of money is derived from both silver and gold) to the gold standard. In 1873, Congress passed the U.S. Coinage Act, which only allowed the free coinage of gold, not silver. This caused deflation, and the prices of goods went down. While this might seem like a good thing for consumers, farmers, who saw the prices of their crops dip, and debtors, who found it harder to repay their debts, were furious.2

Advocates for “free silver” demanded that the government bring back bimetallism. In 1878, the Bland-Allison Act, a compromise made with the increasingly vocal pro-silver group, obligated the government to purchase at least two million dollars’ worth of silver at market value every month and to coin it into silver dollars.3 The arguments of pro-silver Democrats sound like arguments heard in Congress today. William Jennings Bryan described the silver issue as between “the idle holders of idle capital” and “the struggling masses, who produce the wealth and pay the taxes of the country.”4 The 1886 decision to print small-denomination silver certificates was a victory for silver advocates because it would increase the circulation of money tied to silver. So, while the certificates were in fact quite controversial, the outcry was not because of Martha Washington.

Newspapers of the time did call attention to the design of the certificate, stating that it was “a question of great public interest,” and reported that they “will have a clear white background to indicate their peculiar character while the backs will be green, after the style of the United States notes. In the center of the dollar certificates will be a vignette of Martha Washington…”5 The Wheeling Register in West Virginia reported that the new bills would be “the Handsomest Ever Issued.”6

The decision to honor Martha Washington in this way was seen as notable, if not particularly controversial. The Internal Revenue Record and Customs Journal reported that the certificate was “an innovation” as “only the likenesses of men” had been used on currency up to that point.7 The Woman’s Journal of Boston, next to an advertisement for a corset called the “Emancipation Waist,” specifically called “the attention of suffragists” to the Martha Washington dollar note. They observed that “she is, we believe, the first woman that has been distinguished in this manner.”8 Actually, Pocahontas was the first real, non-symbolic woman to appear on U.S. paper money.9

Not everyone appreciated the certificate’s depiction of Martha Washington. In his 1887 article, published in The Cosmopolitan magazine, Frank G. Carpenter wrote, “I don’t think her pictures, as engraved upon the new one-dollar silver certificates, give the proper idea of her. The bust there displayed evidently represents a very tall woman […] the truth seems to be that she was, in her latter days, short and dumpy rather than tall and symmetrically shaped.”10 Aside from the superficial appearance of Martha Washington, however, it seems Carpenter did not have any objections to featuring a woman on currency.

In the end, the Martha Washington silver certificate was not as controversial as the Harriet Tubman twenty-dollar bill—and unsurprisngly so. Despite being a slaveholder, Martha Washington, to many Americans, serves as a fairly uncontentious symbol of U.S. womanhood. Tubman, who broke U.S. laws in order to free enslaved people, still, for many, does not.

In 1886, the year that the Martha Washington silver certificate came into being, Harriet Tubman worked with author Sarah H. Bradford to publish her second biography. Bradford argued that Tubman’s “name deserves to be handed down to posterity, side by side with the names of Jeanne D’Arc, Grace Darling, and Florence Nightingale…”11 Perhaps, before the 2028 promised release of the Tubman twenty-dollar bill, Americans will come up with a different way to honor this particular American hero.