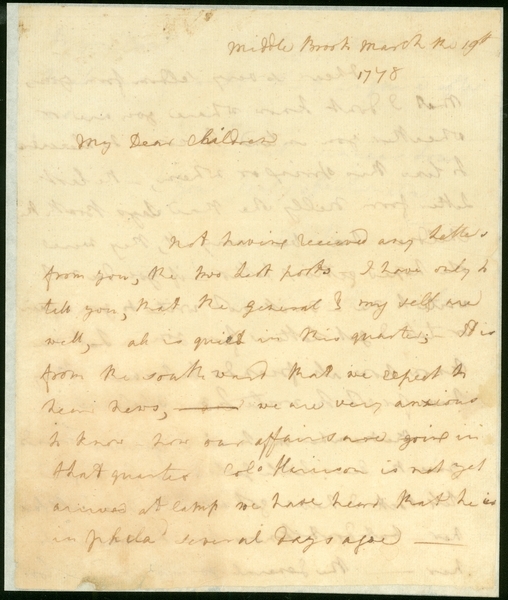 Near the end of her life, Martha Washington described her most painful experience—aside from the death of her iconic husband—as being the day Thomas Jefferson came calling at Mount Vernon, ostensibly to pay his respects. Martha’s expression of distaste for the newly elected third president was both political and personal, and it hints at posterity’s loss when she burned nearly all of her correspondence with her husband upon his passing. Yet a substantial body of Martha’s general correspondence survives and is soon to be published in two annotated volumes.

Martha Washington is one of the most important women in the history of the United States. As the widowed Martha Dandridge Custis, she commanded one of the largest fortunes in Virginia. After she married George Washington in 1759, her wealth formed the bedrock of her family’s prosperity. Martha provided strength and support for George throughout his long military and political career, often joining him in camp at places like Valley Forge. She also adeptly managed many of Mount Vernon’s affairs during her husband’s long absences and was a devoted mother and grandmother. Transcending home and family life, she corresponded extensively with men and women throughout Virginia and the United States, forging important social, financial, and even political connections. While she burned most of her correspondence with George after his death, thousands of letters to and from her remain, perhaps half of them never before published. All will appear, fully edited and annotated, in this new edition.

The Washington (and Custis) family members appearing in the three-volume Washington Family edition include George Washington’s parents, siblings, stepchildren, step grandchildren, and nephew Bushrod Washington (1762-1829). It was a remarkably vibrant family, active in society, politics, and entrepreneurship, and its members all present fascinating character studies. Bushrod, an associate justice of the U.S. Supreme Court who managed Mount Vernon after George and Martha passed away, kept an exceptionally important collection of papers, of which only a portion has appeared in print. Almost none of the papers of the other family members have ever been published. The Washington Family therefore will present entirely new and intriguing insights into the lives of women, children, and men in colonial Virginia and the young United States, while also providing fresh perspectives on the Father of His Country.

George Washington’s diary of his journey to Barbados in 1751-52 is one of the most remarkable items in his collected papers. Previously published only in facsimile and in an outdated 1892 edition, it chronicles the only extended trip that Washington ever took beyond the coast of North America. He kept a formal log of his sea voyage, noting the weather and the sailors’ work as well as the capture of sharks and dolphins. During his stay on the island with his ill older half-brother Lawrence, George kept a full social calendar with the leading citizens of the island. His diary describes these events, revealing the intimate lives of the elites as well as something of the thousands of slaves who worked the vast sugar plantations. Apart from the round of dinners with various citizens, George attended a fireworks display, a play, and a rape trial, commenting on all. He made no entries during his illness with smallpox, from 17 Nov. to 11 Dec. 1751, but upon his departure George wrote several pages summarizing his impressions of the island and commenting on politics, agriculture, social customs, and class structure. Diary entries even include events after his return to Virginia, such as a dinner with Governor Dinwiddie and a cockfight. Although badly damaged in places, the diary (fully annotated in this edition for the first time) presents an entertaining and important resource for the study of Washington, the Atlantic trade, and the West Indies.

Work on this new project will be carried out by three new full-time editors and support staff. Project staff will conduct an extended international document search to identify and procure copies of all relevant correspondence. The editors then will transcribe the documents accurately according to modern standards and will research and write the same kind of thorough and enlightening annotation that has come to characterize The Papers of George Washington. Fully indexed letterpress volumes will be published by the University of Virginia Press and will appear alongside The Papers of George Washington digital edition in the press’s Rotunda digital imprint. In conjunction with this major new extension, the Papers of George Washington project will officially be renamed the Washington Papers. Be sure to check our website, Facebook page, and Twitter feed regularly for updates about this exciting endeavor!