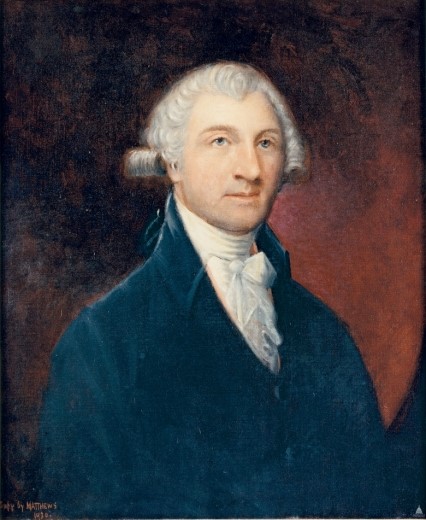 It was a dark and snowy night, and George Washington’s stiff body lay frozen in Mount Vernon’s drawing room.

Three desperate doctors had tried and failed to save him. They blistered his legs, prescribed emetics,1 applied poultices to his swollen throat, and bled him almost dry.2 Martha Washington watched, unweeping yet frightened by the amount of blood pouring from her beloved husband of more than 40 years.

The night had worn on.

Martha, sitting at the foot of her partner’s bed, saw George’s quiet become quieter. “Is he gone?” she asked. George’s secretary (and Martha’s friend) Tobias Lear couldn’t speak. He held up his hand in assent. Martha said simply, “‘Tis well. All is now over I shall soon follow him! I have no more trials to pass through!”3

Sunday dawned, and Tobias, grieving, sent letter after letter, as though he was tolling church bells across the country.

William Thornton arrived later that day—too late, he would discover, to help. He was a doctor, an architect, and an engineer. More importantly, he was George’s dear friend.4

William came “in the fullest confidence of being able to relieve him, by tracheotomy.” When William saw George lying there in the drawing room, he was suddenly “overwhelmed” by the loss of the “best friend” he’d had on earth.5

But then he had an idea.

William had made a special study of sleep, stupor, and resuscitation. He recorded dozens of examples of people and animals recovering after apparent death. He knew of people who had awoken hours after apparently drowning. He knew of fish that revived after freezing, frogs that recovered after being sealed in trees.6

And there lay George, frozen.

Why, William reasoned, couldn’t he bring George back to life?

George, he decided, “had died by the loss of blood and the want of air.” And so, he proposed this plan:

George had been his country’s savior for much of his life. He had a family who loved him. Friends who cherished him. A country that depended upon him.

Who wouldn’t want to have him back and ready to save the day?

Maybe not George himself. He’d only retired from his difficult public life two years before. If, magically, this formula had summoned him from the dead, maybe he wouldn’t have thanked his friends and family for snatching away his peace, finally found.

Indeed, this idea seems to have decided the matter. William was barred from going through with his necromantic attempt. Writing years later, he explained that “it was doubted by some whether if it were possible it would be right to attempt to recall to life one who had departed full of honor and renown; free from the frailties of age, in the full enjoyment of every faculty, and prepared for eternity.”8

Whether or not Martha was part of this discussion is impossible to say. Likely it would have been too upsetting a topic for her.

She couldn’t bring herself to attend her husband’s funeral but stayed on the third floor of Mount Vernon, watching from the window. She might have thought that, at last, he was at Mount Vernon to stay.

But, ever since the Revolutionary War, she had had to fight with public interests to have time with her husband. And even his death did not change this pattern. With the country in mourning, the people wanted to honor and immortalize their hero, prompting Congress to ask to move George’s body from Mount Vernon to the capitol building. Ironically, the building had been designed by the ubiquitous Dr. William Thornton.

Congress, legally and socially, needed Martha’s permission to move George’s body because he had stated explicitly in his will that he was to be buried at Mount Vernon. Martha, as an executor of George’s will, could go against that desire if she wished.9

President John Adams was the person actually in charge of securing this permission from the grieving widow. Not a plum assignment. He attempted to soften the blow, waiting to send Congress’s request together with his wife’s condolence letter.

Both Adams letters are short, but they contrast greatly in tone. Abigail is personal:

I intreat, Madam, that you would permit a Heart deeply penetrated with your Loss, and sharing personally in your Grief to mingle with you the Tears which flow for the much Loved partner of all your joys and Sorrow’s.10

John, on the other hand, is formal and political:

In conformity with the desire of Congress I do myself the honor to inclose by Mr. William Smith Shaw my Secretary a copy of their resolutions passed the twenty fourth instant, occasioned by the decease of your late Consort Gen. George Washington. . .I entreat your assent to the interment of the remains of the General under the marble monument to be erected in the capital, at the city of Washington, to commemorate the great events of his military and political life.11

Martha, receiving these letters, was crushed.

She hadn’t yet wept for her husband—as far as anyone knew—but she did now.

Abigail, hearing later about Martha’s despair, wrote to her cousin and uncle Cotton Tufts that

She was broght to tears upon reading the Letters of private Friendship. . .She was so melted into sorrow, that she was two hours getting through the Letter of the presidents, and one which I wrote her. . .you will see by her replie to the president the struggle she had to bring her mind to relinquish the only consolatory idea she had left her, that of mingling her Ashes with his.12

Martha was already used to sacrificing her own happiness for the country’s welfare. She gave her husband up so that he could be General George Washington, then so that he could be President Washington. She was always faithful. Strong-willed but supportive. She, like George, believed in her duty to the public.

So, she decided to give him up. Again.

She wrote to John Adams on December 31, 1799, giving Congress permission to move her husband’s body. It is her most well-known, most frequently printed letter. It appeared in newspapers across the country. It was so widespread that many in the years following have assumed it was the only letter she ever wrote.

Faithful secretary and friend Tobias Lear supported Martha throughout it all. He had even drafted Martha’s response to John Adams. He would have seen her anguish, and being close to Martha, he would have been pained badly by it. So, he sent his own letter to Adams, along with Martha’s:

After a severe struggle, Mrs. Washington has yielded to the request made by Congress, as you will find in her letter. Having passed upwards of forty years with the Partner of her Heart, it required more than common fortitude to consent to an act which, possibly, might deprive her of almost the only consolation she has had since his decease—namely, that her remains would be deposited in the same tomb as his. Knowing her feelings on this occasion, I have ventured to give her the firmest assurance of my belief that the removal of the General’s body would not deprive her of this consolation, which is so dear to a mind afflicted like hers. And I trust I shall not be disappointed in this belief.13

William Thornton wasn’t able to bring George back to life. But he showed that he was still in Martha’s corner. He wrote to John Marshall, who had proposed moving George’s body in the first place, with a request similar to Tobias’s:

She expressed, in her affliction, the hope of soon lying in the same humble vault prepared for his family, and considered it as the last temporal consolation. The body of her beloved friend and companion is now requested and she does not refuse the national wish—but if an intimation could be given that she should partake merely of the same place of deposit it would restore her mind a calm and repose that this acquiescence in the national wish has in a high degree affected. You, who know her, are not unacquainted with her high virtues, and know that her love for the departed would be the only reason why such a wish could be entertained.14

Congress agreed. Tobias and William pulled through for Martha. She and George would not be separated. They would remain together—immortalized in the public eye instead of resting at home, but together.

One thing after another happened in the years following that prevented Congress from moving George and Martha’s remains from Mount Vernon. Ironically, after all the pain and aggravation, the tomb planned for them in the capitol was never filled.

And so, as they wished, George and Martha sleep together still at Mount Vernon.

1. An emetic is a vomit-inducing medicine.
2. Carroll, John Alexander and Mary Wells Ashworth. George Washington Volume Seven: First in Peace. (New York: Charles Scribner’s Sons, 1957), 624.
3. “The Diary Account.” The Papers of George Washington Digital Edition, ed. Theodore J. Crackel. (Charlottesville: University of Virginia Press, Rotunda), 2008. Tobias Lear wrote two versions of the story of George’s death, both of which are printed by the Papers of George Washington. The annotation to these documents explains that “Lear has changed the timing and sequence of events in a number of cases, altered quotations and introduced new ones, omitted bits of information, and added a good deal of new information.” While James Craik, George’s longtime friend and physician who was also present for the death, endorsed the first account that Lear wrote, it must still be read with caution.
4. Harris, C. M., ed. Papers of William Thornton. Volume One. (Charlottesville: University of Virginia Press, 1995).
5. Ibid., 528.
6. Paulson, George. “Dr. William Thornton’s Views on Sleep, Dreams, and Resuscitation.” Journal of the History of the Neurosciences. Vol. 18, No. 25-46. 2009.
7. Harris, C. M., ed. Papers of William Thornton. Volume One. (Charlottesville: University of Virginia Press, 1995), 528. Note that I broke up this quote, put Thornton’s verbs at the beginning of each sentence, and formatted it into a list.
8. Ibid.
9. I am very grateful to Matthew Costello for his advice on this subject. His dissertation examines the cultural history following George Washington’s death and is titled: “The Property of the Nation: Democracy and the Memory of George Washington, 1799-1865.” We’re excited to welcome Matt to the Washington Papers in October!
10. Abigail Adams to Martha Washington. December 25, 1799. Mount Vernon. Peter Family Collection.
11. “From John Adams to Martha Dandridge Custis Washington, 27 December 1799,” Founders Online, National Archives, last modified July 12, 2016, http://founders.archives.gov/documents/Adams/99-02-02-4107.
12. Abigail Adams to Cotton Tufts. January 9, 1800. Pierpont Morgan Library. Literary and Historical Manuscripts.
13. Tobias Lear to John Adams 1 January 1800. William Reese and Co. Catalogue 292-96 American Manuscripts. Lot 95.
14. Harris, C. M., ed. The Papers of William Thornton. Volume One. (Charlottesville: University of Virginia Press, 1995), 526.