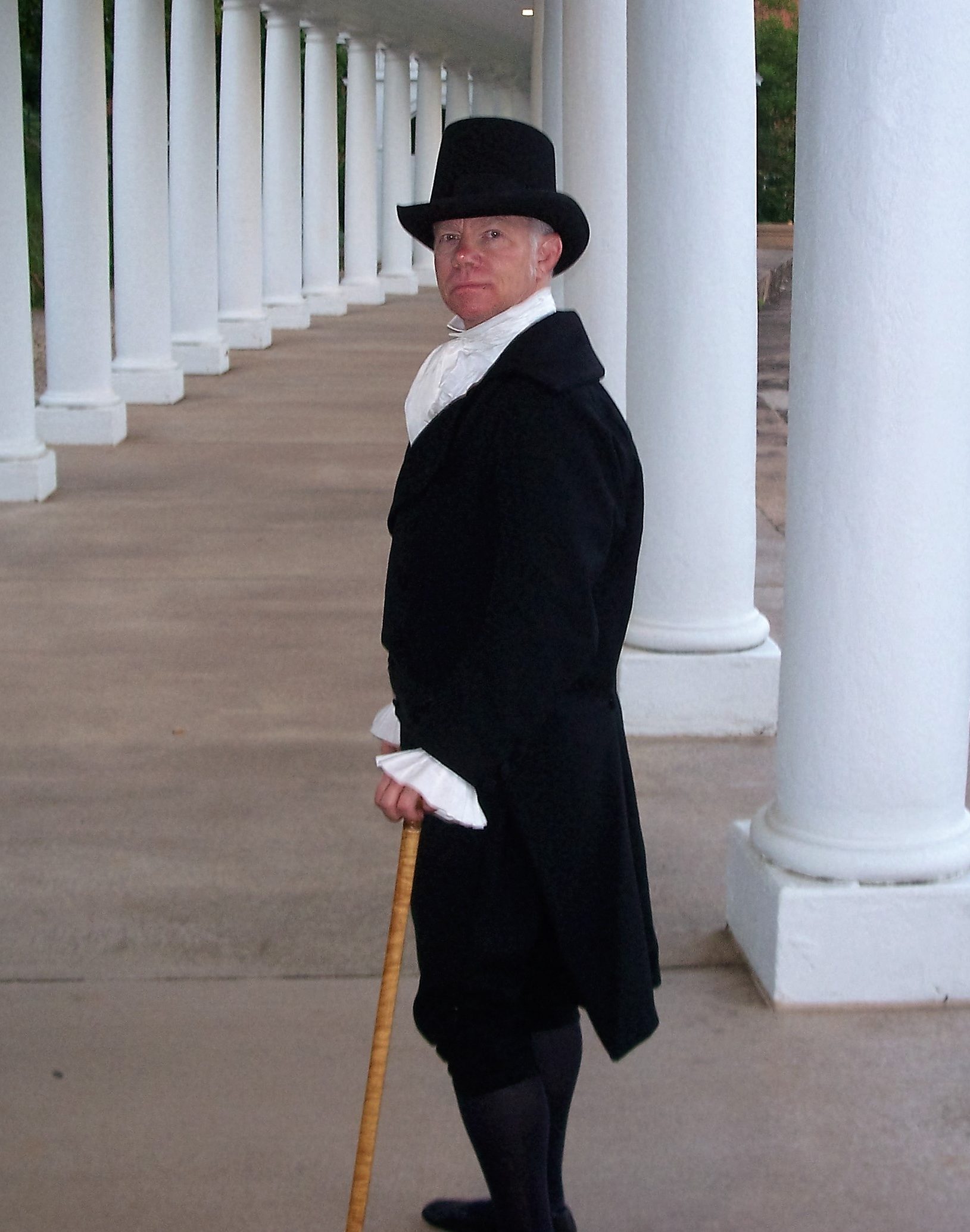 “You have to have a little ham in you,” James Madison recently told me. Or rather Kyle Jenks, the living history interpreter who portrays James Madison, told me.

Jenks and I were having lunch in Gordonsville, Virginia, just a few miles away from Madison’s home, Montpelier. I had the pleasure of meeting with Jenks and Tom Pitz, who plays Thomas Jefferson, to learn more about first-person historic interpretation.

Although I had only just met Jenks, I could already see how enthusiastic and sincere he is about interpreting Madison, a calling that has recently become a full-time job.

Jenks stumbled on his passion for first-person historic interpretation about a decade ago. His friends had encouraged him to act in a historical pageant as an unnamed character, a role that soon evolved into a speaking part. Captivated, Jenks began to participate in reenactments on weekends, and he went on to write, produce and direct Drums Along the Mohawk Outdoor Drama, about the American Revolution in upstate New York. In order to move into the field full-time, however, he had to choose one recognizable figure to portray.

Short in stature himself, Jenks saw James Madison as a natural fit. He also believed that unlike George Washington and Thomas Jefferson, Madison was not receiving the attention he deserved. By choosing Madison, Jenks animated both his own passion and the neglected Madison.

Jenks’s enthusiasm has led him to learn all things Madison, which allows him to more fully inhabit the character and more easily tweak his portrayal. He aims not only to entertain, but also to be taken seriously by academics and historians. For Jenks, authenticity is dictated by attitude. First-person interpretation is a commitment that requires extensive research in order to portray the character accurately and to respond to audience questions extemporaneously. “Performance presentations are thoroughly researched with the use of as many primary source materials that can be found and professionally delivered giving the benefit of a personal touch that only human interaction can provide,” says Jenks.

Knowing that Jenks’s excitement was inexhaustible, Pitz playfully interrupted the conversation: “Yeah, you’re a real piece of work.” It was all too amusing to imagine Jefferson saying the same to Madison.

Even before meeting him, it’s easy to see that Jenks takes his craft seriously. As he explains on his Great Little Madison website, “This undertaking is far more than dressing up and memorizing lines: A quality First Person Interpreter considers his or her craft an homage to their persona. It is a resolute and lifelong commitment to rendering an accurate portrayal. It will always be a work in progress for the serious historical interpreter.”

Some artistic liberty is involved of course. Jenks says that he must use a louder voice when portraying the soft-spoken Madison. He believes that mimicking Madison’s quieter voice would limit his impact; speaking loudly ensures that everyone in the audience can hear Mr. Madison’s words clearly.

The presence of an audience not only alters Mr. Madison’s voice but also influences which topics he chooses to discuss. Pitz and Jenks agree that audiences are most interested in topics that matter most to them, and both interpreters have found that audience questions reveal a lot about what the attendees want to hear.

Jenks and Pitz suggest that our interpretations of the past are influenced by current events. For example, Pitz found that his performances became increasingly popular after the release of Annette Gordon-Reed’s book on Jefferson’s probable relationship with Sally Hemings.

Our understanding of history, then, is fluid, and Pitz and Jenks remind us that history itself is not scripted—as much as it may look in hindsight like it is. For this reason, the two interpreters have produced a play, Jefferson and Madison: Founding Friends that models a conversation among Thomas Jefferson and James and Dolley Madison. True to their philosophy of history, the play has no memorized lines. Instead, the interpreters rehearse an ordered set of talking points, making sure to cover salient topics. Jenks uses direct quotes from Madison he has memorized. Pitz, however, does not. In portraying Jefferson for thirty years, it is as natural for him to play Mr. Jefferson as himself. Pitz does not consider himself an actor. “But once he puts on his wardrobe, he is unable to be anyone but Jefferson!” Jenks comments. Pitz relies considerably on Jefferson’s own writings and speaks intuitively.

Preparing for such performances requires understanding not only their own characters but also the contemporaries of those characters. In one example for his recent performance in a stage play he co-wrote with another colleague, Jenks gave more focused study to the pivotal role the Battle of Plattsburgh had in the Treaty negotiations that ended the War of 1812. For his October 7, 2016 performance at the Massachusetts Historical Society, Jenks studied eighteenth-century documents that shed light on the framers’ deliberations as they formed the US Constitution. This kind of research helps him gain a more nuanced understanding of Madison’s period and of how his milieu shaped and was shaped by his ideas.  Jenks believes that questions about how the framers’ attitudes evolved as they came to a compromise on the Constitution are the very questions that people are most interested in asking Mr. Madison.

In undertaking this research, Jenks was amazed to find that the Constitutional “debates were not about convincing the opposing side; it was a matter of where they could find compromise.” He identifies one quote in particular from Madison that underscores the gravity of this unbelievable task:

But whatever may be the judgment pronounced on the competency of the architects of the Constitution, or whatever may be the destiny of the edifice prepared by them, I feel it a duty to express my profound and solemn conviction, derived from my intimate opportunity of observing and appreciating the views of the Convention, collectively and individually, that there never was an assembly of men, charged with a great and arduous trust, who were more pure in their motives, or more exclusively or anxiously devoted to the object committed to them, than were the members of the Federal Convention of 1787, to the object of devising and proposing a constitutional system which should best supply the defects of that which it was to replace, and best secure the permanent liberty and happiness of their country.1

Jenks’s similar passion to pursue “permanent liberty and happiness” has led him to portray Mr. Madison so wholeheartedly. Reflecting on his career change, he says, “When a passion is so consciously placed in your heart, it’s necessary to push forward.”

But that’s not all that Jenks would like to do. He wants people to understand that interpreting Madison serves an important purpose: to educate. “I believe that serious first-person interpreters have a place in the academic environment to teach students history,” he says. “The onus is on the academic to vet the interpreter to know if they have the body of knowledge necessary for the students attending. Those who take the craft seriously daily feel that onus of portraying a person they do not know personally.”

Pitz adds, “History is all around us. We’re constantly living it.”

Kyle Jenks’s next performance as Mr. Madison will be in Lynchburg, Virginia, at the Riverview Art Space on October 21 from 7:30 to 8:30 p.m. He will be joined by Tom Pitz as Mr. Jefferson in a conversation on the Founding Era prior to a private viewing later that evening of the PBS documentary The Making of Hamilton.

All photos provided by Kyle Jenks.

1. “James Madison: Origin of the Constitutional Convention, December 1835,” Founders Online, National Archives, last modified July 12, 2016, http://founders.archives.gov/documents/Madison/99-02-02-3189. [This is an Early Access document from The Papers of James Madison. It is not an authoritative final version.]